Round 13: Franck Canu vs. Jon Finkel 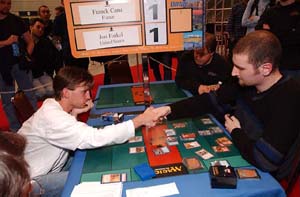 These two players are facing off for the second time this weekend. It seems that Jon has been up at the Feature Match area more often than a normal seat this weekend. There is an electric buzz in the air as the crowd—French spectators aside—want to see the return of Jon Finkel. Back-to-back Top 8 limited finishes should silence his detractors—not that you could find any in the room today!

Both players kept their opening hands and Franck made the first play—he was going second—with a Battlefield Medic. Jon cycled a Backslide at the end of that turn and another during his next turn to find his third land. The Medic snuck in for a point of damage and a Starlight Invoker joined the cleric army.

Jon made a morph on the fourth turn and Franck made an Aven Redeemer. You could hear the lock's tumblers falling into place. Jon did not have a fifth land but he did have a Lavamancer's Skills for the morph. Franck sent his Invoker into the breach and Jon blocked with his morph. When Franck attempted to Erratic Explosion it after combat the stack started piling up. Jon unmorphed a Willbender and aimed it at the Battlefield Medic instead. Franck then used a Shock on the annoying wizard who shot the Aven Redeemer, which used its ability to save itself. Willbender went to the yard and Franck used the Battlefield Medic to put a 3-point shield around itself. Finally...the explosion resolved and flipped over land, land...Pinpoint Avalanche and the Medic died as well. Jon arched his eyebrows at the amount of burn in Franck's deck and made some notations on his scorepad. 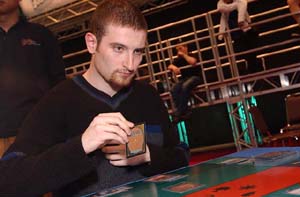 Jon made a morph and Franck made another Starlight Invoker. Ascending Aven from Jon could not get through the Aven Redeemer but it did manage to keep the healer at bay. Franck proceeded to play out a Lowland Tracker, Gustcloak Savior and another Lowland Tracker. It was looking increasingly like Franck was going to win and he urged Jon to play faster, "Can you play with more speed" Jon snorted derisively, "You have been playing much slower than I have." As if to prove his point, when Franck played his third provoker, Jon conceded.

With his back against the wall—the loser of this match has no shot at Top 8—Jon looked through his sideboard for answers. He found a Keeper of the Nine Gales and a Peer Pressure. He shrugged and took out a Backslide and a Riptide Biologist to make room for them.

Franck played out a sideboarded Wall of Hope on the first turn and Jon played a morph on turn three this time, as did Franck. Jon was holding Complicate and thought about sitting on it but instead decided to play his Embermage Goblin. Franck played the dreaded Aven Redeemer.

Jon cycled a Slipstream Eel to find land number five and played it and said go. Franck declined to send his Aven into the morph and passed the turn—wisely as it turns out since Jon flipped up his Ascending Aven and began pecking away with the Goblin. The Aven got in for one point after prevention and Jon sent it back. Franck's attempt at Lowland Tracker met with cycled Complicate. The Aven got in for another point and Jon made another morph. Franck played his Swooping Talon and passed it back to an exasperated Finkel.

Jon played a Mistform Dreamer and said go after peeking at his morphed Willbender. Franck attacked with the Talon right on schedule but when Jon double blocked—hoping to Willbend the Healer—Franck unmorphed his Gravel Slinger and shot the Dreamer. Jon shook his head and used the 'Bender on the Gravel Slinger and the Healer saved the Talon from dying and the Ascending Aven bit the dust. Jon got in another point with the Goblin and untapped knowing he had his work cut out for him.

Jon looked over the cards in hand and decided to threaten the Aven Redeemer and fly over for four points of damage dropping Franck to 10 while Jon was till at 16. Franck provoked and killed the Willbender and played a Grassland Crusader. Jon arched an eyebrow pecked Franck down to 9.

Lavamancer's Skill landed on his Dreamer on the next turn and Jon sent it back to the Frenchman. Franck dealt four with his pumped up flier and played an Aven Soulgazer. Jon shot the Redeemer, which saved itself and pinged his opponent down to 8.

Jon double-checked his score pad; "You're at eight, right?" When the life total was confirmed Jon shot the Frenchman with the Goblin and did the last seven with Searing Flesh.

Jon let out a breath he had seemingly been holding since the start of the game and turned to the judge, "You're watching for speed of play, right?" 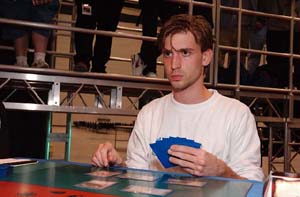 Neither player made any changes to their decks and both kept their openers. Franck got things underway with Whipgrass Entangler while Jon made a Mistform Dreamer. Franck followed with a 3/3 Daru Stinger showing Gravel Slinger and Grassland Crusader. Jon got in for two with his illusion and played a Keeneye Aven.

Franck sent in the Stinger for three as time trickled away for the two players and Franck played an Aven Redeemer. With the Stinger on 'O' Jon was able to swing in for four with his fliers and made another morph. Franck kept his Stinger back and fortified with Grassland Crusader leaving two cards in his hand when Jon asked how many. "And you?" "4" was Jon's reply. He made an Ascending Aven and urged Franck to play faster, "A draw is no good for either of us." The judge agreed and as Franck lingered over his cards he issued a warning and a 3-minute time extension, which earned jeers form the French contingent. "Shut up, Nassif!" yelled Jon.

Franck finally played a morph and swung in with his Stinger on the back of the Whipgrass Entangler and pumped it with the Crusader. Lavamnacer's Skill on the Mistform sent a charge through the non-French onlookers. Jon announced his attack phase and Franck tapped out to use his Entangler. With no mana available for Franck to flip over his Gravel Slinger Jon pumped the fist and let out a triumphant, "Yesssss!" He made his Mistform a soldier and cast Peer Pressure naming soldiers. Jon had three—Keeneye and Ascending Avens and the Mistform. Franck's Daru Stinger and Grassland Crusader betrayed him and wandered over to Jon's team. It was an amazing play and the crowd let Jon know it.

He still had to win the game but that seemed like a formality at this point. Franck had a chance to hang on when he cast a Starlight invoker with 8 more lands available but when Jon Complicated it, Franck scooped to the delight of the crowd.

Jon was now in a position to draw his way into his umpteenth PT Top 8. But would his final opponent enjoy the same luxury?