Round 13: Frankie Bow vs Will Copeman 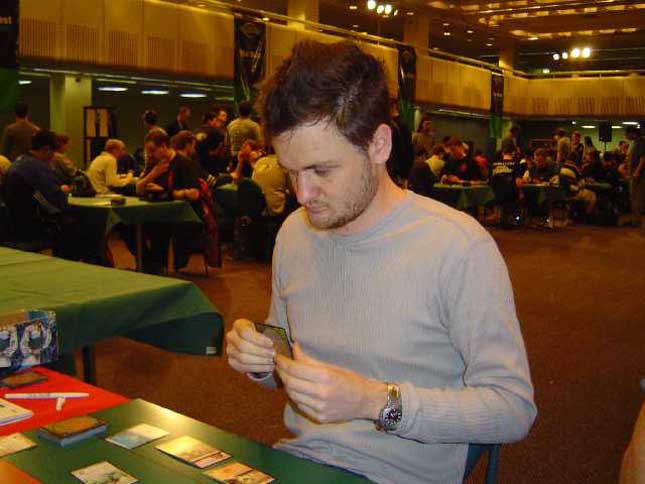 Both players begin the game with Spellbombs, Copeman with a Pyric and Bow with an AEther. The two then match Leaden Myrs but Copeman decides to Spellblast Bows, summoning a Slith Firewalker and sending it and the Myr into the red zone. Bow stalls on two mana but has another Leaden Myr, praying that it'll stay alive long enough to become active. It gets Electrostatic Bolted before the attack phase and Copeman drops down a Vulshok Gauntlets to go with his beat force.

Bow explodes his AEther Spellbomb for a card, pulling a mountain off the top and then summons a Pyric Spellbomb. When Copeman attempts to equip the Gauntlets to his Myr they get bombed in response and the Firewalker is forced to attack alone, dropping Bow to 12 life. Bow decides to do nothing during his own turn but before the attack step casts Thirst for Knowledge, Discarding a Leonin Scimitar. Copeman plays Neurok Familiar, grabbing a Vault of Whispers and then straps the Gauntlets to it. Bow draws a card and then concedes, unable to find the black mana he needed to cast the Terror stuck in his hand.

"Sliths are good when they're mana screwed" joked Copeman as the two shuffled up for the second game. "That wasn't a very exciting game for a feature match" laughed Bow.

Copeman thought long and hard about his hand in game 2 before deciding that it was good enough to keep. Bow got off to the start he was looking for in game one with a second turn Leaden Myr, which was matched by one from Copeman. Bow was forced to explode a Pyric Spellbomb in order to search for a third land, something that he didn't find, and passed the turn. Goblin War Wagon made an appearance for Copeman, but Bow would have none of it, Electrostatic Bolting it at then end of the turn. Bow then found a land and cast Neurok Spy and once again Copeman matched him card for card playing one of his own. This brought comments from the two players about how similar their decks were and that they were playing in a mirror draft match.

Bow decided to Domineer the little Leaden Myr, depriving Copeman of his black mana. Copeman had no need for his splash color and dropped down a Krark-Clan Grunt. Wanderguard Sentry was summoned by Bow revealing a hand of Electrostatic Bolt, Shrapnel Blast and Island. 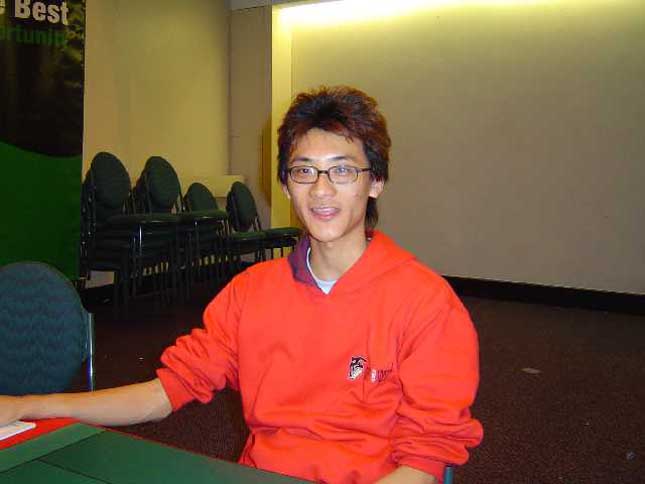 With no evasion ability thanks to the stolen Myr the Grunt and the Spy traded off in Combat and Bow ended his turn. Copeman sent in his own spy and wore 4 damage back on his chin for his troubles. Ogre Leadfoot looked to give Bow some edge on the field and combined with the Sentry it set about reducing Copeman to 0 life. Bow continued to develop his board dropping down a Cobalt Golem.

Copeman continued to attack with his spy and droped down a Duskworker. Bow sent in his Cobalt Golem, the Sentry and the Leadfoot and Copeman had had enough. He sent a Bolt to the Golem but was forced to take 6 damage from the other two creatures. Copeman tried to stay back on defense but a Terror aimed at one of his blockers spelled the end of the game.

"It's a good thing I won that game", whispered Bow, "It would be embarrassing to not win a game in a feature match"

Both players lead off game three with a Pyric Spellbomb. Copeman exploded his for a card and then played out an AEther Spellbomb. Bow on the other hand decided his was best left on the table and simply played out a Leonin Scimitar. Leaden Myr from Copeman was enough to induce the bomb to explode on it during Bows main phase. Copeman played out a Duskworker and Bow matched it with a Clockwork Condor.

The Worker swung in for 2 damage as Copeman decided it wasn't a good idea to pump it up just yet. Krark-Clan Grunt came into play and Bow sent in his Condor, dropping a Cobalt Golem after combat and attempted to put a Scimitar on it. Copeman would have none of that bolting it in response. In went the Grunt and the Worker to deal 4 damage back to Bow, with a Neurok Spy joining play.

Bow summoned a Vulshok Berserker and put the Scimitar on it, pushing it into the red zone with the Condor, dealing 5 damage. Copeman then thought long and hard about his turn, sending in his three men for 6 damage, playing out a Fireshrieker after combat. Bow plays out AEther Spellbomb and sacrifices it to draw a card. No matter how Bow plays his blockers he cant possibly stop lethal damage and the match is over.