Round 13: Gabe Walls vs. Jeremy Pinter 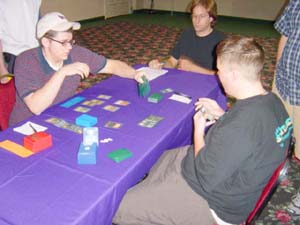 Jeremy Pinter has been enjoying this field. He made day two and has been playing a sea of mono black and zombie Upheaval decks with his white/green madness deck. Indiana's very own Gabe Walls unfortunately was playing one of the decks Pinter was gunning for, Zombie-Upheaval. Walls is hard at work cementing himself as Indiana's #1 Magic player. Walls mentioned he would like to thank The Sports Bench and Don Willis for his success.

Game 1, Pinter won the roll and had to double mulligan. Nevertheless, He managed to get a turn two Wild Mongrel and Basking Rootwalla. He started the beatdown against Gabe who played a turn two Zombie Infestation. Stuck on only two lands, Pinter opted for five points a turn against Walls. Gabe made two Zombies and flashed back a Deep Analysis. This took care of the Rootwalla, but the beats kept coming from the Mongrel. Pinter found his third land and tried playing two Anurid Brushhoppers, but both of them met Circular Logics from Gabe. Gabe was powerless to stop all the creatures from Pinter's deck after this and a Glory sealed the deal for Pinter.

Walls's next game went worse. He was stuck on two lands for the first five turns. He tried to Chainer's Edict Pinter's turn two Mongrel, but a Rootwalla came out to take the bullet. Pinter played a Brushhopper next. Walls had another Edict, which took out he Mongrel this time after Pinter discarded a Glory. Pinter played out a Rootwalla and a Spurnmage Advocate to serve as more Edict bait. Gabe decided to start blocking though and played a Psychatog. This didn't deter Pinter much. He activated Glory to get past the Tog. The next turn Gabe had untapped mana though and he tried sending the Brushhopper back to Jeremy's hand with an Aether Burst. Jeremy removed it from the game. Gabe tried the same thing the next turn with a second burst, and this time he sent the Hopper home. Gabe was still in trouble. Pinter had a Nantuko Monaestary in play with Threshold and several creatures in hand that could gain protection from any color. Gabe switched strategies and played a pair of Innocent Bloods in the hopes of removing some of his attackers. It wasn't enough and the Monaestary and a Brushhopper cut Walls down.