Round 13: Gary Wise vs. Mike Turian 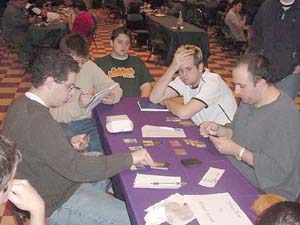 Gary Wise and Mike Turian are both looking to make top 8, but because they have 28 points each, they need to win out to do so. Both players have great resumes to their credit. CMU regular Mike Turian has a Grand Prix win at Montreal and also a Pro Tour top 8. To go along with this he has many other high finishes. The blue/black deck he is armed with is very good, sporting fast creatures and a Voidmage Prodigy (can't keep Kai out of the feature match area).

Gary Wise has what may be an even greater list of accomplishments. He recently placed in the top 4 of Pro Tour Boston as a member of Courtney's Boys and a Worlds top 8 to go with the usual laundry list of high Pro Tour and Grand Prix finishes. Gary's deck is a high-powered red/white deck featuring multiple Sparksmiths and good removal.

The match began with some friendly banter. Gary stole a pepperoni from Mike's slice of pizza, and wished Mike good luck. Both hoped that the winner would reach top 8 no matter who came out ahead.

Gary flipped a quarter to see who would go first. Mike lost the flip, but stole the quarter after being advised to check for double heads.

Beyond the Wretched Anurid, Mike's draw was not good. He had to play out Barren Moor instead of cycling it, indicating a land light draw or a hand full of high casting cost spells. He did have a turn four Ascending Aven, but that was shot down by Sparksmith after Gary summoned a Goblin Sledder to aid his Sparksmith.

Gary summoned a Dive Bomber, further torturing Mike through his Wretched Anurid's drawback. All Mike could do was summon an Entrails Feaster. It looked like Mike was trying to kill Gary through Sparksmith damage, but then Mike showed his trick. In response to Sparksmith shooting the Entrails Feaster, Mike cast Read the Runes for three, sacrificing the treacherous Anurid and the Entrails Feaster that would die anyway. 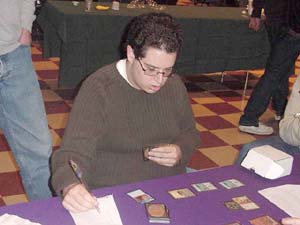 The Sparksmith dominated play for a few turns while Gary attacked with the Sparksmith, Goblin Sledder, and a recently summoned Gustcloak Harrier, bringing Mike to 12 until Mike managed a Crown of Suspicion to finish the Sparksmith shenanigans.

Mike: "Another one? How lucky!"

Mike put up a valiant defense with a Screaming Seahawk and fetched its brother, but it just wasn't enough as the second Sparksmith controlled the board for long enough for Gary to win.

Turian was a bit frustrated by Gary's second Sparksmith, but he had to get over it. He chose to play and again had a turn two Wretched Anurid. Gary, though, had turn one Goblin Sledder and turn two Sparksmith. 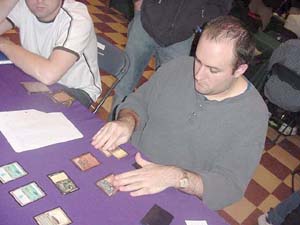 "My draw is pretty good."

Gary also had Sandskin to stop the Wretched Anurid beats and keep his life total at a lofty 17. This game, Turian had a Nantuko Husk to deal with the treacherous Zombie. The Sparksmith took a shot at the Nantuko Husk, and Mike predictably sacrificed the Anurid in response in an attempt to save it. Gary responded with Shock, finishing off the Nantuko Husk and most of Mike's dreams.

Gary kept attacking, bringing Mike down to seven, and Mike finally came up with a creature big enough to survive Sparksmith: Tribal Golem. Even with no special abilities, it is still a 4/4 body.

Gary had a Pacifism lined up and his next attack brought Mike down to a precarious four life. Mike tried for a last ditch Festering Goblin, but Gary had Akroma's Blessing to give all his creatures protection from black and attacked for the win.