Round 13: Grind Taking a Toll 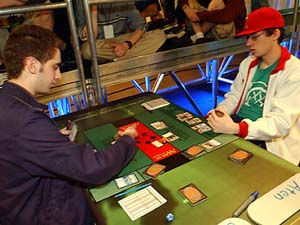 Two of North America's finest Magic writers battled it out.

Aten is coming off an appearance at the Magic Invitational and has an impressive 9-3 record here in London. His other accomplishments include a self-deprecating personality and winning Grand Prix-Chicago as a member of the team :B. Jeff Cunningham, or "Ffej" as he's known to his friends, has been a solid player on the Tour for a good number of years. He has one Pro Tour and three Grand Prix Top 8s to his name.

Tim started off the game with a Shuko and a Hand of Cruelty, which quickly munched a Floating-Dream Zubera from Ffej. He followed with Deathmask Nezumi, and both of his creatures glided by a Blademane Baku to hit for five. He added a land but had no other play.

Ffej held out Sokenzan Spellblade questioningly, waiting for countermagic, but none came. It was, however, returned to his hand by Phantom Wings, and Tim cracked for another five, taking him to 7. He burned down the Hand of Cruelty with Spiraling Embers and, with his last two mana, summoned Akki Underling.

The crucial moment came when Tim attacked with his Deathmask Nezumi, offering a trade. Inexplicably, Cunningham decided to take it and was wrecked by a Throat Slitter that took out his Baku. He put up a fight, replaying the Spellblade and enchanting it with Uncontrollable Anger to take out a blocker, but it's difficult to win when you're behind on life and one of your only creatures has to attack every single turn.

Eventually he passed the turn, facing lethal damage, and when Tim demonstrated a willingness to attack, he picked up his cards.

Between games Tim brought in Psychic Spear for Kaijin of Vanishing Touch. 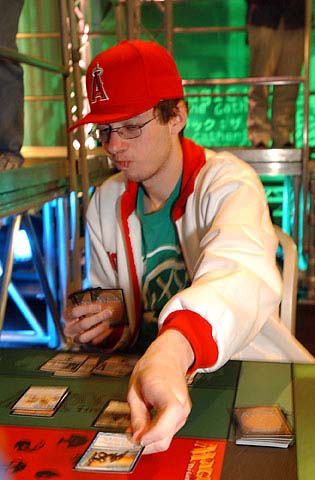 Tim Aten, coming straight at you.

Cunningham mulliganed to start the game, then led with Island and a Dreamcatcher. Tim compounded his problems by Psyching Spearing him for Spiraling Embers, leaving him with Eye of Nowhere and lands. His only option was to run the turn two Eye of Nowhere on Tim's Swamp, cashing in the Dreamcatcher for a card. He found Blademane Baku.

When Tim played out Kami of Waning Moon and equipped it with Shuko, he took it down with Torrent of Stone, a play which seemed a bit hasty. He surely regretted it when Tim added Soratami Rainshaper and Teller of Tales to the board, and then made it all worse when he played Sire of Storms and forgot to put a counter on his Baku.

He noticeably slumped when he saw the mistake, and when his Sire was bounced by Phantom Wings, he just extended the hand.

Ffej just didn't seem to have his heart in the match. Tim advanced to 10-3 and is still in Top 8 contention.