American Mat Marr and I have a long history together. Well, by long I mean we were staying at the same hostel a few days ago. I helped him test his Valakut deck against a Tezzeret deck he was brewing and we chatted about the format. Seeing the Mountains and Forests he'd been slinging for the last two days, I think it's safe to say the 4th-place finisher of Grand Prix LA didn't end up breaking the new planeswalker. But sitting now at 10-2, he's doing quite fine without the Agent of Bolas. His opponent, Vincent Lemoine of Belgium, is the only competitor with a better record at 11-1. Though Lemoine hasn't been in the spotlight recently, he was on the Belgian National Team that finished second at Worlds in 2004 and knows how to get the job done. His solid white-red Boros deck had been performing efficiently all tournament, and there's no reason for it to stop now.

Marr led with a turn-two Overgrown Battlement to stop Lemoine's Steppe Lynx. It worked only so well, as a Marsh Flats quickly made the 0/1 a 4/5 beater. Goblin Guide and Adventuring Gear both followed postcombat as Marr settled in, untapped and visited the think tank. He decided it was time for a Slagstorm, wiping Lemoine's board and leaving the Battlement alone at turn's end. Lemoine refilled with a Stoneforge Mystic netting a Sword of Body and Mind and passed back to Marr. 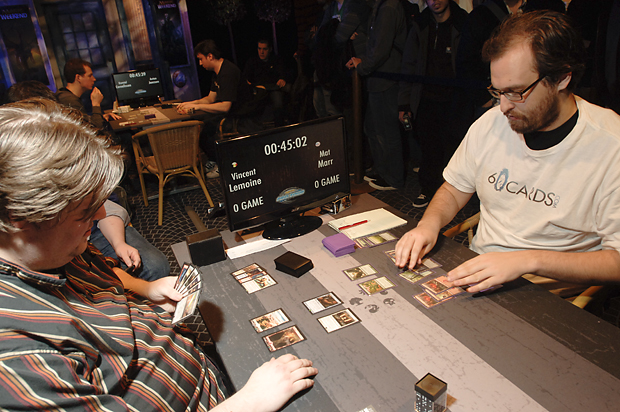 Victor Lemoine of Belgium and Mat Marr of Portland (which is like the US, but weirder).

Marr accelerated with a Harrow and Explore, relatively secure at the moment, and he passed with Overgrown Battlement and two Mountains showing (another two red-producing lands and two Forests tapped). The next turn he bemoaned his overabundance of mana producers as he laid a Lotus Cobra and Evolving Wilds, leaving only a Mountain left in his grip. Lemoine, however, was stuck on two, but could still get the Sword into play with his Mystic. He had found a land next turn, so he equipped Adventuring Gear, dropped the Plains, equipped the Sword, and swung in. The totals became 18-11 in Lemonie's favor. Marr simply drew another land and sighed.

Missing those early drops left Lemoine with a hand full of gas, and when he dropped land number four, Marr could only muse, "Now they're flowing," as he dropped to 6. A postcombat Bonehoard created an 8/8 Germ, thanks to Sword of Body and Mind milling twenty cards over the last two turns. Marr finally drew something other than land—an Avenger of Zendikar that made eight token buddies—and he still had an Evolving Wilds remaining for pumpage. It looked imposing, but Lemoine saw through the ruse; he equipped his Sword to the Germ, giving it protection from green, and swung for the final damage.

As they shuffled up, Marr said, "Since the late game it's more probable for you to continue to draw gas, I can't really punish you for missing land early." With 28 land in his Valakut build, Marr was going to keep drawing land no matter how many he drew in the early game. 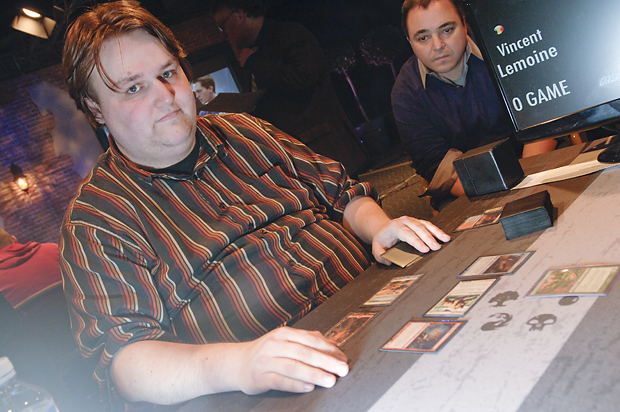 When life gives you Lemoines...

It was quiet for a moment before Lemoine exclaimed while shuffling his opponent's deck, "Wait, you're playing 61 cards?!"

"I did, but I assumed I miscounted."

Mar kept and led with a Ravaging Ravine. His hand was Pyroclasm, Primeval Titan and land, and Mar figured it'd be enough. He topdecked a Khalni Heart Expedition on turn two to respond to Lemoine's Steppe Lynx. The more things changed, the more they stayed the same as another fetch land let the Lynx hit for 4 and Stoneforge Mystic searched up a Sword—though this time of Sword of Feast and Famine]Feast and Famine.

Explore and a fetch land let the Expedition reach three counters quickly. And Marr deftly said, while shuffling his library, "After the Pyroclasm it's your turn." Lemoine smirked and tossed his creatures to the bin. The Belgian followed with a Goblin Guide and Teetering Peaks and Marr, after sinking to 12, sacrificed his Expedition. Marr had drawn gas since we saw his hand last, which now contained two Slagstorms beside the Titan and land. He thought hard before he used the first Storm on the lone Guide and passed the turn back.

Lemoine laid another Mystic but declined to search for an Equipment. He saw Marr tapping three lands and let out a "Slagstorm again?!"

"Yea," Marr responded, passing it back to the Belgian. 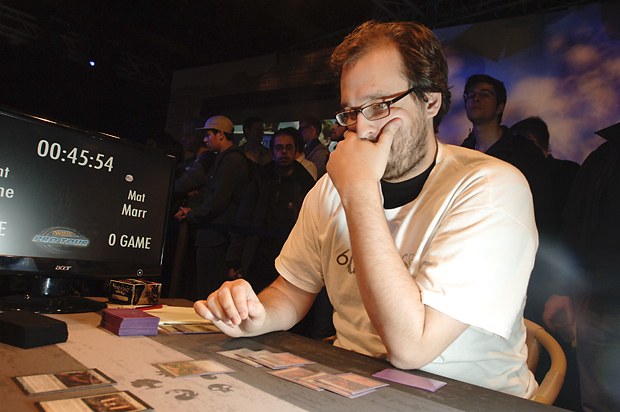 Next, Lemoine had nothing more than a body- and mind-less Sword of Body and Mind, whereas Marr had the Titan who, expectedly found Marr's Valakut, the Molten Pinnacle numbers one and two of the game. Lemoine still had a fetch uncracked, and he could seal the game with his sideboarded Mark of Mutiny, but it was nowhere to be found. He just cast a Goblin Guide, equipped the Sword and attacked. Though it wasn't the killing blow, Marr was on the ropes; it was 18-4 and Lemonine had a Guide and a Wolf (now equipped with the pro-green-bestowing Sword).

But as any Standard veteran knows, no matter your life total, a Titan plus two Valakuts means you're probably going to die. And die Lemoine did.

"Swing, and do 12 to you." Marr said as he searched up two Mountains each triggering the two Valakuts. Lemoine rightly blocked with his Wolf, taking a few points of trample damage. But Marr had the final card all along; after combat he laid down a Mountain and took Lemoine to zero.

These two have both been grinding tournaments for a while, and they and swapped stories back and forth, mostly about Lemoine's great finish in San Francisco—incidentally the first tournament Oregonian Mat Marr had ever traveled to play Magic.

As they talked, a judge came by and dropped some Wolf tokens off to Lemoine, eliciting from Marr: "Oh that's not good! Three wolves?! You're going to get three Wolves?!"

The fetched lands cast a Stoneforge Mystic, nabbing a Bonehoard. Koth of the Hammer was among the hits in Lemoine's hand, but he lacked the resources to cast the red beatstick. Mirran Crusader joined the ranks, and though when Marr tapped three lands, Lemoine preemptively assumed Slagstorm, it was actually a less threatening Harrow to add the second and third counters to the Khalni Heart Expedition.

For more fun land shenanigans (or land-nanigans), Marr played Explore into a Raging Ravine. However, he still had no defenders for Lemoine's Crusader and Mystic, and the totals became 17-12 when they hit (Man, that double strike hurts!). Koth was still a land away.

Primeval Titan hit the board with a slam and grabbed a Valakut and the sixth Mountain, killing the Crusader. The green trampler wasn't long for this world, however; it went on a Journey to Nowhere after Lemoine cheated in a Sword of Body and Mind at the end of Marr's turn. He then took the American to 9 after his creatures attacked. They, much like the Titan, were doomed to die, thanks to Pyroclasm.

After playing the 'clasm, though, Marr hit the table and groaned loudly. He realized that he'd unknowingly tapped one of his only two Forests to cast the sorcery and was now unable to cast his Titan this turn. It was a large blunder; would this be his undoing?

Lemoine found the fourth land, cast Koth of the Hammer, and used a Mountain to take Marr to 5.

"If the last two cards are Lightning Bolts I'm going to shoot myself." As Marr was laying his Titan and killing Koth with Valakut and Mountains, he couldn't stop naming ways he could die. He just kept listing, and there were seemingly unending possibilities. Lemoine did have five cards between his fingers. And they were obviously all gas. Were they the right mixture of octane and heptane?

Lemoine slowly drew his card for the turn…and then packed up his cards. Many possibilities, but no realities. A potentially bad blunder from Marr, but he emerged unscathed.

3 Slagstorm 2 Koth of the Hammer 4 Pyroclasm

1 Bonehoard 3 Koth of the Hammer
50 Cards