Round 13: Having Your Cake and Eating It Too

Pro Tour is 10 years old, happy birthday the Pro Tour! What's the best way to celebrate anyone's brithday? With cake, obviously! At the start of the 13th round, the announcement was made that there would be cake for the competitors once they had finished their match. Gabe Walls promptly thrust out his hand to his opponent, Masashi Oiso. 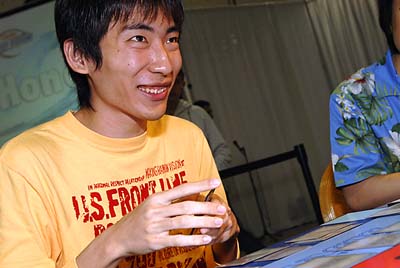 Masashi Oiso smiles, for he knows cake is on the horizon

Naturally, Oiso just grinned (as he often does) and shook his head. Probably because both players were 9-4 and living on the cusp of Top 8 eligibility, and now no doubt both regretting their decision to play control decks. In Oiso's case, the four color Gifts Ungiven deck that he built with Kenji Tsumura, and for Walls, the Loxodon Hierarch deck created by the Hawaii Beach House crew. A green/white/black control built around the rough, tough and ready 4/4 elephant that everybody seems to love these days.

For Walls, there's only one thing more important than cake, and that's banter. Well, maybe not better than cake, but still important never the less. Not two turns into the match, Oiso was messing around with his Sensei's Divining Top.

"No land though? Ow, you're so lucky! Sooo lucky!" As Oiso dropped his third land into play.

Walls then played out a Phyrexian Arena and a Loxodon Hierarch over the next two turns, and Oiso was throwing it back with a Hierarch of his own, albeit considerably quieter than Walls.

But Walls was too distracted to notice. Paul Rietzl had just come over to watch with a plate of cake, and Walls was practically salivating as Rietzl shoveled forkful after forkful under his nose.

"I hate you so much," complained Walls, "go get me cake."

Oiso made a Greater Good and sent his Hierarch in for a tangle. Walls threw his in front, and once damage was stacked Oiso ate his Elephant with the Greater Good, no doubt pretending it was cake. Oiso ditched three Wrath of Gods to the enchantment and passed it back to Walls, who had somehow managed to refocus his attentions on the board. Walls untapped and leveled a Cranial Extraction right at Oiso.

"Yosei …Yeah, I'm soooo good!" as he snatched one from Oiso's grip.

Oiso made another Elephant, and Walls came back with a Faith's Fetters on the Greater Good. Oiso put his head down to have a good wee think about eating another elephant in response, and this got both players thinking about cake again. Eventually, it is decided that the elephant should get a reprieve, probably because it's generally not as tasty as you know, cake. 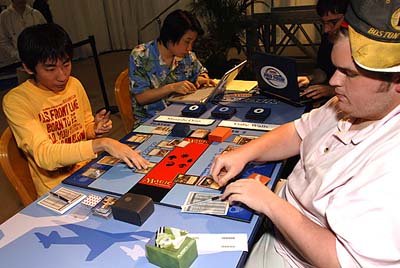 The combatants battle while waiting for cake

Oiso then attacked with the elephant and backed it up with a Kokusho, which didn't seem to make Walls especially happy, but the Wrath of God off the top of his deck soon cheered him up. A Castigate revealed a Reclaim, a Recollect and a Goryo's Vengeance, which joined the four Yosei, the Morning Stars in the removed from the game pile. Oiso untapped and again activated his Divining Top, slyly sliding the third card down to the top of his deck, and flipping the Top to get a new Greater Good into play.

Oiso worked his Top again, this time digging up another Loxodon Hierarch.

Walls sent in another Cranial Extraction, this time for Kokusho.

"It's hard for you to win now," Walls clarified, but Oiso just pointed at the Loxodon Hierarch he had in play and of course, grinned. "I'm an idiot." Walls decided, but Oiso scooped anyway, knowing full well that the Phyrexian Arena would feed Walls an answer much sooner than later.

At this point, Chris McDaniel fronted up with more cake.

"This is good cake," he teased. Walls ignored him until Rietzl showed up again.

"Cake and drinks for me and Masashi or the split's off!"

Oiso was forced to mulligan, and while he was shuffling for the second time, Rietzl again poked his head over the barrier.

"Masashi, cake," he said holding out a plate for the Japanese all-star. Walls just glowered.

"I know you have some for me behind your back, give it to me!"

Rietzl conjured up the second plate, but Walls was not mollified. "Where are the drinks?!"

At Walls' request, Oiso mulliganed again, this time to five, to give Walls time to eat his cake. By the time he had finished shuffling and passed his deck over to Walls, there was naught but crumbs left on the American's plate. Oiso got all of one bite of his cake past his lips before the judge leapt in to confiscate it.

"No food in the playing area, guys" he admonished the players. Oiso looked heartbroken. "You can have it when you're done playing." 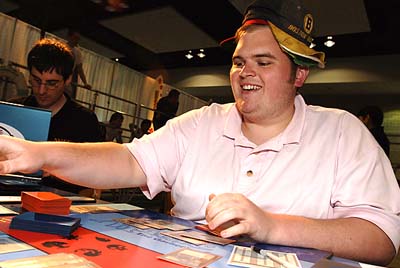 Game 2 kicked off with Walls once again throwing a Cranial Extraction at Oiso. Despite Oiso having mana to play it and not doing so, Walls named Gifts Ungiven and once again his aim was true. While searching for the additional copies, Walls' jaw hit the floor.

All Oiso could muster in reply was a Kodama's Reach and a Sakura-Tribe Elder. Walls summoned a Loxodon Hierarch, and Oiso had nothing. Walls upsized his team with another Hierarch and this time Oiso tore a Kokusho off the top to face them.

"Man!" Walls exclaimed, "soooo lucky! …I'm luckier though, but that's just how the cookie crumbles." He said, dispatching the Dragon with a Mortify. Again Oiso has nothing. Walls toke his time on his turn, trying to figure out just how his mana works.

"Why is this so hard? I'm trying not to mana burn!"

Walls dropped a Signet and finally managed to play a Distress, taking a Goryo's Vengeance out of Oiso's hand. Grinning, and with Top 8 contention on the line, Oiso windmill-slammed his next card directly into play.

It was a Greater Good, which does very little in the face of a stampede. The two friends shook hands and Oiso finally got stuck into his cake.