Round 13: Helder Coelho vs. Marco Blume 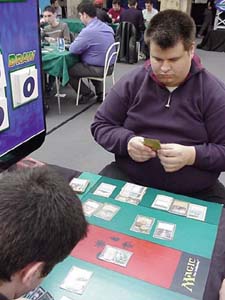 Despite his having won a Pro Tour this season, few people know Marco Blume, the former German National Champion. When I asked him what he was famous for, Marco replied "Because I am cool", he continued to add, "I think people know who I am because I am friends with Kai Budde". He then looked at his opponent and said "You want to be Friends with Kai B too don't you, admit it"

Helder Coelho is widely regarded by the international community as the best Portuguese player. Having won GP Lisbon the last time the circuit came to town, Helder was defending his crown, and at 8-2-2, they were both looking to win out into the top 8.

Marco won the dice roll and decided to go first, and opened with a Treetop Village. Helder played a Savannah and cast Land Grant revealing Daze, Daze, Land Grant, Sleight of Hand, Wild Mongrel and Meddling Mage. Next turn he cast the second land grant, revealing the Swords he had drawn off the top of his deck.

He then cast Meddling Mage to which Marco said "Good Good" and Helder named Oath of Druids. Marco untapped and Swords the annoying creature, Helder didn't put up a fight.

Helder untapped, cast Sleight of Hand before adding Wild Mongrel to the table. Marco just drew a card, and said go, much as Helder did on his following turn, although the Mongrel attacked Marco down to 18.

Marco Tried for an Oath of Druids, Helder Forced removing Daze , but Marco had the Counter and 1 mana free, so the Oath resolved.

Helder continued to attack with the Mongrel, but on Marco's turn he Oathed up a Weaver. Helder tried to Swords, and Marco removed the counters to put it in the bin instead. Helder then dropped a very large 6/6 Enforcer to give Marco as little time as possible to find the answers.

Helder cast a Land Grant on his turn before attacking with the 6/6 Enforcer and the Mongrel, leaving Marco at 6 life. He Oathed up a Feeder however, which could possibly be enough to buy him another turn to get the Weaver on his next turn.

He then Oathed up the Weaver, and it became apparent that the game would be won or lost on Helder's next turn. Helder attempted to swords the Weaver at end of turn, but Marco simply countered and looked good for the game.

Helder attacked, and Marco fogged, Helder then passed the turn, but Marco added the counter from the feeder to the Weaver at end of turn, and then Oathed up the Morphling. He also resolved a Powder Keg on his turn, and this game was effectively over.

In Helder's turn he attacked with the Enforcer, and Marco Brainstormed into Swords, which resolved removing the Enforcer from the game. Helder then made a Winter Orb, which with keg in play was much less of a Threat, so Marco let it resolve.

Marco then examined his creature superiority and passed the turn. Helder Oathed up a 4/4 Werebear to which Marco yelled "Monster!" He added the second counter to the keg, and at that point it remained unclear why Helder was still playing this game.

At this point Marco said "Do you want to play on? It's not going to be close I promise"

Again both players kept their hands, and Helder opened with a Flood plains, and an Island, and then made a Meddling Mage naming Powder Keg. Marco Brainstormed at end of turn, looking for a Swords or Pyroblast with which to deal with the Mage. Indeed he found one, and cast it on his turn while Daze proof. 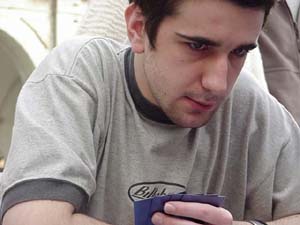 Helder revealed his hand the next turn to cast Land Grant, and showed Wax/Wane Sleight of Hand, Savannah, Hidden Gibbons. Helder's Hidden Gibbons Resolved and next turn Marco made a Powder Keg to deal with Winter Orbs and other 2 mana threats.

Helder resolved a Seal of Cleansing on his next turn, used it to destroy the keg, and then dropped a winter orb. However Marco had a backup keg, which brought a Groan from Helder.

Marco untapped used Swords on the Mystic Enforcer, Disrupted his own Swords and Drew oath of Druids from the Disrupt (Which he paid for). He then resolved Oath, and said "Come on admit it, it was a good play"

At one life, Marco activated the Oath and Oathed up a Spike Feeder, which would get him back to a more manageable life total. Marco untapped and then made a backup Oath of Druids. Marco blocked the Feeder gaining 4 life and then played Mystic Enforcer allowing Marco to Oath twice. He first Oathed up Weaver, and then followed it with Morphling.

"I Promise you're not gonna win this game, I'm being honest with you"

Although at one point it felt like Marco could lose, having drawn both of his Gaea's Blessings, Helder was out of counters. Both Blessings resolved ensuring the Oath lock remained intact.

Helder stubbornly refused to concede until the very last turn of extra turns, and GP Lisbon saw yet another 1-0 win.