Round 13: Hiroki Hayashi vs. Kiyotomo Kageyama 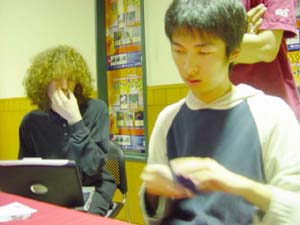 Hiroki Hayashi is a known commodity in Japan. He won the first High School Championships, a testament to his constructed prowess. His opponent is Kiyotomo Kageyama of Osaka, delighted to find himself within striking distance of the Top 8. Both sit at 9-3, needing to win out to have a shot.

Hayashi attacked with his Shade. He traded it for the Hawk, and then tapped out to Rancid Earth Kageyama's island. Kageyama hit for three more and passed it back. Main-Phase Tainted Pact scored Hayashi his fourth swamp, and he gave it back. Kageyama's next attack brought Hayashi to thirteen. He Sludged away Glory, Battle Screech and Beloved Chaplain.

Kageyama brought him to ten, but knew things were dicey. Diabolic Tutor got Hayashi his Mutilate. He wrecked Kageyama's board at seven. Kageyama rallied with Beloved Chaplain and Spurnmage Advocate. Hayashi smashed that up by Scrying for zero to put himself at threshold, and then playing Rancid Earth. Next turn he cast Haunting Echoes. Kageyama looked at his packed graveyard and scooped. Both players kept two-land draws for Game 2, but Kageyama had the benefit of a pitched Deep Analysis. It turned up nothing, while Hayashi Blooded away his Tireless Tribe and played Nantuko Shade.

All Kageyama could manage was a Suntail Hawk. Hayashi hit for two and played Diabolic Tutor. He got himself Cabal Coffers. Kageyama made a Tireless Tribe. Hayashi smashed, and forced two pitches with his Shade. They were both Standstills. He added a second Shade.

Kageyama pitched Deep Analysis and drew from it, finally finding a third land and making Spurnmage Advocate. Hayashi hit again. Kageyama blocked both Shades, keeping his Advocate safe. Hayashi pumped both, and then Tutored up Screams of the Damned. Kageyama made another Advocate. Hayashi dropped the Screams.

Kageyama was in a bind. He thought for two minutes about his next play, then decided on Stern Judge, passing it back. Hayashi Scryed for one at end of turn. He untapped and tapped his Coffers for five, pumped each of his Shades once, and actived the Screams. Kageyama pumped his Tribe with Battle Screech. Hayashi let it resolve before pumping both his Shades again, and Screaming, letting Kageyama keep an extra card. It didn't matter. Kageyama had nothing in hand, and conceded the match.