France's Antoine Maugard is riding high at 10-1, playing one of the apparent pillars of the format, Affinity. The Modern banned list takes a heavy swing at Affinity, but even with most of its toys stuck in the box, the deck remains a powerful force capable of explosive starts. Across from Maugard sits Jesse Hampton, who admits he didn't expect to be 9-2. He did very little preparation, trusting instead in the deck handed to him by Travis Woo: Red-Green Twelvepost.

A first-turn Grove of the Burnwillows for Hampton suggested bad news for Maugard's Affinity deck. If Hampton was playing Punishing Fire, he could dismantle whatever offense Maugard put together. Hampton played a second-turn Wall of Roots and passed it back. Maugard played Inkmoth Nexus, animated it, then played a cascade of three Frogmites. 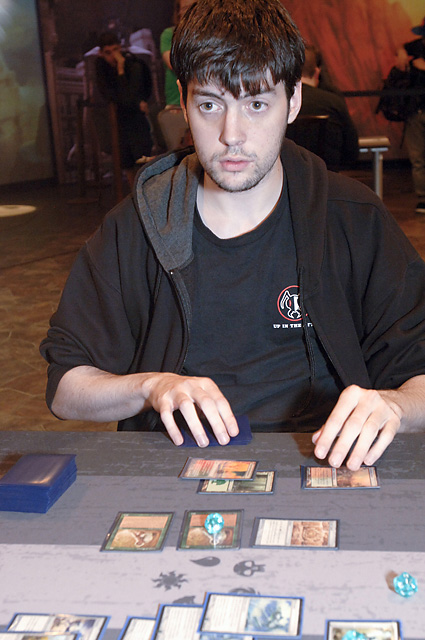 Josh Hampton did very little testing with his Red-Green Twelvepost deck, but that doesn't seem to be hampering him much.

Hampton put up more shields with a Gruul Signet and a second Wall of Roots. Maugard played Springleaf Drum and Arcbound Ravager, then hit for 2 past the pair of Walls. Hampton counted up Maugard's side of the board and decided it was time for Primeval Titan, which brought along a pair of Cloudposts. Lastly, Hampton played Eye of Ugin, and passed.

Maugard verified that Hampton held only two cards and frowned at the situation he found himself in. He made a Cranial Plating and hooked it up to one of the Frogmites. It swung in and ate a Wall of Roots. Hampton swung back with Primeval Titan, this time getting two Glimmerposts, gaining 8 life to go to 26. Maugard declined to block. After combat, Hampton summoned Ulamog, the Infinite Gyre to take care of the Inkmoth Nexus before it could get in a lethal hit. Maugard's back was against the wall. Rather than draw out the agony, he conceded.

Maugard blazed out of the gates in the second game with turn-one Springleaf Drum, then turn-two Inkmoth Nexus, Arcbound Ravager, Mox Opal, and Cranial Plating. Hampton's lone Stomping Ground appeared massively outclassed. However, he had a Grove of the Burnwillows to follow it up, and immediately cast Punishing Fire on Arcbound Ravager. Maugard chose to let it die. 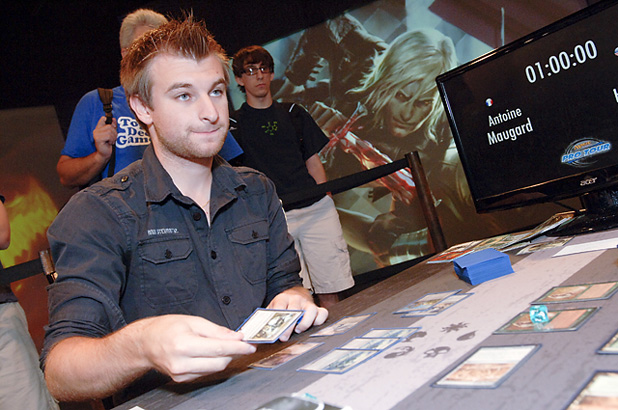 He untapped, animated his Inkmoth Nexus, played another, and equipped it with Cranial Plating. After another animation, the total stood at six poison. Hampton played a second Grove of the Burnwillows and passed it back.

Now Maugard was in a pinch. He couldn't act while Hampton threatened Punishing Fire. He played a Blinkmoth Nexus and passed, so Hampton picked up his Punishing Fire. Hampton played Glimmerpost and passed back. A Glimmervoid for Maugard meant that he could finally toss Cranial Plating to his creatures at instant speed. He animated both his Inkmoth Nexi and swung in. Hampton was forced to go to eight poison, then burn away one Nexus at end of turn. If only Maugard could find another one.

Hampton wasn't about to let him have the time. He played his fifth land and cast Through the Breach for Emrakul, the Aeons Torn, earning a cheer from Travis Woo on the sidelines. The Eldrazi horror attacked and annihilated six permanents, leaving Maugard with just a very lonely Inkmoth Nexus and 7 life.

The game went on for several turns after that, but with Punishing Fire recursion going, Maugard's defeat was inevitable.

3 Beast Within 4 Through the Breach

4 Through the Breach 3 Punishing Fire