Round 13: Jeff Fung vs. Tommi Hovi 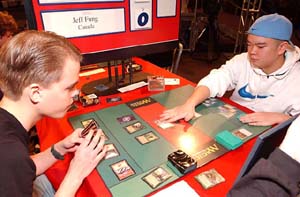 Raucous Canadian Jeff Fung and stern Finn Tommi Hovi tend to run hot and cold, but to differing degrees. When Hovi's hot, he's HOT - the Finn was the first player ever to win two Pro Tours. When he's cold, he just hangs around the middle of the standings, not making much noise. When Fung is hot, he's capable of Top 8'ing, as he did at Chicago a few years back. Fung also managed to win Grand Prix Hong Kong, which is why he's here today. When he's cold, however, he drops off the face of the earth.

They're both running hot today. By winning out, one of them can be in the Top 8 of this event. Hovi was running the red/green Shower of Coals special, and Fung had the blue/white Aboshan deck, splashing green for Mystic Enforcer.

The stench of nervousness and cigarettes hung in the air as the two competitors shuffled up. Hovi lamented aloud about the bombs in Fung's deck before the die roll. Fung simply smirked.

Fung played first, but Hovi had the first plays with turn one and two Chatter of the Squirrel. Fung had quick plays of his own, including Mystic Visionary and Pilgrim of Virtue - quite adept at holding off squirrels. Fung continued to develop his defensive army by playing out a Mystic Zealot and an Aven Flock. He emptied his hand on the next turn, playing Puppeteer and Hallowed Healer. 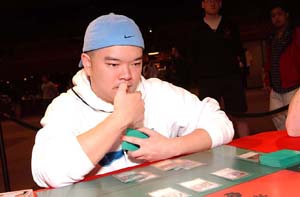 H-to-the-Izzo, meanwhile, was slow-rolling it. He had six cards in hand, and was swinging with a Krosan Avenger backed up by a Nantuko Disciple. Flame Burst took out Fung's Healer, but the Canadian topdecked a second Aven Flock and attacked Hovi down to 11.

Hovi Thermal Blasted one Flock and knocked Fung to 11 as well. He then started taking a long time between phases, as the race was close and Hovi had a grip full of good spells including Shower of Coals.

Eventually Hovi was forced to deal with Fung's Puppeteer, as it was the biggest wrench in the Finn's plans. The Shower rained down on it and Fung's head, and the game slowed to a crawl. Fung's had to assume the defensive until he could get more information about Hovi's hand.

Fung was distressed when Hovi Reckless Charged his Krosan Avenger. The blue/white mage blocked with his Pilgrim, but Hovi activated the Nantuko Disciple and trampled over for five. Both players were now at four life, as Fung had been pecking away with Aven Flock.

If Fung had drawn a card to give himself threshold, he could have sent the Zealot to the sky and sailed over for the win. But it wasn't to be, and Hovi cast Minotaur Explorer, Reckless Charged it from the grave, and ran Fung's defenses over.

"LAME!" exclaimed the outspoken Canadian as he offered to switch Hovi's number on the scoreboard. "It won't happen again." 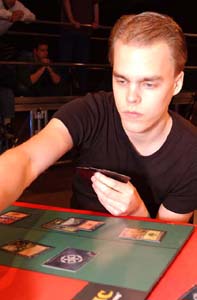 Game 2 started poorly for Fung as he had to mulligan going first. Hovi started right in with the Chatter beats, but Fung had Angelic Wall ready, backed with Divine Sacrament. However that's where Fung stumbled. He had no blue sources in play by turn five, and Hovi started turning up the heat with Nantuko Disciple, Ember Beast, and Reckless Charge.

Fung was at 10 life and his wall was dead to a Thermal Blast before he managed to draw his first Island. He sacrificed his Abandoned Outpost to summon Aboshan with hopes of frightening Hovi into concession.

Hovi was not scared, and sent over the team, bringing Fung to three.

"I hate Finland SO MUCH!" exclaimed Fung, in mock outrage.

Hovi smiled, and killed the deflated Canadian on the next turn.

Had Fung even gotten three Islands into play, the Cephalid Emperor would've taken over. Alas, it was not to be.