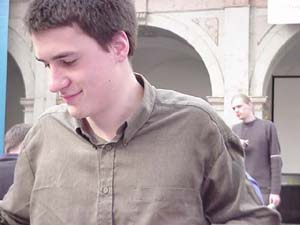 At this point they are firmly on the "if we win the last two rounds we can still make the top eight" category. Both of them have Pro Tour Top 8 in their resume and are highly recognizable names in the European Grand Prix circuit.

Bastos showed his hand (Swords to Plowshares, Daze, Gush, Sleight of Hand, Wild Mongrel, Quirion Dryad) to use a Land Grant. Jelger let a Meddling Mage through - naming Oath of Druids - but promptly dropped an answer for it in the shape of a Powder Keg.

The Portuguese launched in card-drawing mode including three Sleight of Hand, Gush and Brainstorm quickly reaching threshold. He then played a MegaBear. The two creatures brought Wiegersma down to twelve before the Keg caught up with them.

The Dutch used a Gaea's Blessing to shuffle up three cards from Bastos' graveyard, a little seen play that allowed him to push the Portuguese away from threshold.

That clever play allowed him to take another hit from the two creatures, this time only for three damage down to nine life. In fact he took another threshold hit down to three before playing a Fact or Fiction:

Jelger took the second pile. Finally the Keg took the pain away and the Dutch replaced it with another. He then countered Bastos' Quirion Dryad before letting a Werebear resolve.

A hardcast Weaver survived a Force of Will fight to make into play and Jelger now had a way to stop the beatings. On the following turn Frederico put his long seen (remember the first Land Grant?) Swords to use on the Weaver.

Wiegersma fished for an more options, while holding a Thwart before letting the Swords resolve. The Keg blew away the bear and Jelger Thwarted a Mystic Enforcer. The game was now hanging on the brink and could fall either way.

An Intuition gave the Dutch an Oath and Frederico let it in uncontested. He tried to lock up mana with a Winter Orb. Another Fact or Fiction took the wind out of Frederico Bastos. With Feeder, Morphling and some powerful spells in the mix the piles were hard to split.

With the assurance of the Oath and a Keg Wiegersma's Treetop Village started to mount the comeback. He had to stretch to keep a Quirion Dryad out of table (Impulsing for a Accumulated Knowledge that netted him the Counterspell) but he let a Wild Mongrel resolve.

The Mongrel attacked for a last desperate shot and Bastos tried to Sword the lone blocker (the Village). Jelger Impulsed Thwarted and the creatures traded. They were back to square one, well square ten for Jelger - who had a Keg and an Oath - and square minus a hundred for Bastos who had a bunch of lands and one card in hand.

Eventually Frederico saw he couldn't sneak a win out of this one and conceded to save time.

Frederico: "Jesus! That was soooo close."
Jelger: "Yeah, I know."

The Portuguese opened the second game with some sideboard hate in the shape of a Phyrexian Furnace before dropping a Quirion Dryad. He followed that with a Brainstorm, Gush and Werebear to come out of the gates as quickly as possible.

Wiegersma dump a bucket of cold water on his head with a Powder Keg and a Back to Basics. Things were looking bad for the Portuguese and his creatures could only take Jelger down to nine before the Keg took them away.

In came another Keg and with his mana partly locked up Frederico Bastos could do little more than stare at his opponent. The second Keg took out the Furnace and the Dutch could now use his graveyard to its fullest potential.

A second Basics got a huge groan out of Bastos before he Forced it. Gushing helped him rebuilt his mana but he got his Werebear countered and a second Basics resolved.

Frederico: "This will be a tough one." 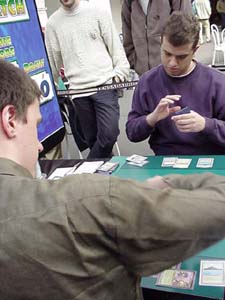 Frederico Bastos He had less than ten minutes to pull this game simply to draw the round. His next spell, against a Werebear, was Forced. Jelger got an Oath out and could happily sit behind it and just stave out any attacks.

The jitters of the pressure were getting to Frederico Bastos who cast a botched Land Grant showing his hand only to find out he had no lands left to fetch.

Frederico (laughing): "Maybe I shouldn't have shown you my hand. I suck at this."

Wiegersma suddenly let his guard down and let Bastos resolve a Quirion Dryad and a Seal of Cleansing resolve. The Seal took out the Oath and it turns out Jelger was just messing with Bastos. He tried to play a Propaganda to again lock up the red zone but three Force of Wills later Bastos survived the Propaganda.

Amazingly, it seemed the Portuguese could find a way out of the Back to Basics mess. Again the Dutch seemed to be toying with him as he dropped a Spike Weaver and blocked with both the Weaver and the Village to take down the Dryad.

After another batch of card drawing Jelger Wiegersma found, and played, an uncontested Propaganda, and a Powder Keg setting up a defensive line that could not be broken in the dwindling seconds of the round.

Tired of the totally locked up table Frederico Bastos conceded seconds before the round ended.