Round 13: Jens Krause vs Mats Högdahl 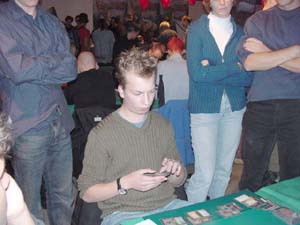 Mats and Jens are two players lacking the resume of people like Kai Budde or Antoine Ruel but they are proving they know how to game at this GP. Both are within striking distance of the top 8. Jens needs 3 more points to make it whereas Mats was actually hoping to double ID his way in. Jens would have nothing of that though and he was forced to play it out.

Mats played first and led with a mountain, a swamp and a Wretched Anurid. A start that can easily overrun a slow deck or a bad draw. Jens countered with the perfect answer though, a Disciple of Grace. Mats Shocked it and the Anurid came in for 3. A Pacifism turned it into a liability the turn after as Mats couldn't even chump something to get the Anurid off the board. When Mats' morph creature got Swatted he could only shake his hand and say go, seemingly out of creatures.

Jens didn't exactly have a beatdown draw himself though and all he could come up with was a Battlefield Medic and a facedown creature of his own. An Aphetto Vulture took the fight to the air. Mats had to be careful at this point as his Pacified Anurid got him dangerously low on life. The Aphetto Vulture ended up not mattering at all as Jens had two Profane Prayers to first get it out of the way and then finish off Mats to win the first game. 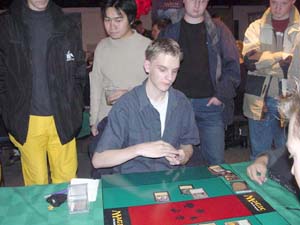 Jens thought a long time about keeping his hand frowning to himself all the way. In the end he decided to keep an all swamp hand, drawing first. His hand seemed fine as a Headhunter came down on turn 2 and a Swat on a morph creature forced Mats to discard to the little creature. Both players then made some Gray Ogres, some facedown some face up and they started racing.