Round 13: Jens Thoren vs. Mattias Jorstedt 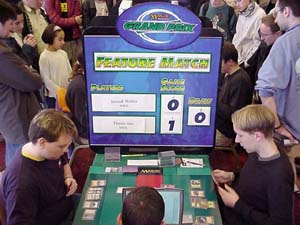 Remember Team Punisher placing two team members in the Top 8 (Walamies and Anton Jonsson) at New Orleans? Well, Thoren and Jorstedt also belong to Team Punisher and whoever wins this round gets to play the last round to make the Top 8. So it's Swede against Swede, Punisher against Punisher and above all, friend against friend.

Mattias dropped a Druid Lyrist and a Cartographer while Thoren played two Patrol Hound and a Mystic Visionary.

The Cartographer took down the Visionary but Jens replaced it with an Aven Windreader. With his back against the wall Jorstedt dropped a blocker and hope for the best. An Aether Burst later he was conceding a game played in less than three minutes.

Mattias: "That was not the game I was imagining."

They don't call him Broken Thoren for nothing.

The shuffling took more time than the first game and after some sideboarding they were on their way. Jorstedt had to take a mulligan and took the time to explain something he noticed during Game 1:

Mattias: "Jens is way too good for me."

He opened up with a Spark Mage that soon had a Seton's Desire while Thoren played a Patrol Hound and used an Aether Burst to bounce the Mage killing the Desire.

The Mage came back with a Wild Mongrel and Springing Tiger but Thoren again upped the ante with a Dreamwinder, Aven Fisher and an Aven Windreader. The Tiger was blocked by the Dreamwinder but a Refresh saved it.

While his creatures were smaller Jorstedt had an ace up his Swede sleeve: Overrun. Jens leaned over the table, made the math and blocked the Spark Mage (losing Fisher and Hound) instead of dropping all the way down to one.

Now at five he had to be extra careful. He attacked with the Windreader and chumped the Tiger with an Aven Cloudchaser. When Jorstedt tried to pump his Mongrel Thoren bounced it with an Aether Burst.

Jorstedt dropped a Rabid Elephant and attacked while the two flyers brought him down to seven. When Thoren was forced to use his Embolden to stay alive on the next turn Mattias finally had the opening to kill his friend with a Flame Burst.

A few more sideboard retouches, and a lengthy shuffle, in silence as always, prepared them for the decisive game. They could take their own sweet time with forty minutes still remaining in the round and their two very fast games so far.

The Spark Mage and the Patrol Hound again made early appearances and Mattias used a Rites of Spring to thin three lands out of his deck but could not suppress a sigh when Thoren brought in his second Patrol and the Mystic Visionary. The Mage took down the Visionary and Mattias finally stopped the Hound party with a Krosan Archer, Druid Lyrist, Wild Mongrel and a Halberdier. Faced with a growing army Thoren started using his Looter to find some extra land (he was still stuck at three).

Jorstedt sent in the Mongrel and used a Muscle Burst to bring down both blocking Hounds, or he would have if Thoren didn't have his Embolden. So the two Hounds survived and were soon joined by a third.

Jens finally found his fourth land and could now unload his hand. He played out a Dreamwinder, totally locking up the floor. The problem was he had to tap out to do that and Mattias got the chance he had been waiting for: Overrun! He sent in at least twenty points of creature damage, with cards in hand to pump up his Mongrel.

Logically Thoren took his time to come up with the blockers losing two Hounds and a Dreamwinder. Jorstedt discarded three lands to bring Thoren all the way down to two.

Thoren conceded his possibilities and held back in defense but all Mattias needed was a draw phase: up came a Volcanic Spray and the game and match was over. Call it the round that Overrun won. Mattias gets to fight for the Top 8 on the next round while Jens is relegated to fighting for the best money, and Pro Tour points, finish.