Round 13: Jon Finkel vs. Gab Tsang 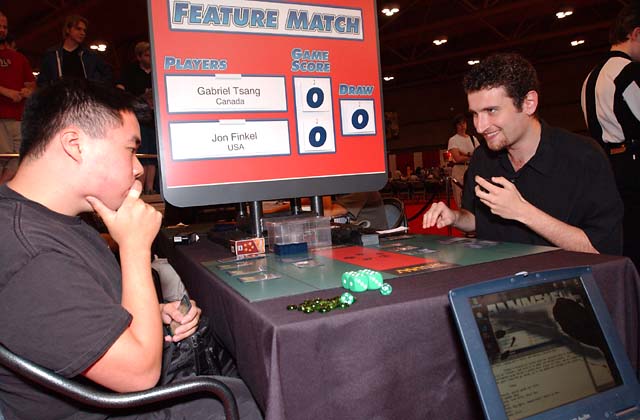 The final day of the Swiss got off to a roaring start with a revenge match from yesterday's first draft. Yesterday, the Canadian Ghost of Magic Past Gab Tsang got the better of Magic's Poster Boy, Jon Finkel, with the oft-maligned Death Bomb dealing the killing blow. Now they had to fight in the recently muddied waters of Extended.

Finkel played an island and passed the turn, trying to guess at Tsang's deck. Was it Sligh, Stompy, White Weenie? Tsang remained stoic as always, laying out a forest and making a Ghazban Ogre.

Finkel's diabolical master plan was unfurled when he dropped City of Traitors, and used it to power out Veiled Serpent. The outrageous play forced a wicked smile across his face, and he laughed as he gave Tsang the go ahead, as if the match was already in his pocket.

Tsang dropped Briar Shield, and pitched an Elvish Spirit Guide for a Llanowar Elite. Finkel went back to his stockpile for a pair of Powder Kegs. Tsang's men swarmed again and he lost the Elite to the Serpent. He summoned his best weapon: River Boa.

Finkel's Kegs grew, and he exploded one on the Ogre, Counterspelling a Briar Shield attempt. Tsang's snake kept on trucking, and another Elite leapt into play. Finkel's Masticore stepped in to put on the kibosh.

The relentless Boa snuck past the mobile machinegun, dropping Finkel to six. Finkel tried to get Tsang's hopes up by reaching for his library, but smiled and pitched Force Spike. He shot the Elite and attacked. Tsang came in again, bringing The Machine to four. He thought hard, and added an Elvish Lyrist to his team. Finkel dispatched it at end of turn. 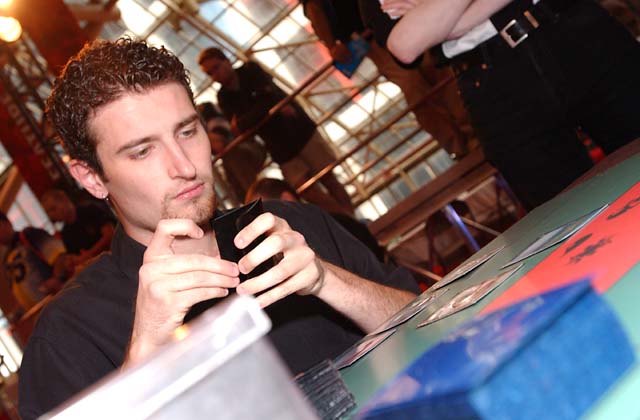 The match was joined by Magic Debutante Chris Pikula, who did a double-take at the Veiled Serpent in play. The Meddling Mage was taken aback. "Main deck? Whose idea was that? I want to know who's to blame!" Finkel put on a sly grin and said "It's called Baby Bluey."

Tsang fell to twelve as Finkel turned up his second Keg. He made a Rogue Elephant, and lost the Boa to the Masticore-Keg connection. When Finkel's board didn't develop, Tsang went for Rancor on the Elephant only to watch in horror as Finkel displayed a Rushing River. However, Finkel was now 'Core-locked, and Tsang dropped two more Elephants.

Finkel pitched his last card and drew for the turn. He wasted no time in reducing Tsang to four life. Tsang's play was also immediate. He swung with both Elephants and played Giant Growth on the unblocked one. Finkel showed that he had drawn Counterspell. Tsang scooped, and Finkel's face broke with amazement.

"You know you shouldn't scoop there. The 'Core was going away on my upkeep," he said. And immediately Tsang saw it. His resolve fell, and he let out a nervous laugh. "Wow, that was bad. Is that the 'Finkel Win' they're always talking about? I can't believe I just gave away game 1. I guess I just have to Vienneau this one."

Finkel mulliganed just for fairness's sake. Tsang led with the Ogre again. Finkel played island and passed back. Tsang's Quirion Ranger resolved, and bounced a forest to hand to give him more mana. He tried for a Rancor on the Ogre, and in a rare moment, Finkel lost his composure as the Submerge practically jumped out of his hand to quell the beats. Tsang made a free Rushwood Legate.

Finkel played a second island. He sucked up three from Tsang's army and let the Ogre re-enter play. His troubles became abundantly clear when he passed the turn without developing his board. A second Submerge further delayed the Ogre, but two Llanowar Elite entered play. Tsang's Legate met Force of Will.

It was no matter at all. With a throng of four 1/1's knocking at his door each turn, Finkel packed up his cards in short order. 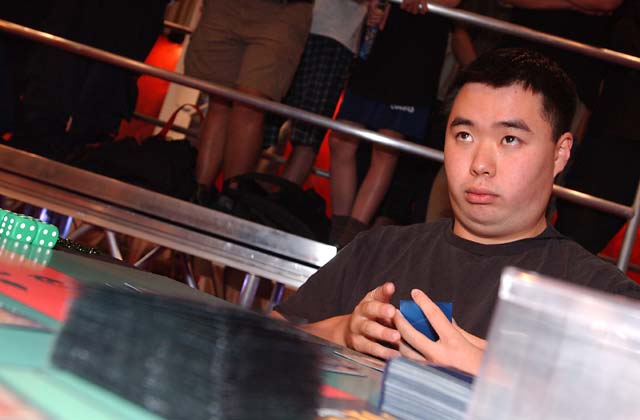 Tsang was slow off the mark in game three, forced to Spirit Guide out a River Boa on his first turn. Finkel let it happen, then Submerged when Tsang tried for a Briar Shield. He further frustrated his game by Boomeranging his Rogue Elephant. He added a Veiled Serpent to his defense.

From there, things went south quickly for the Canadian folk hero. Finkel dropped Ophidian. Tsang risked it all on double-Elephant. Finkel busted back-to-back Submerges. The crowd winced audibly. After that, it wasn't even a game. Finkel played Thieving Magpie and went to town. Tsang scooped, this time with just cause.

Afterwards, at least one Canadian was heard to say that watching Tsang throw away the first game, and ultimately the match, was "...like watching someone take a leak on Santa Claus."