Round 13: Katsuhiro Mori vs. Osamu Fujita 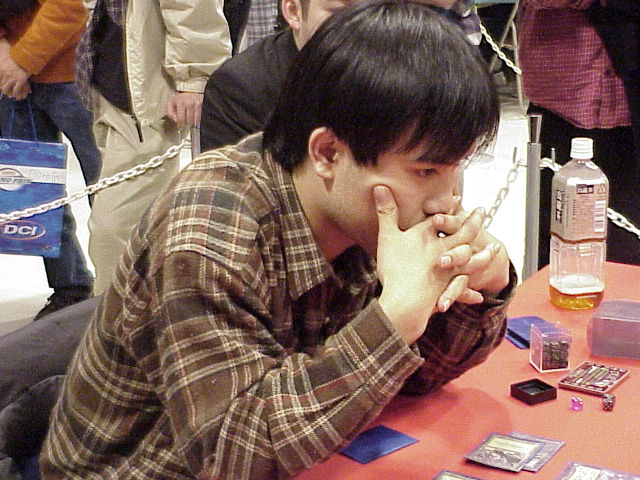 Katsuhiro Mori is among the elite who have a title with "Of the Year" in it and is often referred to as "Roy". He recently placed 9th at Worlds. In addition, he's a key player in Japanese powerhouse Team ANCHANS. But facing him on the other side of the table is his fellow ANCHANS teammate and Limited specialist, Osamu Fujita. While his solo outings have fared poorly since coming in second at 1998 APACs, he knows Fujita inside and out. So don't count him out yet.

Mori's paper was rice-thin, but yet it managed to envelop Fujita's rock, and the Rookie of the Year chose to go first. Living up to his reputation, he mulled over his zero-land hand for a picosecond before mulliganing. Fujita's game auspiciously started with a turn one Bird of Paradise, and a turn 2 Wall of Roots joined by Treetop Village.

A Fujita Duress started the battle over the hand. Mori gave him 2 for 1 card advantage by meeting it with Force of Will and removing an Illusions of Grandeur. Fujita then took charge of the game by dropping a Pernicious Deed. The crowd gasped at this stroke. Mori's primary kill mechanism, Donating the Illusions of Grandeur, was going to be quite the challenge to pull off.

But showing the fighting spirit that made him Rookie of the Year, Mori refused to give up. Hope springs eternal in his breast. He Intuitioned for 3 Accumulated Knowledges, then tapped out and dropped a Morphling. Fujita took advantage of this lull by throwing down a Spike Feeder. That would guarantee that he'd hit 24 life, requiring Fujita to combo once AND play two Fires to the head.

Did that slow down Mori? Of course not! He untapped, and drew a Counterspell. He attacked a flying Morphling, who was blocked by the Bird of Paradise. Fujita would have none of this Morphling in play nonsense, and attacked with the Feeder and gained 4 life. He then sacrificed the Pernicious Deed for 5, cleaning off the board with nothing more than 2 Treetop Villages, 3 Forests, and a Swamp in play. Fujita's plan for sudden beats seemed foolproof.

Mori sat back and countered a Yavimaya Elder, then accessed the 3 strength Accumulated Knowledge. He started to consolidate his risky position by playing a Sapphire Medallion and Phyrexian Furnace. Meanwhile, Fujita's Treetop Villages were springing into action and knocking Mori lower and lower, until Mori was at 7. Mori had a Fact or Fiction in hand, but was unable to use it since he had to keep Capsizing Fujita's rampaging Villages. Fujita still possessed the advantage, but the future remained unwritten.

A lucky topdeck, a second Sapphire Medallion, hit play, and Mori could now hold off both Treetop Villages at the price of tapping out. Fujita tried an additional Pernicious Deed, but it was countered by a 3 mana cost Force of Will. Unfortunately for Mori, Fujita topdecked his third Pernicious Deed. Mori sacrificed his Phyrexian Furnace, and pulled .. a Force of Will! Donate was sent to the graveyard to put him at 3. And then Mori finally grasped control of the game at 4 life by playing a third Sapphire Medallion.

He Fired away a Bird of Paradise and Yavimaya Elder Fujita had sent through, and Capsized both Treetop Villages. Fujita topdecked another Spike Feeder and tried to get it through, but Mori had the Counterspell.
Mori continued to drop land and land and land, and finally managed to clear off Fujita's board through Capsize lock. With a clean board, Mori finally got the chance to Donate Illusions of Grandeur, and Fujita conceded, since he needed every minute to win games 2 and 3.

While sideboarding in between games, Fujita quipped (loosely translated) "Three medallions and Capsize are some good, I hear". Mori grinned and laughed. 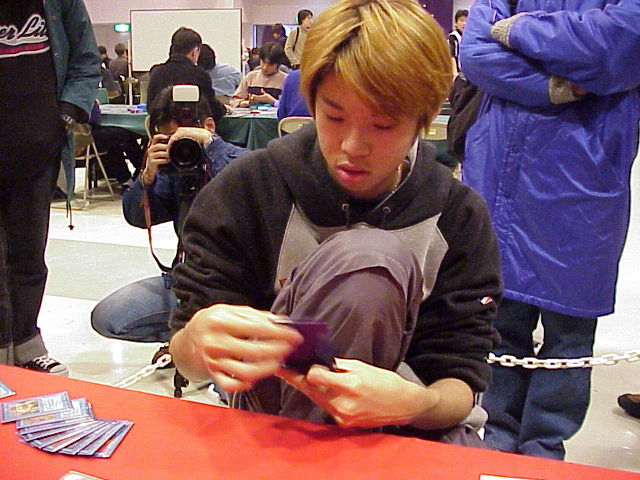 After the dynamic give and take of the first game, the second game was quite refreshing.

The action started as Fujita Duressed on turn 2, prompting Mori to Brainstorm and see what he could stash away. Force of Will and Illusions of Grandeur got put on the top, and Fujita got to see 2 Fire/Ices, a Back to Basics, a Volcanic Island, and 2 islands. Having a Dust Bowl in play, Fujita opted for the Back to Basics. A Yavimaya Elder allied himself with Fujita. Mori then dropped down a Sapphire Medallion. Fujita then followed with a Pernicious Deed, which Mori allowed. It was anyone's ballgame.

Fujita's acquisition form for recruiting Phyrexian Negator got stamped "REJECTED" by the previously preserved Force of Will. Fujita kept swinging with the Yavimaya Elder and dropped a second Elder, which made it through. Mori's Fire cleared away the attackers, though it netted his opponent FIVE cards. He then played Intuition to put the power of Accumulated Knowledge in his hand. A second Accumulated Knowledge gave him the Donate he needed, and Illusions of Grandeur suddenly found itself on the wrong side of the board. Fujita could have paid the upkeep for 4 turns, but Mori nipped the game in the bud with a Merchant Scroll for Capsize.