Round 13: Katsuhiro Mori vs. Reiji Ando 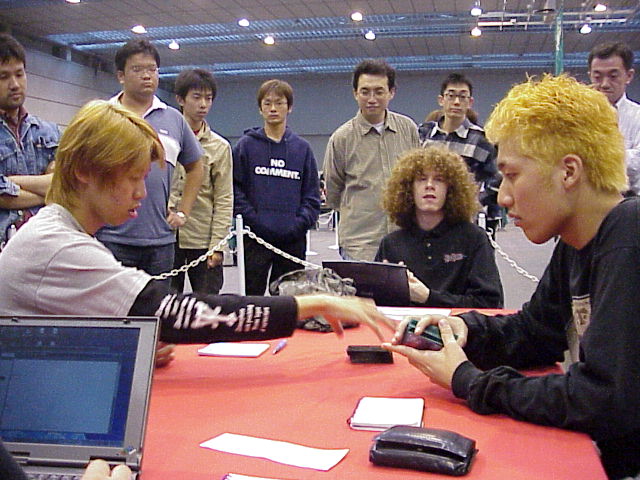 Round 13 was the Battle of the Blondes, as Reiji Ando squared off against Katsuhiro Mori. Mori is the newly-crowned Rookie of the Year whose play is so fast it happens in the gaps between moments. Ando Reiji is a workhorse looking for a title. Both are sporting shocking dye jobs.

Mori's red-black deck gave him no early plays. He had a Firebolt for Ando's Seton, Krosan Protector, but his offense was just Diseased Vermin. Ando made a Nantuko Mentor, expecting to lose it to the Vermin, but Mori was content to wait, returning Firebolt with Anarchist. Firebolt did the job, while Ando stopped the Anarchist with Ghastly Demise. Mori made Cephalid Scout.

Ando had no play, holding Moment's Peace and Seton's Desire. Mori knocked him to ten. He finally found a Springing Tiger, stopping Mori's beatdown. Next turn he suited it up with the Desire and swung. Mori returned the favor. Ando found Beast Attack waiting for him, and his spirits rose, but Mori had Syncopate to eliminate the threat. Aether Burst stopped the Tiger cold. 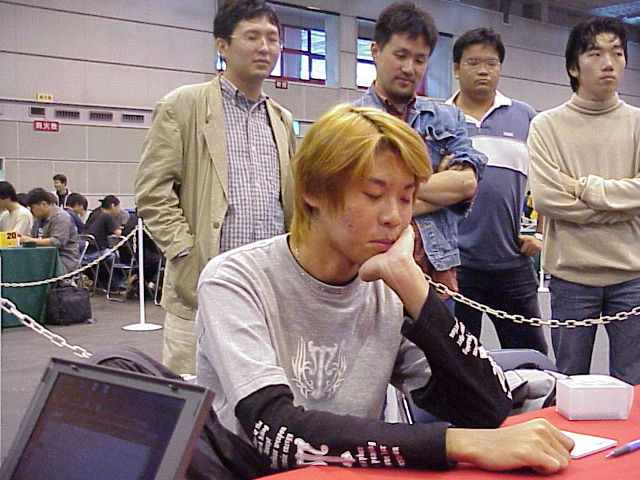 Ando's back was against the wall. Moment's Peace twice bought him time, and he tried to hide behind his Tiger, but Mori had Dirty Wererat and threshold. Aether burst made sure that it was over.

Ando got game two off on the right foot, finding all three of his colors. Mori, however, was not so lucky. His whole play was two islands and Cephalid Scout. Fortunately, he had a Syncopate for Metamorphic Wurm.

With that, he fortune seemed to change. Ando had no threats in hand, just Hallowed Healer, while Mori had land and Kingfisher. Mori kept up the aerial assault with Foul Imp. Ando's offence was a sluggish Pilgrim of Virtue.

A flurry of instants broke out over Mori's Execute on the Healer. Ando tried Shelter, Mori responded with Ghastly Demise, Ando made the save with Refresh. Lucky for Mori he had Aether Burst back, or he would have been buried under that card advantage. 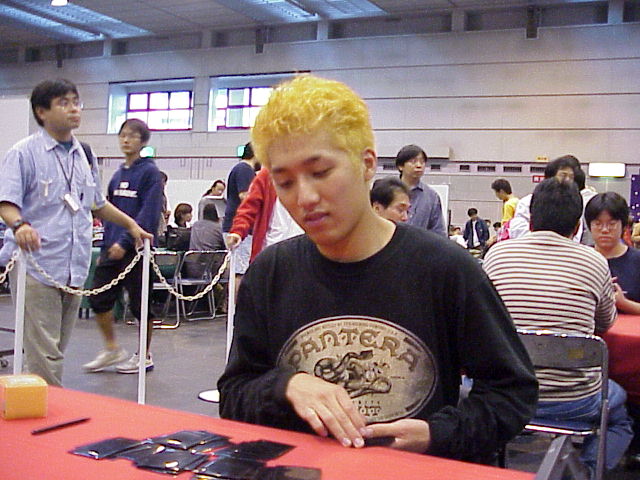 Mori brought out Scrivner to try another Execute. Again Ando had Shelter, and this time Mori couldn't foil him. Still Ando had no threats. He played Morbid Hunger on the Scout, worried about losing in the long run. Face of Fear finally showed up for Ando, and he started the beatdown.

While Ando was getting his groove on, Mori struggled to keep up his board position. Ando had another Hunger to keep his airforce in check. Finally Mori drew Morgue Theft, recurring his Scrivner and with it Execute. The cavalcade of card advantage continued with Anarchist for Morgue Theft for Aven Fisher.

Now Ando's only hope was to swing with the Face and hope his Hungers could pay the bills. Unfortunately, Mori's card advantage tripled the Aven Fisher population, and he found Persuasion for the Face. To make matters worse, Mori started playing Morbid Hungers of his own. Facing an insurmountable horde, Ando conceded.