Round 13: Kazuya Mikawa vs. Akira Asahara 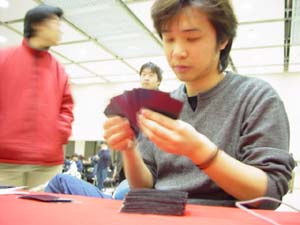 Akira Asahara is respected both as a player and as one of the masters of Japanese constructed Magic. His decks are always the hottest things around. Today his choice is a little more pedestrian: Tinker. Asahara squares off against hometown hero Kazuya Mikawa, resplendent in his flaming red leather jumpsuit. Mikawa is with blue-green madness.

Asahara's draw was sluggish, with just a pair of islands and Voltaic Key to start things off. When he missed his third land drop, Mikawa's draw turned savage. He added a pair of Wild Mongrels to his Rootwalla and Merfolk Looter. Before Asahara would play a third land, Mikawa would Frantic Search into Roar of the Wurm.

Asahara drew island number three. He ignored the Tinker in his hand, going instead for the Metalworker. This meant that Mikawa was free to Intuition for Wonder, discard his hand to the Mongrel, and pump his Rootwalla for exactly lethal damage.

Asahara mulliganed for the second game, then started with Ancient Tomb, Grim Monolith, and then a Stroke of Genius for three on his second turn. Mikawa had just a Merfolk Looter on the table, so the coast was clear for Asahara. He had Tinker at the ready, but no convenient mana. He made another Monolith and passed it back, locking down Mikawa's green mana with is Port.

Mikawa played Careful Study, ditching Roar of the Wurm and Deep Analysis, playing an island before turning it back over to Asahara. He added and island, and risked nothing further. Mikawa Looted up a Basking Rootwalla at end of turn, then untapped and dropped Spellbane Centaur. Asahara took the opportunity of his tapping out to play a Stroke of Genius for four.

Now he was back in control. He powered out Voltaic Key, Thran Dynamo and then Tinkered up Masticore, shooting down the Looter and adding Seal of Removal to his side. Mikawa tried Gilded Drake, and Asahara let it happen. He threw the Drake in front of the incoming Rootwalla, and Mikawa was kind enough to tap out and trade.

The door was open. Asahara tapped all his artifacts and lands and played Upheaval. While he worried about maximizing the mana he got from replaying his artifacts, Mikawa was scooping. 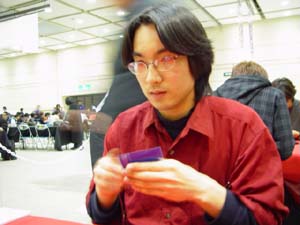 Mikawa took some beats, then escaped for one turn with Frantic Search. All he could muster was an Arrogant Wurm. Asahara had enough mana to assassinate it. He hit again and added another Wire, 'Core-locking himself. Mikawa had a Naturalize to get rid of it on his next upkeep, but Asahara was free to hit again, bringing him to one. Without a Wonder in his graveyard, Gilded Drake was no solution. Roar of the Wurm provided a speedbump. Then he passed a turn with seven mana open. Asahara swung, and Mikawa bounced the Masticore with Rushing River. He had Circular Logic to stop it for good.

All Asahara had left was Smokestack. They entered the extra turns. Asahara's fifteen life was too much for Mikawa to overcome.

2 Careful Study 2 Roar of the Wurm