itting down to the first round of Day 3 competition we have reigning team champions Tomohiro Kaji and Tomoharu Saito defending their title. You'll recall they won Pro Tour-Charleston last year alongside Shota Yasooka, though in a Constructed format instead of Limited. Sitting across from them are 2006 Rookie of the Year Sebastian Thaler and teammate Florian Pils. The two German players live in close proximity to one another and while they haven't been playing Two-Headed Giant together for very long (this is the inaugural season, after all), both said they've been playing together for quite some time. 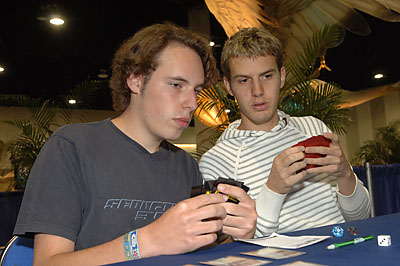 Florian Pils and Sebastian Thaler play with the prospect of a shot at the Top 4 looming over them just as surely as the hall's replica of Serra Angel.

The Japanese players won the die roll and opened with a mulligan for Saito, though Kaji was content with his opening seven. A second shot at a full hand for Tomoharu was good, while the Europeans were content with their first hands.

The opening "play" from the two teams was a Shade of Trokair suspension from Pils after Kaji/Saito passed the first turn. Thaler and Kaji both quickly revealed themselves to be playing blue-red while their respective teammates represented white-green and black-green. A Gossamer Phantasm from Kaji met its end at the hands of Thaler's Piracy Charm while Thaler's Essence Warden was KOed by Saito's Cradle to Grave. At the end of the first few turns, Thaler and Pils had a Wormwood Dryad, a morph, and Shade of Trokair on one suspend counter. Their opponents also had a morph in addition to an unkickered Citanul Woodreaders and a slight lead on lands.

The Japanese players discussed possible plays for their turn, and a quick look at their hands revealed what they're discussing: play a Midnight Charm on the Wormwood Dryad, or leave it on the board to maximize Saito's as-of-yet-unplayed Magus of the Abyss? Making things more complex was the fact that Saito didn't have the fourth land to play the creature, though his teammate had plenty, with three of them in hand supplementing a Riddle of Lightning. They opted to attack with their morph, representing anything from Spellshaper Parasite to Gathan Raiders, and Thaler/Pils opted to take 2. Post-combat Saito convoked a Kavu Primarch into play from his three lands and Citanul Woodreaders, going for a third play rather than killing the Wormwood Dryad.

Thaler and Pils had plenty of options on their turn. With the Shade of Trokair finally entering play, they spent their first main phase determining the correct course of combat action. Eventually they sent the Shade and the Wormwood Dryad, the latter being blocked by Primarch. After pumping their Shade twice, the European players stacked damage and played Whitemane Lion to save their 3/1. The Japanese players paused to consider possible responses but ultimately shrugged and binned their Kavu Primarch. A post-combat Aven Augur from Thaler met a hasty end at the hands of Kaji's morph: Shaper Parasite. At the end of the turn, the score was 28-27 in favor of the Europeans.

As the teams headed into the mid-game, the board position looked to be favoring the Thaler and Pils. They had added a second Wormwood Dryad to their team as well as a Fomori Nomad leaving them with the Dryad, Nomad, Whitemane Lion, Shade of Trokair, and a morph. They also had gained the lead in lands, but Saito had managed to Search for Tomorrows up the fourth land he needed for a potential Magus of the Abyss. His team's board stood at a lonely Shaper Parasite and Citanul Woodreaders, but when he finally untapped with four lands the Magus got to come into play.

The card earned a read from both Pils and Thaler. During their upkeep they whispered over the best way to resolve its trigger, carefully deciding which creatures they would be content to play without. Eventually they settled on Fomori Nomad and Whitemane Lion.

Moving into their main phase, Sebastian revealed his morph to be a Maelstrom Djinn, which got in for 5, dropping the Japanese players to 19. The Djinn, normally a fattie with a drawback, was a slightly more solid creature in this circumstance as its normally major vanishing drawback wasn't quite so bad facing Magus of the Abyss.

The Japanese players resolved their Abyss trigger during their upkeep, opting to bin Shaper Parasite and Citanul Woodreaders. They discussed possible plays, then shipped the turn without making any. By not playing any creatures they doomed their Magus to a suicidal death, but not before it had cleared their opponent's board of threats.

The Europeans were not intimidated. On their turn they didn't shy away from playing three creatures onto their otherwise vacant board: a morph each for Thaler and Pils and an additional Amrou Seekers for Pils. After they shipped, the board stood at morph, morph, Seekers for Thaler/Pils and a soon-to-be-dead Magus of the Abyss for Kaji/Saito. 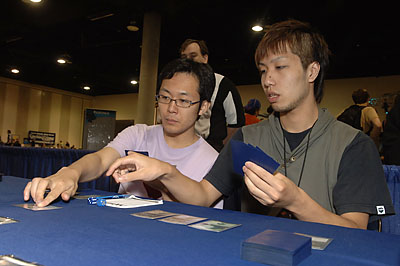 Tomohiro Kaji and Tomoharu Saito try to keep their opponent's on edge.

After sacrificing the Magus, Kaji used his team's turn to play a Djinn of their own, this time of the Stormcloud variety. Saito meanwhile had a Viscid Lemure, but he recognized that he and his teammate were clearly fighting an uphill battle for tempo.

A technical glitch in the midst of setting up for the Top 4 webcast caused the lights in the Feature Match area to dim, and while there was sufficient ambient light to function, Saito asked if they could pause the match until the problem was resolved. Table Judge Ingrid Lind-Jahn moved to check with Head Judge Toby Elliot who verified that the players could pause and receive a time extension.

The game stood at 28-15 in favor of Thaler/Pils, who were starting to feel the Japanese players take control. While the Europeans had the lead in creatures with a morph, Ashcoat Bear, and Amrou Seekers (with a Veiling Oddity suspended on four counters), they had just watched a series of blocks from the Japanese players allow a flurry of Charms, Midnight and Piracy, trade for Infiltrator il-Vec and a hellbent Gathan Raiders.

After a few minutes in darkness, Head Judge Toby Elliot returned to declare that the Feature Match table would be moved entirely to an area not affected by the lighting glitch. Thaler expressed concern that it would be difficult to pick up all the cards and move them, but the judge clairified:

Elliot: "We're picking up the entire table and moving it."

Caught off guard by the odd turn of events, the players could do nothing but laugh nervously with one another before following their game to the new Feature Match area. Before sitting down, Saito gave himself a trademark slap to the face in order to focus, and the foursome resumed their play with a healthy time extension.

A Deadwood Treefolk from Saito returned his Magus of the Abyss, and he and his teammate looked to further take control of the game…

…but Thaler and Pils were not going down without a fight. Pils added a Serra Avenger to the board, then attacked for 2 with Amrou Seekers. Thaler played a post-combat Coal Stoker, and the possibility for a very large storm spell loomed large. That wasn't the play, however, though Thaler had something arguably worse: Pyrohemia. Because of how the 2HG rules work, Pyrohemia effectively does 2 damage to each team every time it is activated, because it stings each head for 1 (though it still only hits creatures for single point increments). With the Europeans solidly ahead in life, this could prove absolutely devastating for the Japanese players who could easily lose all remnants of control simply by dying to shots from the timeshifted Pestilence. Fortunately for them, Thaler had only two Mountains in play.

After receiving the turn back, Saito could only replay his Magus of the Abyss and attack with Deadwood Treefolk, while Kaji continued to sit back in the role of the control player. It didn't help that Kaji still had two lands in hand with a Pact of the Titan, and his team was stuck sneaking in as much damage as possible to cut their opponent's lead down, helping to nullify the Pyrohemia. The Magus, if it could survive, threatened to destroy the problematic enchantment by virtue of removing all other creatures from the board, but it would have to make it through a few tenuous turns, and their life totals would have to hold up in the interim. 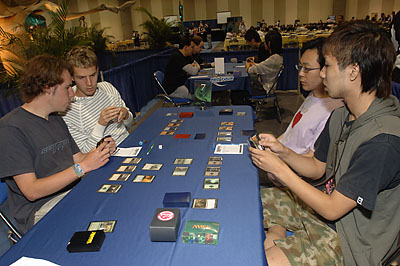 The two teams battle it out in the improvised Feature Match area.

Thaler and Pils managed an attack on their turn with their two evasion creatures, Serra Avenger and Amrou Seekers. Thaler's land drop was an Island, a small bit of relief for Kaji/Saito, whose life total was on a precarious 8 after the attack. The Europeans passed.

During his upkeep Saito decided to kill his Deadwood Treefolk with the Magus trigger, using the 3/6's leaves-play trigger to pick up a Citanul Woodreaders, finally capable of being kicked and drawing two cards for the beleaguered duo. At the end of their turn, the teams took 2 damage each as Thaler activated his Pyrohemia once. The Japanese players dropped to 6, staring down two Mountains and an Amrou Seekers.

During their upkeep, Thaler and Pils binned a creature apiece for the Magus trigger, Thaler losing his Coal Stoker while Pils sacced an Ashcoat Bear. Not satisfied with just killing two creatures, Saito opted to Death Rattle the Serra Avenger as well before the two players were able to draw a possible trick to save it.

This was it. If Thaler managed to draw a Mountain it was over. He drew…

But wait! The two Euros still had a Veiling Oddity on one counter, low enough for the Fury Charm to bring it in and make all of the Europeans' creatures unblockable for the turn. Revealing the trick and indicating their intent, Thaler and Pils graciously accepted a hand shake from the Japanese duo, walking away from the table with a win without having to abuse their Pyrohemia excessively.

After the match, Saito pointed to his nametag, which read "Rogier Maaten." Explaining, he said:

While Thaler's Charm proved more potent, Saito and his teammate are still in solid shape to finish well into the money. Meanwhile, Sebastian and Florian are contenders for the Top 4 with a win in the following round.