Round 13: Mark Herberholz vs. Adam Horvath 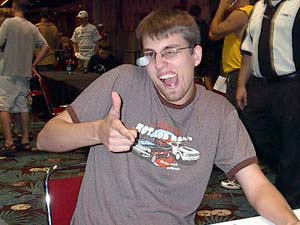 Just before this round, Herberholz walked up to me and said, "More Mantle Affinity decks in the feature matches, please. There are still three of us in contention for the top 8, you know." Well, when we saw the elimination match between these two player who were seemingly separated at birth, Mark got his wish.

Herberholz is a currently college student attending Michigan State who played in his first Pro Tour top 8 in May at PT: San Diego, and also made the top 8 at last year's Block GP in Detroit. Adam Horvath is a Team TOGIT pro, who looks like the older, more reserved brother of Marc, even though there is no relation between the two. Both players are running Affinity decks today, with Herberholz sporting his favored Paradise Mantle variety, while Horvath is running Frank Karsten's Vial Affinity deck with a green sideboard, which would prove crucial for Adam in game 2, wrecking Mark's chances of casting Furnace Dragon to even the game count.

Game 1 featured the usual battle between Cranial Plating on Heberholz's side and the Ravager/Disciple of the Vault combo for Horvath. Mark's two Somber Hoverguards pushed through heavy damage, but Horvath and his nine artifacts plus a Disciple and two unblocked creatures ended Herberheezy's life from seventeen.

"If you play turn 3 Furnace Dragon on me like Brock did, I'm going to vomit all over the table," complained Adam, who had just lost to Brock Parker in an identical matchup to this one.

While shuffling up, the two players discussed the merits of Paradise Mantle versus Aether Vial, with Horvath calling Mantle "terrible," while Herberholz countered that Adam must be a bad Magic player for dismissing the card so quickly. One might say they fought like brothers, but I don't want to get beat up by two skinny guys at Worlds, so I'll just say they had a polite disagreement about card evaluation and be done with it.

Game 2 started well for Herberholz, but Horvath's sideboard kicked into gear and Viridian Shaman plus Ozidize decimated Marc's board. To make matters worse, all Herberholz's deck was giving him was land, frustrating him, as he could see his chances at another GP top 8 slipping away. A few more swings from Horvath's team plus residual damage from every trade due to Horvath's Disciple of the Vault resulted in a Horvath win, and Herberholz being eliminated from the top 8. 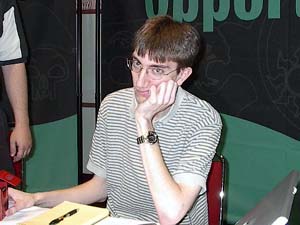 Herberholz: "The Dragon plan in our sideboard is probably the best plan for the mirror, but if I had to change things, I'd probably get rid of the Annuls and use two Shatters instead."

Horvath: "Dragon is probably better for the mirror, but having direct artifact removal is a bit more versatile and it helps out against the Dragon plan both from Affinity decks and against Big Red decks"