Round 13: Masaya Mori vs. Alan Comer 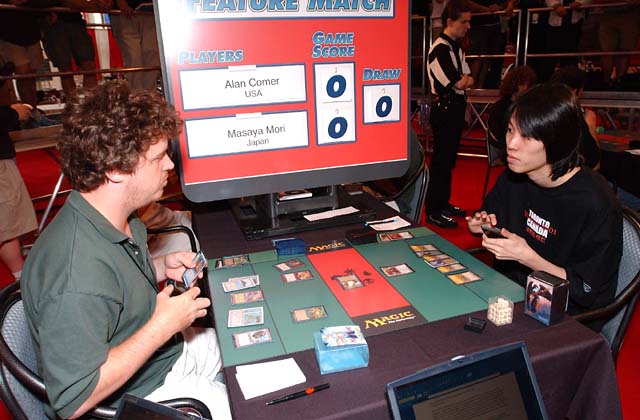 Alan Comer is one of the mad geniuses of Magic, and a member of Team Godzilla. After some argument with Zvi over the purpose of some of the cards in the deck, Alan stalked off for the Extended portion with his custom-modified Turbo-Land deck, while Masaya was playing one of the many 'audible' decks, White Weenie with Meddling Mages. Alan won the die roll and chose to play first, and both players wished each other good luck, with Alan asking how to say "good luck" in Japanese, and learning a new word in the language. Both players kept their hand, and Alan started with a Volcanic Island, to which Masaya played a plains and Mother of Runes. A second Volcanic Island from Alan came down, and the Mother attacked, then Masaya played another plains and a Seal of Cleansing, which Alan counters. Alan played a Tropical Island and Oath of Druids, and Masaya attacked with Mother again, then played Adarkar Wastes and a Disenchant on the Oath. Force of Will countered the Disenchant at the cost of a Gush, and after turning over two Explorations and Horn of Greed, Alan turns over Spike Feeder. Alan then played Gaea's Blessing to shuffle in the Explorations and a Counterspell, drew his card, and passed the turn.

Masaya played another plains and ended his turn; Alan played Horn of Greed, then a Treetop Village, drawing a card. Masaya played Undiscovered Paradise and drew his card, but still was unable to deal with the threat of the Oath. Alan played a third Volcanic Island, drew his card, and played Scroll Rack. Masaya had another plains, drawing another card, but at end of turn Alan used the Rack, then attacked, Gushed for some fresh cards, played land for fresh cards, and took his first Time Warp. On his new turn he Impulsed, presumably looking for Exploration, then attacked with the Feeder. Masaya got to play his next turn, which many would consider to be a good thing, but he had no play on his turn, while Alan played an island and Exploration, then another island as his combo got fired up. Gaea's Blessing targeted Time Warp, Horn of Greed and Gaea's Blessing, then Alan passed the turn again. Masaya mana-burned for one off of his Undiscovered Paradise, to draw a fresh card, then used Armageddon. Alan countered with Thwart, hard-cast, and Masaya played Undiscovered Paradise, drawing a card, and a second Mother of Runes. Alan pitched Thwart at that one, and when Warrior en-Kor was then cast, Alan allowed it. 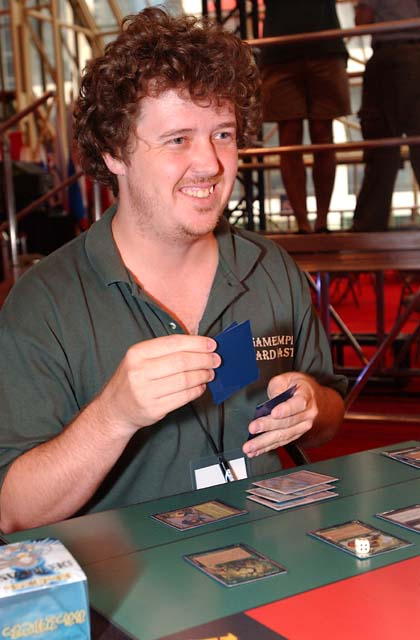 Alan played an island again, drawing a card, then a second Horn of Greed, followed by Tropical Island, drawing two more cards. Alan discarded an island and ended his turn. Masaya played a Tundra, drawing two cards, and when Empyrial Armor was cast on the Warrior en-Kor it looked like it would have been huge... but Alan countered it with a basic Counterspell. On the Warrior's attack, Alan blocked with his Feeder, and sacrificed it for the life, while the Mother protected the Warrior. A second Warrior en-Kor was cast and Alan allowed it, but Seal of Cleansing gave Alan pause, and he Gushed in response, and used Scroll Rack for eight. With his new eight cards, Alan used Force of Will on the Seal, removing Force of Will from the game. Alan then Oathed, removing eight lands off the top and putting them in the graveyard, then hit Crater Hellion, which the Warriors survived, but that was one pancaked Mother of Runes. With another Horn of Greed and some Lands, Alan cycled up, though he really wanted another Exploration sometime soon. Scroll Rack for eleven turned up an Exploration, and Alan was going to have to give Masaya another turn, but after that... there were no promises. Discarding five cards, Alan put some useless Oaths and Horns into the graveyard, and Masaya drew three cards off his next plains, then Alan considered Masaya's Paladin en-Vec. Counting his Lands, it resolved, and the Warriors attacked with impunity. Mother of Runes resolved, as did Soltari Monk, and having played nothing Alan cared about so far, it was Meddling Mage that Alan used Force of Will on, immediately getting Masaya's concession.

Both players sideboarded a bit for the next game; Alan seemed to be putting in two cards, while Masaya was reaching for a whole lot more of them. Alan added a Powder Keg and Spike Weaver, presumably taking out his Crater Hellion from the maindeck since it is mostly only needed against Stompy, and definitely will be below the average against Masaya's red-protected creatures. Masaya got to play first, and both players kept, with Masaya playing a plains to Alan's Island, and using Tithe to fetch a Tundra. Masaya played a second plains and Seal of Cleansing, to Alan's second island, and a third plains plus a Tundra from Masaya still had not turned up a creature. Alan dropped a third land, then a Horn of Greed plus a fourth land. Masaya played Armageddon, and Alan Gushed in response, and allowed it. Masaya followed that with a plains, and Alan had a Tropical Island plus Exploration, then discarded an Oath of Druids, island, and Spike Weaver. Masaya had a second plains but had to decide whether he should play a creature, and decided on Soltari Priest. Alan allowed it, and Masaya followed it up by Sealing the Exploration. Alan played an island and drew a card, then Impulsed, and discarded an island. Masaya had an Adarkar Wastes and tried Empyrial Armor on the Priest, with five cards in hand. Alan Thwarted, having no lands in play, then took damage from the Priest. Tropical Island was replayed, and Alan again had to discard, losing three islands. Masaya tried again, and this time Alan had Force of Will, and took the Priest's normal damage during the attack. Masaya had a Tundra with which to draw a new card, then examined Alan's graveyard. Masaya played Soul Warden, then passed the turn. Alan played Exploration, then drew a card for his fresh land, and finally appeared to be catching up from his previous Thwart.

Masaya attacked Alan down to twelve, then attacked and played Soltari Priest, but his attempt at a Meddling Mage failed thanks to Counterspell. Alan played at drawing some more cards, then had the same number of Lands in play, plus a Spike Weaver. Masaya attacked, and Alan Weaved, and a Disenchant on Exploration resolved. Masaya played a third Priest, and ended his turn. Alan cast Horn of Greed, then played an island and drew two cards, then discarded Gaea's Blessing. Three Priests attacked on the following turn, and again Spike Weaver stopped them, and Masaya Tithed for a basic plains and used it to draw two cards, then attempted an Armageddon, which Alan countered by Force of Will alone... at the cost of an Impulse. Alan untapped and played a land for two more cards, then used Gaea's Blessing on the Spike Weaver, Gush, and Gaea's Blessing in his graveyard. After attempting to play a second land, which was stopped with the reminder that Exploration was not in play, Alan played Oath of Druids instead. Masaya used Disenchant on the Oath, which again was hit with a Force of Will, and Masaya's attack led to the Spike Weaver's demise. Masaya passed the turn, and Alan's Oath of Druids passed Gaea's Blessing on the way to finding the second Spike Weaver. Masaya used Swords to Plowshares on the Weaver, and Alan played a land for two more cards, then finally his Exploration, and another land. Alan played Scroll Rack, and passed the turn. Masaya tried Empyrial Armor, and it resolved, then Masaya attacked Alan down to two life. Alan used Scroll Rack at the end of turn, turning in his old hand for whatever was on top, and placing the Spike Weaver where he wanted it. Oath turned over a Horn, Oath, and Taiga before revealing the Weaver, and Alan proceeded with the rest of his turn. 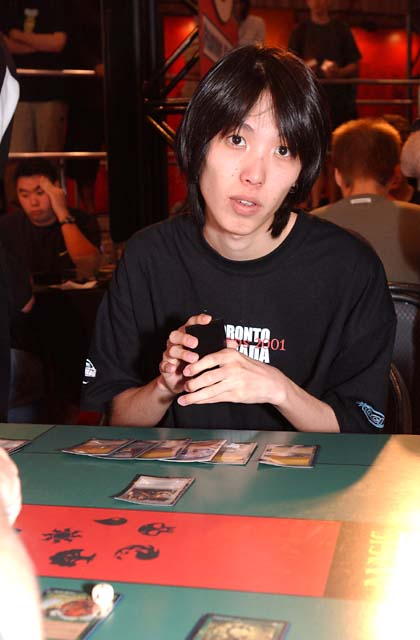 Alan played a Horn of Greed, followed by a land that drew him three cards, and another land, also good for three cards. Alan also played Powder Keg, then passed the turn. On Masaya's next attack the Weaver is activated, and Masaya played a land for three cards, then tried a Seal of Cleansing, Alan allowing it. Alan used the Rack for five at the end of turn, then untapped and put a counter on his Keg, and dry-Oathed, revealing that the creatures in his deck consisted of the two Spike Weavers. Alan continued 'going off' with two lands, then an Exploration and a third land, then another Exploration and another Land, followed up by a Gush and re-playing one of the lands he had just picked up. An Impulse kept digging, and found the fourth Exploration, followed by Alan's fifth land for the turn. Counting up what was vital to hold onto, Alan prepared a might deep Scroll Rack, dipping in for thirteen fresh cards. Spike Weaver then began the long job, attacking for two, and Alan... took another turn. Choosing his seven-card hand for his next turn and knowing what was on top of his library, he discarded a wad of lands plus an Oath of Druids and Thwart, after Masaya considered the wisdom of leaving the Seal of Cleansing where it was, and deciding that the Scroll Rack had done enough damage. On his next turn, Alan Oathed, shuffling his library and graveyard together, then drew for the turn, and started the nonsense all over again, with some lands while he controlled now four copies of Exploration and Horn of Greed. When Time Warp showed up, Mori conceded the game again, and thereby the match.