Round 13: Matt Vienneau vs. Chris Benafel 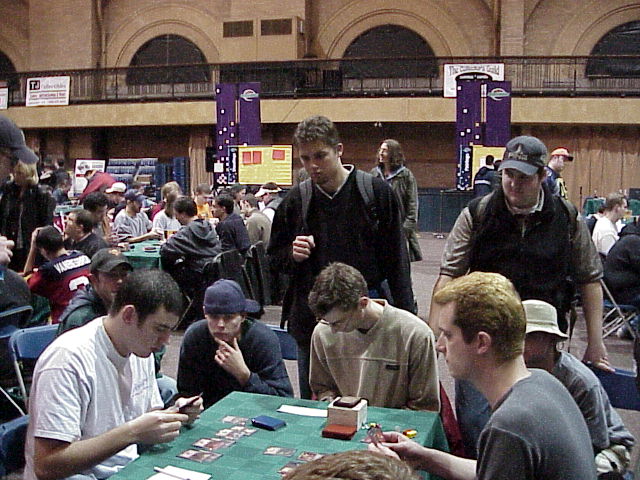 This was the third time these two had met, the last time being GP Dallas and those matches had both gone to Matt.

As the game started, Chris was confident about his victory, and Matt wasn't arguing. Both knew the quality of Chris's red/green deck, this just made Matt a little more nervous. There was an early vocal exchange between the two with Chris joking about mulliganing, but he kept. A Sparkcaster was his first play, shooting Matt for one before hightailing it back to the hand. He wasn't to impressed with his draw as it wasn't enough to match Matt's third turn Lava Zombie and fifth turn Pouncing Kavu. Chris attempted to stabilize with a Shivan Wurm but Matt has a Singe to change the color of Chris's only green creature, so the Wurm bounced. The slow gating draw by Chris was quickly overcome by Matt's attacking Kavu. Ironically, a Soul Burn finished the Game.

Matt asked if Chris now wanted to take a split, Chris replied "You know I'm gonna beat you, just liked I planned" Then Chris's confidence slipped as he decided to mulligan. While Matt was shuffling, Chris lowered himself to the table to get a better look. "What are you doing?" "Just making sure your not looking at my deck. You look away and I will" Chris got a laugh from the audience to pep himself up.

The game started with an early exchange of creatures, but then play halted as Chris considered his position carefully. The problem was Matt's creature quality as Chris was dependant on only two power monsters to defend himself after the trades. This was going a little too slow for Matt, who called for a judge to watch the game for slow play. So that got things moving again, with Chris looking to the top of his library for an answer. There lay only small monsters and land so the second dual ended quickly with Matt utilizing a Morning to eliminate multiple block options.