Round 13: Mattias Jorstedt vs. Daniel Zink 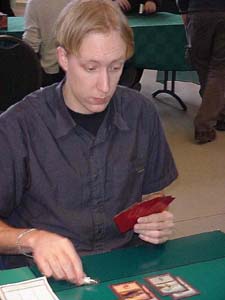 Mattias JorstedtDaniel Zink and Mathias Jorstedt have played each other twice already this tournament. Zink won both matches and is the only person to have beaten Jorstedt over the weekend. Now they are playing for a place in the top 8. Could the German Champion deny the Swede for a third time?

It didn't start well for Zink as he was forced to double mulligan. His green-red deck came out of the blocks on turn 2 with a Mad Dog but he had nothing to follow it with. Jorstedt didn't lay anything until turn 5, when he brought in a Frenetic Ogre.

Jorstedt chose to have Blazing Salvo deal five to the dome rather than kill his Ogre. A Reckless Charge on the Mad Dog was strong incentive to trade.

Zink finally found some more monsters, a Dwarven Strike Force and his own Frenetic Ogre. Violent Eruption took down one and then Scrivener brought about a repeat performance.

All the time Jorstedt was knocking Zink's life total down with a Phantom Whelp. Scrivener joined in as a volley of removal fried creatures on either side. At two life Zink ran out of removal as Jorstedt cast a Mad Dog.

Zink had a much better start in game 2 with successive Squirrels in the first two turns and a Barbarian Lunatic. It all went horribly wrong when Jorstedt cast Volcanic Spray and wiped out all his monsters

Burn just kept coming from Jorstedt's deck as Zink's little critters continually got crispy fried and all the while the Swede was hitting away with a Mad Dog. A Dreamwinder was on hand in case anything nasty came Jorstedt's way. 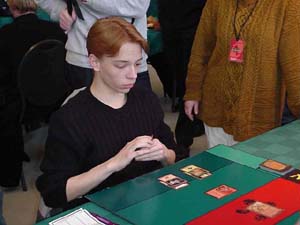 Daniel ZinkZink did fight back by summoning a Frenetic Ogre and slinging it in with Reckless Charge. Jorstedt could afford to take the five damage and then used a Violent Eruption to fish the Sylvan Might out of Zink's graveyard. The Ogre only won a temporary reprieve as a Fiery Temper send it the graveyard in flames.

"The spray was pretty good." – Jorstedt