Round 13: Midnight in the Garden of Good and Evil

'mon, Gerry! I wanna make Top 8 three times in a row. Don't crush my dreams like always," I heard Ant yelling as I hurried my way to the feature match area. I knew what I was getting into. This was one of the ultimate battles of good versus evil.
Antonino DeRosa.

Good man extraordinaire. Always great for a quote and a stellar performance.

Bottomless font of hate. Always great for a swift kick to a passing child. 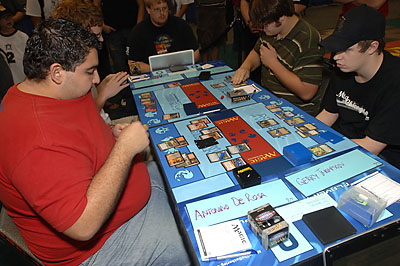 Antonino De Rosa and Gerry Thompson; not, perhaps, how you imagined the ultimate showdown of good and evil.

This was a match with everything on the line. Both player had to win and had worked very hard to get to where they are now. The stage was set for a no-holds-barred brawl.

"I really want to see your eyes. I don't know why, but I'm just terrible when I can't see my opponent. I never win a match on MODO, and I think that's why. It's not like I want to read you or anything," Ant said with a casual glance at Gerry's low sling hat.

"Yeah, good luck," Gerry shot back with a sly smile.

After Gerry mulliganed down to four cards, Ant tried to console him.

"I once lost to someone after they mulliganed to three. I mean, I went to four, but still."

"This is almost the same thing," Gerry deadpanned.

Ant started off lightning fast with a turn-one Scorched Rusalka and a turn-two Dark Confidant. He is bringing Rakdos 10 to the table, so there's always the chance he just gets faced for a million.

When Ant suspended a Greater Gargadon on the following turn, Gerry asked, "Just draw that one?"

Gerry dropped a Wall of Roots into play to stymie Ant's offense. Ant just upped the ante with an Epochrasite. Gerry dropped a Tarmogoyf onto his side of the board and played Edge of Autumn to fetch some more land out. Ant kept applying the pressure with another Epochrasite and a Mogg War Marshall. Gerry cycled an Edge of Autumn, considered his options, and then packed it in. 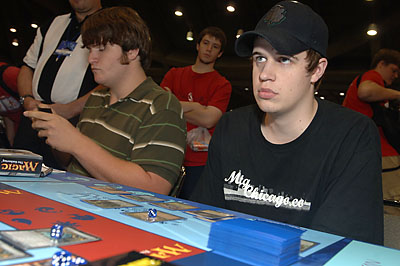 Thompson gives his opponent The Stare.

Between games, both players started sideboarding. Ant watched Gerry sideboard and chuckled as he let Gerry in on a little secret.

"When I was young and brash, I used to do the same thing you do."

"You know, sideboard in all my cards and then pull some out," Ant replied.

"Yeah. When I had to win to pay rent, I cared," Ant said with a playful grin.

"That's where I am now," Gerry informed him with a tight-lipped smile.

"Eww, sorry. That was one of the worst parts of my life. You can always come down to Florida," Antonino offered.

"If I do I'm bringing Gabe and Richie. Package deal."

Gerry began the second game with the full complement of cards and started the mana ramp with a turn 2 Edge of Autumn. Ant got his card advantage online with a Dark Confidant. Gerry cycled an Edge of Autumn at Ant's end step by sacrificing a Flagstones of Trokair. ("That's a really good combo," Ant remarked.) Gerry then plopped a Serrated Arrows into play that immediately ate the wizard. Ant replaced it with the less powerful Nantuko Husk. Gerry gave it an arrowhead counter and played a Loxodon Hierarch to hold down the fort.

Ant had the immediate answer to the Hierarch in the form of a Char, and he got in for 1 before Gerry put the final arrow in the Husk. G-money then used his Riftwing Cloudskate to refill his quiver.

Unfortunately, Antonino didn't really have a follow up. He just drew and passed the turn to Gerry. Gerry took advantage of the lull to drop two Aven Riftwatchers into play. He was is total control of the game at this point. Ant simply drew and passed for another turn. Gerry swung his whole team in to drop Ant to 10, and then played another Loxodon Hierarch to put himself at an unapproachable 31. Antonino peeked at his next card and then put the rest of his cards back in the deck.

"The deck isn't too bad when I don't mull to four," Gerry pointed out. When the judges came by to add the win to his column, he let out a "Yeah, scoreboard!" 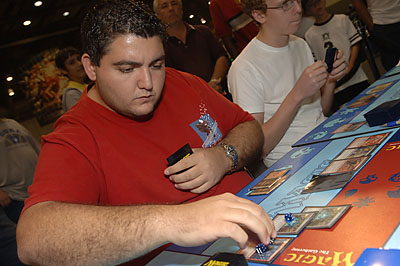 Ant started the rubber game off by suspending his deck's namesake, the ten-cost Greater Gargadon. When he followed that up with a turn-two Dark Confidant, Gerry sighed, "every game." Awkwardly enough, Ant didn't say the same thing when Gerry played a turn-two Wall of Roots again. On the third turn, Ant dropped a bomb-Magus of the Moon. Since all of Gerry's lands were nonbasic at the time, that made his only green source his Wall of Roots. Luckily for him, he had another in his hand, and he used the first to play the second, and then used the second to play a Tarmogoyf.

Ant kept playing more dudes, though, as he played an Epochrasite and suspended another Gargadon. He immediately sacrificed his Epochrasite to his first Gargadon, bringing the big guy to five counters. Gerry drew, played a Flagstones of Trokair, and passed the turn. This time, when Ant flipped a card for his Dark Confidant, a 10-life loss was staring him back in the face. Gerry chuckled as Ant put the Gargadon into his hand. He was now at 6. Due to Gerry's Walls, Ant still couldn't attack, so he just passed the turn back, content to wait on his Gargadons.

Gerry prepared for the coming Onslaught by suspending a Riftwing Cloudskate off of his lone Island. Before he could take 6 from his Confidant, Ant fed the little man to his lowest Gargadon. On his turn, he sacrificed his Mogg War Marshal to take the last counter off and sent his beast and his newly large Epochrasite into Gerry's territory. Gerry got hit for 4, chumping the Gargadon with his Tarmogoyf.

Ant added more men to his army on the next turn in the form of a Scorched Rusalka and another Magus of the Moon. That Rusalka was going to prove to be dangerous as Gerry's life total began to dwindle. Ant sent his team in, and Gerry was again forced to chump the Gargadon. He fell to 10. When his next turn failed to really cough anything up, Gerry conceded to Ant's massive swarm.