all it the stretch run. Call it the elimination rounds. Call it do or die. Call it some pretty tense Magic.

No matter what you call these last few rounds before the Top 8, there's no doubt that every match seems to count that much more for every player in contention. And when those players just happen to be teammates playing a 75-card mirror, and those teammates happen to both be ranked in the Top 10, and those ranked players are vying for spots in the World Magic Cup...well, suffice to say there's a lot on the line here.

Which almost makes it something of a relief that the two players who fit all of those descriptions sitting the text feature match area are teammates and friends. No. 3 Owen Turtenwald and No. 7 Tom Martell have been members of the Pantheon side of ChannelFireball for some time now. They're about as familiar with one another as two players can be. They were so familiar they even showed each other their sideboards before the match when Turtenwald wasn't quite sure if they were an exact 75-card mirror or not. 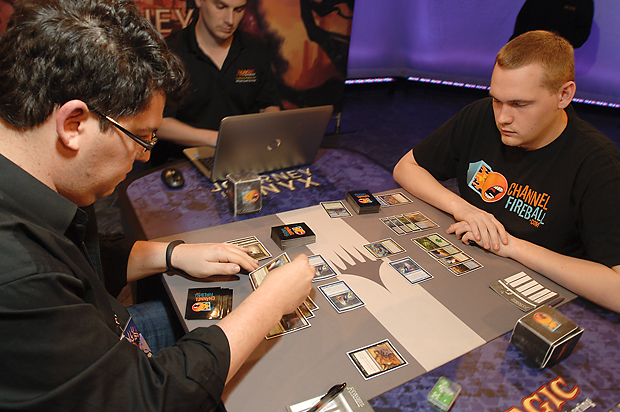 The two ChannelFireball Pantheon teammates, No. 3 Ranked Player Owen Turtenwald and No. 7 Ranked Player Tom Martell, were both running the same 75 cards.

Yeah, just one deck in this case. The pair are playing an identical BUG Control deck, featuring the mana fixing of Courser of Kruphix and Sylvan Caryatid, black removal and Reaper of the Wilds, and blue planeswalkers and Prophetic Sphinxes. It has, so far, been the deck of the tournament in some variation, with both Channelfireball teams bringing another version of the deck—and doing well with it—despite working independently.

The Pantheon list is a bit better tailored to deal with aggressive strategies, but keeps the same core of the deck intact.

There's actually a ton of decisions to be made in the mirror, making for incredibly interactive – and incredibly long – games with plenty of decisions that can make or break a game. And in this match, one wrong scry, one bad attack, or one missed Thoughtseize could spell the difference between a Top 8 or a free-fall.

Both players stuck to the script, playing scry lands and developing their mana and board presence early, trying to eke out any advantage they could when the opportunity arose. Coursers were cast and removed, Read the Bones, and Prognostic Sphinxes burned through the tops of libraries.

The two were, appropriately, mirroring each other pretty closely.

Martell started pulling ahead when he found a second Prophetic Sphinx to trump Turtenwald's solitary sage of the sky. That led to Turtenwald trying his best to keep one tapped down with removal in hand that was otherwise worthless. All of Martell's scrying landed him a Psychic Intrusion, a particularly powerful card in the mirror that can steal a card from an opponent and put it, essentially, in your hand.

But Turtenwald wasn't letting up. His own scrying yielded a Reaper of the Wilds, a threat just as resilient and just a touch more deadly than Martell's flying squad. He was behind on the board, but he had the tools to make the game interesting. 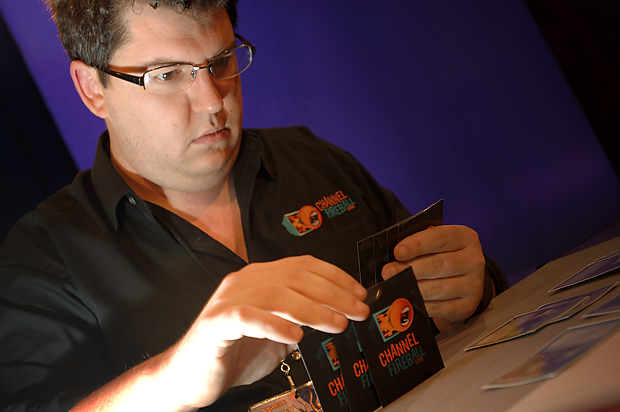 Martell pushed an advantage with an extra Prognostic Sphinx.

In order to keep the temp in his favor, Martell used Hero's Downfall to tap Prognostic Sphinx for a turn, hoping to jump too far ahead for the Reaper or the race it represented to matter.

Turtenwald, however, had one last trick up his sleeve. Silence the Believers tapped both of Martell's Sphinx's and bought a turn back, allowing the No. 4 Ranked Player to threaten lethal if Ranked Player No. 7 sitting across from him couldn't fight back.

But with a full grip and plenty of mana, Martell clearly had to have something.

That something was his own Reaper of the Wilds, a card perfectly capable of holding the fort for a turn at least. Which it did. Barely.

Turtenwald drew Psychic Intrusion and stole a Silence the Believers from Martell's graveyard, meanwhile hitting for 3 damage off a Sphinx and sending Martell to just 4 life, all while gaining another set of scrys.

Every turn was fraught with both players running scenarios. What if he gives hexproof here? What if he attacks this way? What if I tap my mana that way? You could see the gears turning for both players with every bit of new information.

More moves and counter-moves. Kiora, the Crashing Wave shut down Turtenwald's Prognostic Sphinx for a turn, Silence the Believers permanently silenced one of Martell's and tapped another for a turn, and dueling Reaper of the Wilds continued to stare each other down.

At least they did until Martell was able to pull the trigger on a pair of removal spells as Turtenwald tapped low. Both of them together succeeded in removing the Reaper, and Martell crashed in with his 4/5 for the final points of damage.

The advantage Martell gained from having two Prognostic Sphinxes certainly helped push him to an advantage in the first game, both on the life total front and when it came to stacking his library. The power of the Sphinx is pretty much that, once they get going, you rarely have a dead draw. And considering the spice that made Martell's draw so nice, he definitely benefit from experiencing twice the prognostication.

Martell jumped the gun in the second game with an actual, honest-to-goodness untapped Swamp on turn one, enabling him to Thoughtseize before Turtenwald did, snagging, of course, a Thoughtseize.

After that bit of excitement, we were right back to mana base development, playing lands and Caryatids here, Dissolving a Thoughtseize there. You know, just control things.

The Dissolve, however, meant Turtenwald got the better of the Psychic Intrusions perched in both players' hands. With his choice of Reaper of the Wilds, Kiora, the Crashing Wave, Psychic Intrusion, and Hero's Downfall, Turtenwald stole the Reaper and prepared to ride it to victory. Or at least some kind of advantage. 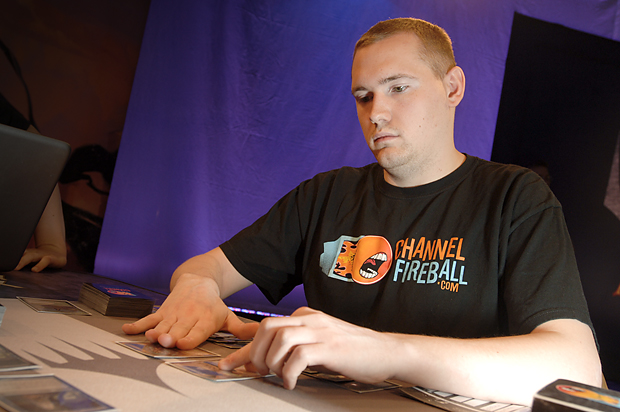 Turtenwald intrudes on his opponent's parade.

Instead of firing back with his own Intrusion, Martell tried to one-up his teammate with Kiora, the Crashing Wave, only to see him drop his own Kiora immediately thereafter.

That was how these matches went with no over-the-top spell to put away a game. No card filled the role that Sphinx's Revelation did in Standard, or even Elspeth in block, and so both players were forced to fight for every slight edge on every turn at every phase.

At least the Kiora/Prognostic interaction was intriguing. Kiora had the ability to turn off a Sphinx for a turn, but Sphinx had the ability to ignore Kiora simply by discarding a card. But in a match so defined by small card advantage edges, one card could mean so very much.

That was why the deck played something like Psychic Intrusion, a card Martell cast in an attempt to break out of the Kiora/Sphinx dance. Instead, after resolving Intrusion and grabbing a Silence, he simply cast Hero's Downfall and removed the offending planeswalker. That, in turn, cleared the way for Turtenwald to slay Kiora with a Reaper of the Wilds.

But Martell was able to press his advantage as this point, chaining Read the Bones into Courser of Kruphix. Turtenwald fired back with a Prognostic Sphinx to start stabilizing, but Martell was eking out a slight advantage with every passing turn – enough to move into the lead, but not enough to give him a clear mandate to win at any point.

Meanwhile, time was running down. Pinched by the clock and penned in by Martell's many advantages, Turtenwald had no choice and no better options outside of attacking repeatedly with Reaper. He succeeded in pushing Martell as low as 2 life with a Prognostic Sphinx before the following scenario took place:

Martell has two Sphinxes, a Reaper and a Courser but is at two life. Turtenwald has just one Sphinx, one reaper and a Caryatid, but 10 life. Time is nearly up, so Turtenwald needs to win this game outright to get any result this round. Anything less than that sinks him.

Martell plays a Kiora, but because of his low life total and the threat of removal taking out a Sphinx, he simply can't attack. A game that was about edges – most of which Martell held in terms of cards – was now about Martell's precarious life total. He needed, more than anything, to protect those last 2 life points for just a little longer or, barring that, find a way to deal 10 damage without taking two himself.

He started by making Turtenwald's Sphinx unable to deal damage for a turn, which Turtenwald allowed in order to be able to block. Once again, Martell's two Sphinxes were providing the slight edge he needed to stay ahead.

During the attack, time was called with Turtenwald still unable to break through. Another Psychic Intrusion into Turtenwald's hand and graveyard netted a Dissolve for Martell, sealing away any hope Turtenwald had. With no action spells and no way to get through for the last few points, there was no way out.

Martell was pretty adamant after the match that having two Sphinxes to his teammate's lone flying lion was key to the match.

"Absolutely. With two I can attack or block with both, or attack with one or choose how I want to do it. And you can miss on cards with scry 3, but you're not missing much on 6."

He said that Reaper of the Wilds did trump Sphinx in a race, but was easier to chump with random creatures. Sphinx, on the other hand, had to be "chumped" with removal.

"There's a lot of variation in that match-up, but I think I played it okY," Martell said, still holding out hope for a Top 8 berth with three more wins.

2 Reaper of the Wilds 4 Silence the Believers 3 Kiora, the Crashing Wave 1 Agent of Erebos

2 Reaper of the Wilds 4 Silence the Believers 3 Kiora, the Crashing Wave 1 Agent of Erebos