Round 13: Nick Eisel vs. Jeff Cunningham 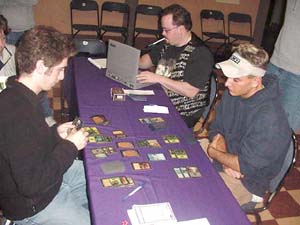 Nick Eisel has been making waves in the Grand Prix today, both for his success as the #1 ranked player on Magic Online, but for his sometimes-startling Rochester picks that have ruffled the feathers of more than a few pods. Still, it's really hard to argue with success - and success is his watchword today, with a 12-0-1 record. He's almost certainly guaranteed a berth in the Top 8, win or lose - he's just in it for the ratings points.

Jeff Cunningham has had a handful of top 8s at places around the country, with good showings at Canadian Nationals and particularly Grand Prix: Tampa, but the ultimate prize has yet eluded him.

Cunningham chose to go first, and both kept. Cunningham laid a forest and cycled his forestland, while Eisel signaled his U/G leanings with a forest and an island. Cunningham laid a raw threat in the form of an unmorphed Spined Basher, while Eisel laid the beats with a Wirewood Savage. He chose to take the three rather than lose his late-game card advantage - but was presented with a tougher choice when Cunningham brought up a Frightshroud Courier, which could embrace the Basher to create a 5/3 monster. Eisel responded with a Mistform Dreamer; sure as shootin', the Courier Embraced the Basher and dropped him to six the next turn, laying a morph. Eisel swung back as well, doing four damage in return, but he was losing the damage race quickly.

At the end of the turn, Eisel cycled the Tusker to get a land, then laid a Spitting Gourna.

Cunningham sent the Basher in again - and finally, the Wirewood Savage was sacrificed as Nick began playing for time. Cunningham laid a Symbiotic Elf as Eisel considered his options....

The option was a big one: Mythic Proportions on the Spitting Gourna, swelling it to a frightening 11/12 trampling beast, then swung for nine damage - dropping Cunningham from a comfortable fourteen life to a miserable five in one turn. The Symbiotic Elf looked mighty small in front of it, and the 1/1 tokens would do nothing against the trampler.

"No Swat, no Swat," Eisel prayed, realizing that it all came down to this turn; if Cunningham could remove his only blocker, he could swing for fatal damage - and Eisel was tapped out, completely helpless to whatever Cunningham chose to offer.

Cunningham considered hard, leading a spectator to ask, "What's going on?" You could practically see Cunningham's neurons fritzing off his scalp like a Fourth of July sparkler as he went into overtime, trying to figure out a way to pull out the win with what he had in hand - he had to. Now. This turn.

"I always have the biggest men, don't I?" Eisel asked the crowd as Cunningham flicked through his cards, trying to discover a strategy to ensure his win. "I mean, I had the Angel..."

Cunningham laid a Nantuko Husk and began to cast another spell, hoping to throw out enough creatures to sacrifice to the Nantuko and blunt the assault - when Eisel flicked a Crown of Ascension in Cunningham's direction, showing that it would be flying fattie beatings the next turn. Argued into futility, Cunningham conceded.

"X-1-1," Cunningham replied, using the shorthand that many pro players do when figuring standings.

"You could still make it," Eisel said with the air of a coach bucking up his players for the Homecoming game, convincing Cunningham that the Top 8 didn't really depend on pulling out a win here. "You could!" 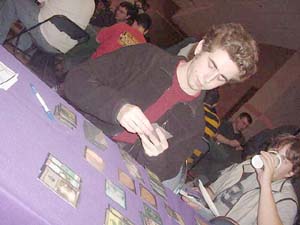 Cunningham chose to go first, and led off with the ever-popular Wretched Anurid; Eisel responded with a Wirewood Herald, which chumped and died the next turn, only to go fetch a Wellwisher to stave off the early beats. Cunningham created a Nantuko Husk, fetching an appreciative "Nice" from Eisel.

Unfortunately, Nick got to three lands, all of them forests, and saw no blue. Cunningham laid a Symbiotic Elf, causing Eisel to exclaim, "Sheesh, what a curve!" He cycled his Tusker and fetched, not surprisingly, an island. Now up to a semifunctional four mana, where he could begin to mount a defense, he cast the Wellwisher and passed; Cunningham robbed him of that defense by casting a Festering Goblin, sacrificing it to the Husk, then swinging - or starting to. A cycled Choking Tethers staved off the Husk that turn. However, the next turn presented no additional defense, and was his undoing.

The third game, once again both players came quickly out of the gates, with Eisel's ever-handy Wirewood Herald and Mistform Dreamer staving off Cunningham's Festering Goblin and Wirewood Elf. Cunningham, showing only two lands, swung into Eisel's defense - Elf slew Elf, but the Festering Goblin got through. Unfortunately, one elf was smart enough to call for mommy as it died - fetching Wellwisher, hoping to get some life to win through to the late game.

Cunningham laid Nantuko Husk, which reporters all over The Sideboard are getting sick of writing about. After a moment's though, Eisel swung back for two, laying his Wellwisher and just daring Cunningham to attack. The life would be coming, oh yes it would...

Until Eisel laid Mistform Mask on the Husk, potentially increasing the elfage on the table - and, more importantly, changing the always-fatal Husk into a Wall at will. He swung with the Husk and the Goblin, and not surprisingly Eisel didn't block; after not blocking, Cunningham laid Crown of Ascension on the Wellwisher and played a morph; Eisel cycled the Tusker.

Cunningham sacrificed the Goblin to the Husk to remove the last creature, the lonely Mistform Dreamer, from the board, then attacked with Morph and Wirewood, since his Husk suddenly had graffiti on it. Cunningham's summoned a Barkhide Mauler to add more power to his side of the table.

Eisel laid a morph, and the Husk became a wall come Cunningham's next attack phase. The two morphs traded without the slightest sign of demorphing, while Mauler and Elf dropped Eisel to eight; he thumped his deck, looking for an answer. He laid a Spitting Gourna, which may not have been the answer he wanted; Cunningham sent with just the beast, daring Eisel to lose his only defense. Eisel declined, dipping into four life. 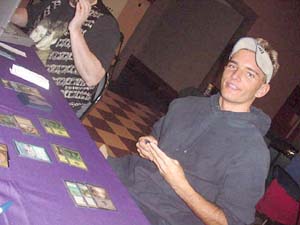 The long stare of life then came, as it was Eisel's turn to decide if there was a way of could survive the next turn, let alone win. He laid a Mistform Wall, passing straight into Cunningham's combat phase; the Gourna and Wall blocked the Mauler, leaving a very lonely wall of defense - a defense that looked even smaller when Cunningham created a Symbiotic Elf. Eisel decided that he didn't want a lonely wall, so he summoned an Arcanis to go along with it; the next attack brought the second Symbiotic Elf, making things very difficult - as Eisel was now at a slender one, with only two blockers between himself and certain death.

A Treespring Lorian brought some hope, but the Husk ate both Elves, creating four 1/1 tokens to swarm past the defense. Admittedly, Cunningham could have done that the turn before... But he still twigged to the strategy in time. Game over - and in a rare event in the top matches at high-level events, both players left happy. They're both at 34 points for the day, and if one gets in, the other is sure to follow. Not bad.