Round 13: Nicolai Herzog vs. Eric Froehlich 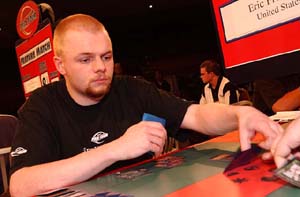 Nicolai Herzog and Eric Froehlich have each played for the Top 8 of a Californian Pro Tour, but neither one of them won the crucial round. Froehlich lost to Kamiel Cornelissen in the last round of LA 2001 and then teamed up with Kamiel and Kyle Rose for the team Pro Tour, where they barely missed a Sunday appearance. Herzog has one Top 8 to his credit, along with a win at the European Championships, but he's lost twice when playing for his second PT Top 8. Both Herzog and Froehlich are gravy trainers looking to move into Masters contention. With two rounds left, each needed two wins to move on to Sunday glory.

Both drafted aggressive decks and each is playing red. Herzog paired it with black while Froehlich made the more traditional play, pairing red with green. Froehlich's draw had a bunch of land while Herzog's had a bunch of removal and a pair of Ember Beasts. Froehlich had "Kamiel" (Kamahl, Pit Fighter), but Herzog had removal for that too. Froehlich still somehow managed to block and giant growth and burn all of Herzog's creatures and he was poised to win by discarding his hand to Frenetic Ogre. However, Herzog drew Pardic Firecat off the top of his library and the hasted up cat came over for the fatal damage one turn before Froehlich could finish implemented his Ogre plan. 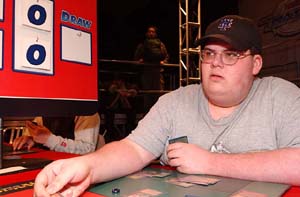 Froehlich and Herzog each had only red mana in game 2, but Froehlich's mountains seemed a lot better than Herzog's. Froehlich's summoned forth Mad Dog, Ember Beast, and Barbarian Lunatic while all Herzog could do was play a lone, helpless Ember Beast that watched Froehlich's monsters waltz by. Flame Burst and Firebolt put Herzog out of his misery quickly and they were quickly on to game 3.

Herzog led with Mad Dog and Froehlich answered with Wild Mongrel. A pretty good answer since Herzog was obligated to run his mad Dog into it. Froehlich followed up on turn 3 with a Seton's Desire on the Mongrel. Herzog had to point Acceptable Losses at it, but didn't seem to happy when he randomly lost his Ghastly Demise. Froehlich paused, thought, and decided to throw away Kamahl and a Mountain to save his 4/4 Mongrel. It was a good decision as Froehlich's deck operates just fine on three mana. Herzog was able to Demise away a Barbarian Lunatic, but he could do nothing about an Ember Beast much less the Mongrel.

Eric Froehlich moves on to play for the Top 8 for the second year in a row.