Round 13: Nicolai Herzog vs. Jon Finkel 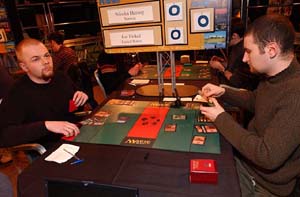 Once considered the best player to ever pick up a deck of Magic cards, Jon Finkel has seen better days. Mostly due to apathy, the Pro Tour, Grand Prix, Worlds and Invitational champion with countless Top 8 finishes seemed to not burn out, but merely fade away as he had poor showings at tournaments while Kai Budde claimed his spot as the best player in history. Finkel's apathy reached new heights when he stopped playing for a month prior to Chicago, and planned on not going despite the fact that the tournament was the last Pro Tour he was qualified for. Retirement? Not quite. He found a cheap flight and decided to come on short notice, and it's a good thing he did. A win here will advance him to the Top 8, bringing Jon Finkel back to classic form.

Herzog mulliganed to start, getting a pumped fist from Finkel and cheers from New York spectators and Johnny Magic fans Zev Gurwitz and Dave Price. Herzog's Imagecrafter was matched by Finkel's Goblin Taskmaster, and Herzog had Aphetto Alchemist. Herzon's curve continued with a third turn morph creature, and the Alchemist got through for a point thanks to Imagecrafter nullifying a Taskmaster activation prior to blocking. The Taskmaster attacked for one past the morph creature, and Finkel played his own morph. Lavamancer's Skill enchanted Imagecrafter, which gunned down the morph creature (Skirk Commando). With the Alchemist in play, this was bad news unless Finkel could find a way to kill the Imagecrafter. Sure enough, he cycled Solar Blast to handle the problem. Herzog played a second morph, and attacked with the first for two damage. 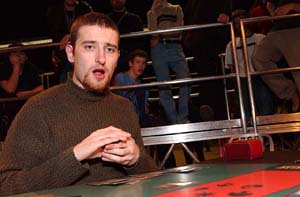 Finkel's Taskmaster attacked and traded with the Alchemist, and was followed by Everglove Courier. In response, Herzog morphed up Disruptive Pitmage to counter it. Ascending Aven gave Herzog a clock in the air, and Finkel summoned Spitfire Handler. The Aven attacked for three and Herzog cycled Slipstream Eel looking for a fifth land, but did not find it. Spitfire Handler was blocked by Disruptive Pitmage, and lived thanks to a cycled Primal Boost. The next Aven attack brought Finkel to eight, while Herzog was still at a healthy nineteen life. One more attack followed by a pair of Erratic Explosions finished the job before Finkel had a chance to catch up, hitting for two and three.

Finkel started with Everglove Courier, which was matched by Mistform Wall. Unfortunately, Finkel had no turn four play. Ascending Aven died right away to Solar Blast, Finkel summoned Sparksmith, and missed his fourth land drop. Herzog cycled Slice and Dice to clear the board, and Finkel used Vitality Charm to keep his Sparksmith around. On the following turn a fifth land showed up, and Elven Riders weren't as impressive as usual due to the Wall. Erratic Explosion took down the Sparksmith, and Herzog played his own. Elven Riders took down the Wall with the help of a cycled Primal Boost, and a cycled Solar Blast handled the Sparksmith- quite the efficient turn. Herzog came right back with Ascending Aven and Goblin Sledder, while Finkel attacked for two, and played a morph creature along with Wirewood Savage. Erratic Explostion targeted the morph (Skirk Commando) and Searing Flesh was revealed to kill it and then some. This was followed by Imagecrafter. 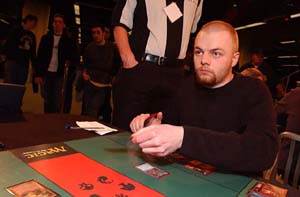 The attack continued for Finkel as he sent the Savage and Riders into the Red Zone. Goblin Sledder and Imagecrafter blocked the Savage, and Pinpoint Avalanche before damage caused both of Herzog's 1/1s to die while the Savage lived. The Aven attacked for another three points of damage, and Herzog made a morph creature. The Riders and Aven exchanged three point swings for a while, until Herzog put Lavamancer's Skill on his morph creature, revealed Disruptive Pitmage, and shot down the Savage. The Riders still got through for three damage, but the race was slipping away from Finkel. Choking Tethers slowed things down even more and Herzog attacked for the win as Finkel revealed a hand filled with land to match the many he had in play.