Round 13: Nicolas Labarre vs. Thomas Shaw 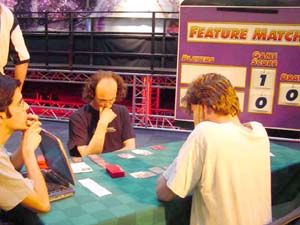 This is where going gets really tough. The last few rounds decide who comes back tomorrow to play under the spotlights and who will wander around London for a while before showing up to get some headphones to follow the Top 8.

As usual in French mirror matches the shuffling period was filled with stories and jokes. My French isn't good enough to follow it all but they certainly had a lot to talk about. Thomas seemed to be under the impression that Feature Matches had a lot of public.

Well, they often do but later in the round when the other tables finish their matches. Then, it does get very crowded.

Labarre started with turn two Llanowar Elves, turn three Call of the Herd while Shaw... dropped Swamps. Lots of them. Enough to hint he might be playing Monoblack Control.

The Call token gained a Elephant Guide and Firebolt brought Shaw to ten. The Guide effectively negated the Mutilates in Thomas hand forcing him to pass the turn, after cycling Undead Gladiator. Another attack brought Thomas to within range of the direct damage spell in Nicolas Labarre's hand.

A first turn Duress got Compost over Call of the Herd and Firebolt, revealing Phantom Centaur and Anger. Out went Compost.

Thomas: "I can't believe it! You only play one Anger! How can you have it in your opening hand?!"

Labarre found Llanowar Elves, but Shaw had Chainer's Edict for it. A second Duress showed another Centaur. After thinking for a while Thomas Shaw decide to take Firebolt over Call of the Herd.

That opened the way for Nantuko Shade. A two turns later Nicolas found his third land to play out Call of the Herd. Smother sent the token away. The Shade brought Labarre to fourteen. The next potential chump-blocker was Anger.

Shaw decided to wait a bit and instead play Graveborn Muse. Nicolas answered with the potentially unstoppable Phantom Centaur. The Muse started pumping out cards – acting as a one-sided Howling Mine – and Shaw cycled Undead Gladiator. 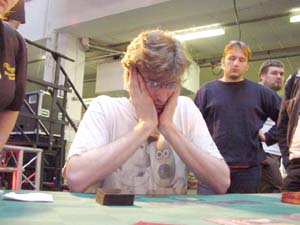 The Centaur entered the Red Zone, Labarre played Call of the Herd and a Volcanic Hammer got rid of the Muse.

Shaw traded his Nantuko Shade for the Anger, played Mutilate to wipe the table and dropped Undead Gladiator. Labarre agonized over his options and finally settled on playing another Centaur and sending it in.

That brought his opponent down to ten as well. On the next turn he flashback one of his Calls to level the score at seven (remember the Gladiator on Thomas Shaw' side). To stop the bleeding Shaw played Twisted Abomination with mana to regenerate it.

Nicolas did the math and passed the turn back. Thomas grabbed the opportunity to get rid of the lone Call token with Chainer's Edict and swing for the win. Yet, Labarre was ready with Violent Eruption.

The Gladiator died and Thomas fell to four. Nicolas played and flashbacked Call of he Herd for what seemed the winning play but once again the supposedly "dead" player had the answer: Thomas Shaw had... Smother.

With no way to stop the incoming Abomination, Nicolas conceded. Twice the game seemed over and twice they had fond a way out.

Thomas: "Nicolas, what kind of hand is that? Are you playing Burning Bridge?! You side in Earthquake?!"

He settled for a Volcanic Hammer hoping Labarre would be locked on his two lands. It certainly worked for a while. But two turns later, Nicolas blew up the Wooded Foothills to play the second Hammer. Meanwhile Shaw was going anywhere as well. He was locked at three lands despite continuously cycling Undead Gladiator. 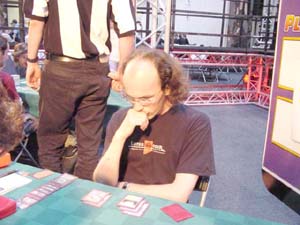 Labarre played Wild Mongrel but Thomas had Innocent Blood. Then he found extra help: Twisted Abomination. That gave him the fourth Swamp. Fourth Swamp meant he could play Graveborn Muse.

But Nicolas wasn't about to be outdone. He had his third Hammer to stop he car-drawing nonsense. With a hand that included Visara and Corrupt Shaw used his Gladiator like a madmen hoping to find just two more Swamps.

Nicolas found his second Red source and played out something we can call a clock: Sulfuric Vortex. Shaw answered with the fifth Swamp and Nantuko Shade.

Phantom Centaur seemed like the perfect blocker but again Thomas had the answer: Chainer's Edict. The Shade went in once again. Nicolas played Compost and Earthquake for one to clean the table.

Having found his sixth Swamp Thomas Shaw unleashed hell... well, Corrupt. The upkeep brought Nicolas to a single life point. He drew, stared at his hand, counted his mana... and extended his hand.