Round 13: Not So Good At Getting Rid of Them

Pro Tour graybeard Bram Snepvangers celebrated a huge milestone this weekend: His 600th Pro Tour match. Along that road he picked up four Pro Tour Top 8's, but the trophy has eluded his grasp. Not so for his opponent, Hall of Famer and Pro Tour champ Zvi Mowshowitz. This time the deckbuilder extraordinaire hitched his hopes to aggro: A brutal green concoction sporting Eldrazi Monument and Beastmaster Ascension. Snepvangers was playing a new take on the classic Vampires archetype. 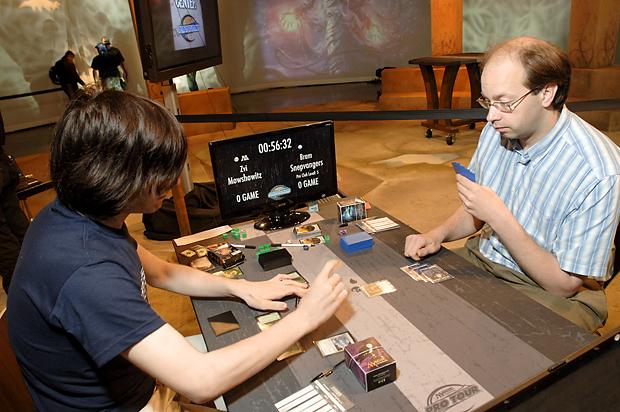 Snepvangers won the die roll but had no play off his first two Swamps. Mowshowitz, by contrast, had Arbor Elf, then Lotus Cobra, Khalni Garden, and Joraga Treespeaker all on turn two. Snepvangers tapped three for a kicked Gatekeeper of Malakir and Mowshowitz was fine with losing his Plant token.

Mowshowitz untapped and started to bring the pain dropping Dread Statuary and Eldrazi Monument, his creatures hitting for 5. Snepvangers put up Abyssal Persecutor to soak damage. The Monument ate the Treespeaker, but Mowshowitz had more power behind: Khalni Garden and Vengevine. Persecutor absorbed the hasty Elemental and another 5 damage left Snepvangers at 10.

Verdant Catacombs got Snepvangers his fifth Swamp for Malakir Bloodwitch. Unfortunately for him, Mowshowitz had another Vengevine in the wings and sent them both into the red zone. Snepvangers held onto his Bloodwitch letting one of the Vengevines through to put him at 6. He cast another Persecutor, and his shields were well in place.

Mowshowitz thought hard on his upkeep, eventually choosing to sacrifice his Cobra. He tapped four land and his Elf for a second Monument, supercharging his Vengevines. Bloodwitch and Persecutor headed to the grumper to keep Snepvangers in the game. Snepvangers finally got a chance to hit for 2 with his Gatekeeper, then spilled Kalastria Highborn, Bloodthrone Vampire, and Verdant Catacombs onto the table with one card left in hand.

On his upkeep, Mowshowitz activated his Statuary then sacrificed Elf and Vengevine. The other Vengevine and the land attacked. The remaining Persecutor stopped one of them, and Snepvangers fed the Gatekeeper to his Bloodthrone Vampire to drain for 2 and stay alive at 2.

He untapped and dropped Swamp, Mind Sludge clearing Mowshowitz's hand of a third Monument, Nest Invader, and Lotus Cobra; his creatures put Mowshowitz to 9. Mowshowitz lost his Vengevine and one of the Monuments, and had just four lands on the battlefield. Verdant Catacombs off the top let him swing in the air for 5, and since Snepvanger's last land was a Catacombs he couldn't eat his Vampires to stay in the game.

"That was the longest I've had two Monuments out," said Mowshowitz. "Usually they're dead long before that."

Snepvangers shipped back his initial seven and Mowshowitz thought for a minute before keeping. Snepvangers led with Inquisition of Kozilek and Mowshowitz grinned, "I kept a one-lander." He flipped over Forest, two Arbor Elves, Leatherback Baloth, Joraga Treespeaker, Vengevine, and Eldrazi Monument.

Mowshowitz had more accelerants in reserve, casting another Treespeaker and Arbor Elf. Snepvangers swung for 2, played his fourth Swamp, and cast Kalastria Highborn. Mowshowitz breathed a sigh of relief, "I thought we were going to the Marsh there."

He untapped, leveled his Treespeaker, then tapped both his creatures to summon Leatherback Baloth. Snepvangers had no fifth land and cast a second Highborn. Mowshowitz brought out Vengevine and Snepvangers was quick to put Hexmage in the line of fire. It stole the level counter off Mowshowitz's Treespeaker on its way out, and thanks to the two Highborns, drained Mowshowitz for 4.

Snepvangers found Verdant Catacombs waiting for him and fetched a Swamp for Malakir Bloodwitch, draining another 3; the life totals were 22 to 10 in Snepvangers's favor. He attacked for 4, leaving Mowshowitz at 6.

Mowshowitz went into the tank. After he emerged he played a third Forest, then attacked with Baloth and Vengevine dropping Snepvangers to 14. He then leveled up his Treespeaker and cast Kozilek's Predator. Snepvangers untapped and drew his card.

"Pretty good..." It was Marsh Casualties leaving Mowshowitz with just a single blocker and sending them to Game 3. 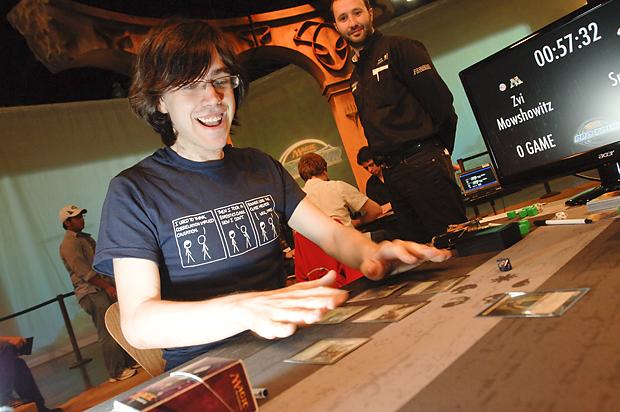 Both players mulliganed for the final game, neither excited about their six. Mowshowitz started with Treespeaker and was free to level it. He had no two-drop, however, and so got in for 1. Snepvangers put out a Vampire Hexmage. Five mana on turn three gave Mowshowitz a Wolfbriar Elemental and one friend.

Snepvangers cast Vampire Nighthawk and held back. Mowshowitz swung for 4, dropping him to 15, then cast a second Wolfbriar/Wolf duo. Nighthawk hit back in the air and Snepvangers summoned Abyssal Persecutor to protect home base.

Unfortunately for him, Mowshowitz had Eldrazi Monument sending his whole team (minus the Treespeaker) flying in for damage. The Persecutor stopped one of the Wolfbriar Elementals and the rest of the crew did 11, leaving Snepvangers at 6. Mowshowitz even had a follow-up Treespeaker for extra fodder.

Snepvangers thought hard on his options. Eventually he chose a second Persecutor, sitting on his defenses. Mowshowitz fed his Monument a Treespeaker and swung with Wolves and Wolfbriars. Both Persecutors and the Nighthawk blocked, and Snepvangers held on at 5. Then Mowshowitz tapped more mana for Leatherback Baloth and another Treespeaker, and that convinced Snepvangers to extend the hand. 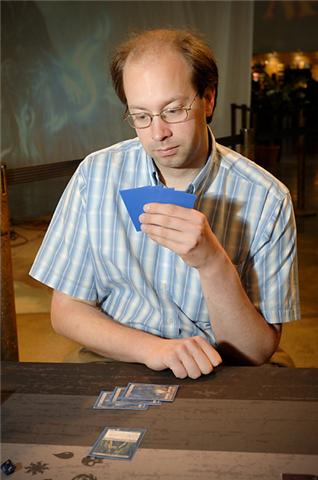 ...while his opponent Bram's hinted of Vampires.

After the match, Mowshowitz was frustrated at his play in Game 2 saying, "I forgot about the Hexmage disabling my Treespeaker." He had another line of play that would have worked out much better. A spectator asked him if he had ever considered letting himself fall into the negatives with Snepvangers's Abyssal Persecutors on the battlefield. Mowshowitz deadpanned, "I figure if he's playing Persecutors he'll be pretty good at getting rid of them." Snepvangers shrugged. "I'm not so good at getting rid of them..."