Round 13: Olivier Ruel vs. Ben Ronaldson 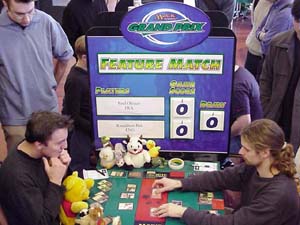 It's tough when friends meet in the field of competition. Olivier Ruel and Ben Ronaldson have known one another for two years, and while they happen to be separated by Pro Tour teams politics, that hasn't gotten in the way of their sharing a lot of laughs. Sitting next to one another during the draft, it was obvious that the two were trying to co-operate for their mutual success, but only so much success can be had when only one man can win.

Ben elected to go first despite Olivier's weak mana base, but the reports of Olivier's weakness were apparently exaggerated as Olivier started the game with first turn Diligent Farmhand, a card that can solve all such problems. Ben didn't have anything to do on turn two, but on turn three he played what many feel is the best common in Odyssey: Cephalid Looter. Olivier played his third land type on turn three without having sacrificed his 1/1, using the Forest, Swamp and Plains he had in play to cast Hallowed Healer, but Ben had a potent 1/1 of his own coming out the next turn in Bomb Squad, a card that at times can single-handedly win games. Olivier attacked for two taking Ben to 16 and cast Deep Reconnaissance, giving himself a second Swamp to go with a second Plains and ended his turn. By this time, the Looter was going to work, allowing Ben to discard his weaker cards in favor of the stronger ones he was now drawing. Ben used the Squad to put two counters on the Healer during upkeep, then cast Pardic Firecat and was done his turn.

Olivier's turn saw him kill the Squad in the nick of time, casting Morbid Hunger on it, taking the score to 21-16. Ben then cast Ember Beast, which looked especially big in the field of one-toughness creatures, as well as Mad Dog and ended his turn.

Olivier, staring down a lot of potential damage, played a strong defensive creature in Thaumatog, to which Ben remarked 'Is this good in your deck?', referring to the fact that Olivier was playing Chlorophant, Cabal Patriarch and Pianna, Nomad Captain, all mana-intensive spells. The Firecat, Beast and Dog then attacked, with Mad Dog trading for a land. After the Farmhand took the score to 18-14 in Ben's favor, Ben's Beast did three more points of damage as the Englishman cast Chainflinger, but Oliver top-decked the answer in Patriarch's Desire.

With Ben now having drawn twelve lands (this blow of course being softened by the Looter) he was now getting frustrated with his inability to finish the Frenchman off. He cast Blazing Salvo on the Healer, for which Olivier paid five life, then Thermal Blasted it, sending it to the graveyard.

Olivier's turn saw him think long and hard before casting Diabolic Tutor. 'What are you getting?' asked Ben, before noting it was 'worth a try'. It turns out that despite the power cards like Cabal Patriarch and Stalking Bloodsucker contained within his deck, Ruel chose to get Muscle Burst, but when Ben attacked the Sylvan Mighted Firecat into the 'tog and a second Farmhand, Olivier chose to sacrifice a land and the 1/1 instead of finishing the cat off. Ben then cast Aven Fisher and relinquished the turn.

Thirty-five minutes into the game, Olivier untapped, drew and declared his attack only to have Chlorophant tapped. Thaumatog attacked for one and Ruel passed the turn, and after Ben cast Nantuko Mentor, Ruel attacked with the 7/7 Chlorophant and Flashed back Morbid Hunger, killing the Puppeteer. A turn later, staring down a 9/9 and a potentially 10/11 Atog, the former English Champion conceded.

With Ruel only needing four points to make top 8, the first game's forty-two minute duration boded well. Ronaldson, more concerned with qualifying for San Diego than top 8, knew he needed to win and fast. Ben chose to play first and could only shake his head as Olivier again played a first turn Farmhand, which attacked for one before Ben played Ember Beast, which was met by Pilgrim of Justice.

Ben's turn four play of Bomb Squad could have been trouble for Ruel, but Oliver was able to cast Diabolic Tutor, getting Patriarch's Desire. Ruel cast the Desire, killing the Squad, which left two counters on the Farmhand. Olivier then cast a second Farmer, to which Ben responded with Nantuko Mentor.

Olivier's next play was a big one, casting Blessed Orator, an especially strong card against red decks and their damage based kill spells. On the next turn, he cast Hallowed Healer, and then repeated this act the following turn. With twelve minutes left in the round, Ben knew he was in trouble, needing to break through the Pilgrim, Orator and two Healers in time for a third game.

Ben drew and could only sigh at the ninth land he'd seen in fifteen cards. His next draw was better, with Aven Smokeweaver bound to occupy one of the Healers, but it was the draw after that one that might help him get through. Roar of the Wurm came into play, looking pretty strong with the Mentor, but held back a turn as a second 6/6 token came into play. Blazing Salvo then forced one Healer to tap before Ben served with the Smokeweaver, Mad Dog, Chainflinger, Ember Beast and the two Wurm tokens. Oliver assigned his blockers, allowing one Wurm to get through, but before damage, Ben cast Sylvan Might on the unblocked Wurm token, then did it again, and then activated the Mentor, making the token 20/20 and large enough to cinch the win.

The third game began with Olivier failing to play a first turn Farmhand for the first time, but Pianna came out on turn three, and with Ruel finding he had ten seconds, he went into turbo mode, casting Muscle Burst on turn four, but with both players knowing there wasn't going to be ample time to finish the game, the two friends shook hands and wished one another well in their final matches.