“One more!” Shuhei proclaimed praying to the skies as he sat down for the thirteenth round of competition at Pro Tour-Hollywood. The Japanese player was clearly alluding to the fact he likely needed just one more match win to begin IDing into his first Pro Tour Top 8 of the season.

“One more...” his opponent, Dutch player Robert van Medevoort, responded, “but not this round!”

Both players quickly led out of the gates with two-drops, Shuhei’s Black-Green Elves build offering up Wren’s Run Vanquisher while van Medevoort’s Faeries produced the eponymous tribal enchantment Bitterblossom. Because he had won the roll, however, it was Shuhei who was able to quickly capitalize by going on the offensive. He followed up with a Tarmogoyf and then Thoughtseize, which drew a flurry of responses from van Medevoort. Rather than lose the spells in his hand, Robert responded with Scion of Oona, then Slaughter Pact killing the 3/3 Vanquisher. Shuhei’s subsequent attack left the Dutch player at 13 life.

The two players squared off in a race, with van Medevoort’s fliers having an evasive advantage over Shuhei’s Tarmogoyfs and Treetop Village while the Japanese player enjoyed the advantage of creature size. It also didn’t hurt that Robert’s Bitterblossom was slowly munching away at his life total. A Cryptic Command bought van Medevoort a small window in which to breath, bouncing a Tarmogoyf and netting him a card while a Faerie Rogue token blocked Nakamura’s second ‘Goyf.

Things were getting tight, and van Medevoort recognized he could no longer afford to be on the beatdown. His opponent’s board had developed into a Treetop Village, Civic Wayfinder, and double Tarmogoyf, while van Medevoort’s featured two Faerie Rogue tokens, a Scion of Oona, and a Bitterblossom. At just 4 life, he was going to have to be very careful to get through the game without dying. Nakamura moved his attackers all in, and van Medevoort revealed a trick in the form of Terror, binning a Tarmogoyf. Through careful blocks and a Pendelhaven, van Medevoort survived the turn without taking any damage and even managed to Spellstutter Sprite a post-combat Garruk Wildspeaker from Shuhei.

Nakamura’s stream of over-sized creatures continued, and the Bitterblossom slowly ate away at van Medevoort’s life total. He needed to find an answer quickly, even if only for a turn, as his flying team could overwhelm Shuhei’s life total with the tiniest bit of breathing room. At just a single life point, van Medevoort passed the turn, dead on his upkeep if he didn’t have a solution to his Bitterblossom problem in hand. 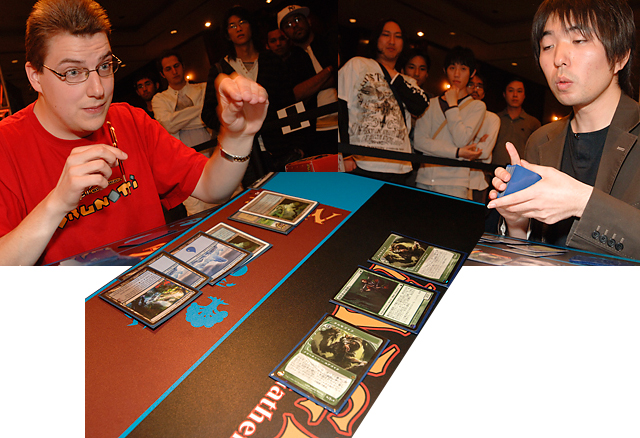 The Netherlands’ Robert van Medevoort is all that stands between Japan’s Shuhei Nakamura and an easy trip to the Top 8.

Shuhei, stoic as ever, gave no sign the that levity of the game affected him at all and attempted to move his creatures into the red zone one final time before being met with a surprise from van Medevoort: Cryptic Command! The instant was one of only two types of outs Robert had for the Bitterblossom, and it was going to tap down Shuhei’s would-be attackers. Nakamura acknowledged the play, and van Medevoort quickly bounced his own enchantment and tapped Shuhei’s creatures. Unfortunately for the Dutch player, his draw wasn’t enough breathing room: Shuhei simply played a land and revealed the final card in his hand: Profane Command. Shrugging, van Medevoort scooped up his board to move to Game 2.

Robert led off Game 2 with the best turn-one play from Faeries in the form of a suspended Ancestral Vision. The sorcery seemed to rub in the fact that Shuhei would be starting the game at six cards thanks to a mulligan. Nakamura simply led with a Llanowar Elves.

The third turn is when things got tricky. With the Visions winding down in the background, Shuhei attempted a Tarmogoyf, which quickly fell to Robert’s Spellstutter Sprite (with an activated Mutavault to ensure enough Faeries in play first). However the play was entirely a ruse, as Shuhei quickly dropped his own Bitterblossom into play. Because Robert hadn’t had his own ‘Blossom, and combined with the Pendelhaven Nakamura had led with on the first turn, the Japanese player looked to be in commanding position, Ancestral Vision or no.

Van Medevoort finally got to draw his three extra cards, which netted him a Mistbind Clique. He used that to slow Nakamura’s board development, but not for long. Nakamura quickly came back, making a Wren’s Run Vanquisher and continuing to crank out Faeries. He was looking to be in good position, but van Medevoort managed a play that wasn’t expected. With Shuhei at 12 life from sparse attacks and his Bitterblossom, the Dutch player went for Cryptic Command at the end of Nakamura’s turn. He chose to tap all of Shuhei’s creatures, then bounce a Gilt-Leaf Palace, leaving Shuhei with only a Pendelhaven untapped. Van Medevoort, meanwhile, had seven lands, three of which were Mutavaults, a Mistbind Clique, and Spellstutter Sprite. With Shuhei unable to block the total amount of damage to be dealt was 11. Conveniently that was 1 life less than what Shuhei was at, which meant his own Bitterblossom would kill him on his upkeep. Recognizing that reality, Nakamura graciously conceded.

The players echoed their Game 2 openers for the rubber battle, with Shuhei on Llanowar Elves and Van Medevoort on Ancestral. Both followed up with their marquee two-drops as well, as Shuhei made a Wren’s Run Vanquisher and van Medevoort made Bitterblossom. As Nakamura began his third turn, he quickly started doing some calculations. If he let the game continue, van Medevoort would surely get out ahead of him thanks to the Bitterblossom. Rather than let that happen, he decided to race.

Activating a Mutavault, Nakamura turned his team sideways. Van Medevoort was tapped out and had no choice but to take the damage, falling to 12 from a Vanquisher, Llanowar Elves pumped with Pendelhaven, and a Mutavault. His own Bitterblossom dropped him to 11, and things looked to be spinning out of control for the resident of the Netherlands. A second attack dropped him to 8, but Robert managed to find a solution to his creature problem in the form of Damnation. Unfortunately, that still left him facing down a Mutavault from Nakamura, which dropped van Medevoort to 5.

Inching closer and closer to death, van Medevoort again needed an answer to his own Bitterblossom. When Shuhei tried to attack again with his Mutavault, his opponent revealed just such an answer in the form of Mistbind Clique. Unfortunately for Robert, Shuhei had a Terror waiting in the wings to kill the 4/4, returning the Bitterblossom to play and costing van Medevoort yet another 1/1 token as the Faerie chumped Nakamura’s rampaging Mutavault.

Looking for an answer Van Medevoort found a prominent threat in the form of Razormane Masticore, but it was all for nothing at 2 life if he didn’t peel an answer the following turn. At 19 Nakamura was confident he could walk away the winner if his opponent just didn’t find a Mistbind Clique or Cryptic Command sitting on the top of his library. Van Medevoort drew for the turn, inhaled his breath, and revealed... a hand devoid of solutions to his Bitterblossom. At just 1 life from his upkeep Van Medevoort had no choice but to extend the hand.