Round 13: Osyp Steals the Show

Lebedowicz was playing a mono-red Goblin deck this tournament while Geoffrey Siron - last seen playing a near-mono-red draft deck while winning Pro Tour-London - was playing Golgari Madness, the Tog/Madness hybrid deck that has kept him and Craig Jones near the top of the standings for most of the tournament. 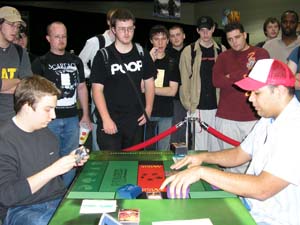 The crowd gathered to see what Osyp and Geoffrey were up to.

Mike Flores and I were discussing the matchup before the round and it was his contention that the Tog hybrid could not withstand a blistering early game from Goblins or Affinity. He seemed startled that the deck had been doing as well as it had with so many of those two archetypes running around. Hopefully this match between the American and Belgian standouts would shed some light on the subject.

Despite their geographic disparity, Osyp and Geoffrey apparently got to know each other quite well in Russia at the Ninth Edition Release Invitational. In fact, everyone who was at that event seems to have formed an uncanny bond surrounding events that are just not fit to print on a family website.

As they shuffled up for Game 1, Osyp winkingly tried to trade on that friendship to his advantage. "You don't have a die? Can't I just go first?"

Osyp did end up winning the flip and with a little help from a Mox made a turn-one Goblin Piledriver. Turn one was just a Watery Grave for Siron. There was no second land for Osyp but he did have a second Mox and played Warchief with one card left in hand. Siron took three more from Sac-land/dual land interactions and played Wild Mongrel.

Osyp's Ringleader found a Siege-Gang and a Prospector. He played a land and added Prospector to the board and attacked with everyone. Siron chewed on his blocks. Blocking Piledriver would obviously prevent the most damage but he wanted to kill the Warchief - had to kill the Warchief, really - and did so. He fell to two.

Osyp mock-scooped when Siron played his third land and Psychatog. Osyp was able to kill him with some Prospector mana to fling a couple of Siege-Gang tokens on the next turn.

Osyp rooted for his opponent to not play his most hated sideboard card, "C'mon no Engineered Plagues!"

Geoffrey, who had no Plagues in his board, misunderstood and seemed surprised, "You have my list?"

Osyp suddenly brightened, "You don't have them?"

"Well they don't kill Arc-Sloggers, do they?"

"How do you know that? Do you have my list?" asked Osyp, but he was quasi-bluffing. He did have Arc-Sloggers in his original list but audibled out of them in favor of other sideboard cards before the tournament. He was happy to have Siron believe Sloggers were coming in but did seem slightly perturbed that Siron had knowledge of the list he had intended to bring.

While the continued shuffling, a spectator's phone rang and he answered it. Osyp looked up sharply and chastened him, "Hey, do you mind? This is kind of an important match here." 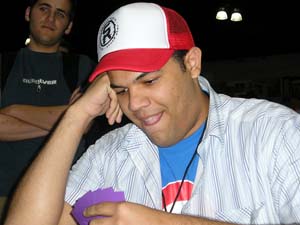 When Osyp wasn't playing to the crowd, he was lost in deep thought.

Osyp is a master though - you could call him the Terrell Owens of Magic - and apologized to Geoffrey as his cell phone suddenly 'rang', "Oops, hold on…I have to get this."

"Yeah…I'm playing against some guy…"

"Who cares who he is…he's Belgian or something."

"Yes he is good. He won the last Pro Tour. Look I'm going to have to call you back."

But Osyp wasn't done with the show. He looked over at Ryuchi Arita's girlfriend, who was looking over Arita and Olivier Ruel's match at the next table.

"Imagine your girlfriend is watching you play Magic and you are getting beat by someone like Olivier Ruel? Man!" 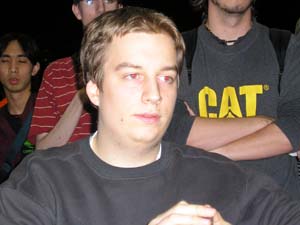 Siron could only watch as Goblins flooded the board.

Game 2 was filthy. Osyp led off with a Skirk Prospector and on the second turn used it to set off double Seething Song into Warchief and Ringleader (he only snagged a Prospector, pushing two Blood Moons to the bottom). Siron was able to Echoing Truth the Warchief and minimize the carnage, but when he untapped and played a Tog, Osyp shut him down with Pithing Needle.

The game limped along for another turn or two, but with an impotent Tog and no way to wipe the board Siron soon succumbed to superior firepower.

Siron was likely eliminated from Top 8 contention but he was actually more concerned with the likelihood of reaching Top 64. He needs the extra points to reach Level 5 in the Pro Players Club by the time Worlds comes to a conclusion.