Round 13:
Plasms and Plans Captured

Dueling Ætherlings helped split the first two games in the Patrick Chapin and Gabriel Nassif Bant Control mirror match, but it was a spot of bad luck and a particularly potent pachyderm that gave the French Hall of famer his tenth win on the weekend.

And yet Nassif downplayed the role of Ætherling in a match that was far more complex than it appeared on the surface.

"Ætherling is very good, but sometimes you can beat it if you get ahead on the board with Voices and Smiters and stuff," he said. "I think you want to be the aggressor, and sometimes it's too slow."

While the third and final game came down to Chapin missing his third land for several turns while a Loxodon Smiter beat down, the first two games were all about Ætherling. 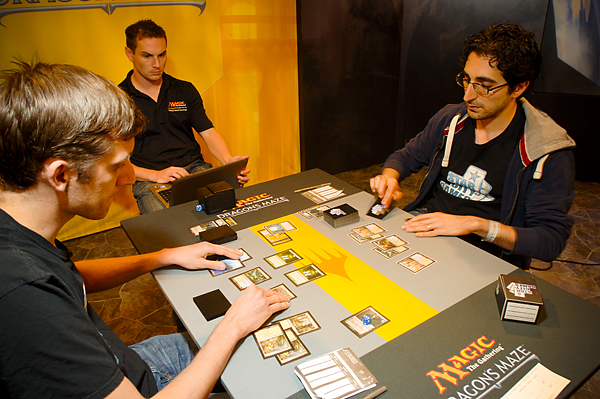 Patrick Chapin and Gabriel Nassif clashed in a Bant Control mirror match, with Nassif coming out on top when Chapin's deck fumbled on lands in the third game.

Sure. Other things happened. Voice of Resurgences supplied early pressure and made countermagic worse late, Loxodon Smiters slew Jace, Architect of Thoughts, Sphinx's Revelation drew cards and Gatecreeper Vines found lands. But each and every move was an attempt to set up Ætherling to seal the deal.

Chapin set himself up in the first game partially on the strength of early mana troubles from Nassif, the man known as Yellow Hat. A pair of Voice of Resurgence pressured Nassif into making some early moves to stay alive, and Chapin used the opportunity to land several Jace, Architects of Thought before Ætherling was able to steal the deal. 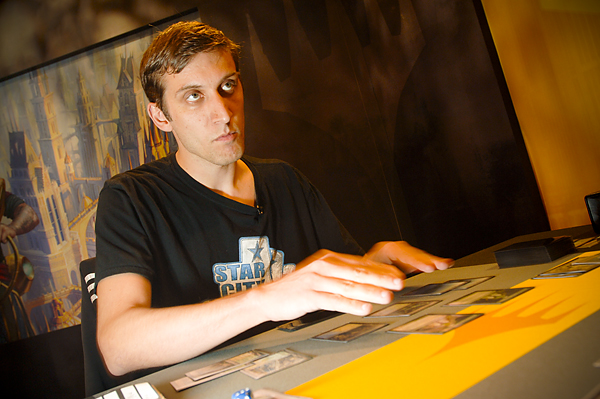 Chapin keeps up the pressure, giving himself the time to resolve both Jace and Ætherling for the win in the first game.

Ever mindful of the clock, Nassif was almost disappointed he nearly pulled out of his early mana screw.

"It kind of sucks. I started drawing well in the first game and dragged it on," Nassif said.

"Drawing just good enough to keep it interesting, to keep it close? It's alright. Now you get to go first and win," Chapin offered back.

Turns out, he was correct.

What was most interesting, however, was Nassif's sideboard strategy. He sided out his Jace, Architect of Thoughts in order to keep the full amount of Detention Spheres in the deck. While he said it was a mistake to side them all out on the play—a turn four Jace is still a solid play in his mind—he realized they didn't do all that much against Loxodon Smiters and Voices if things went long.

"It's not like Jace, the Mind Sculptor," he said. "You can actually activate it twice and still lose."

Instead, Nassif relied on Smiters and Voices to provide early pressure and open his window to Ætherling. 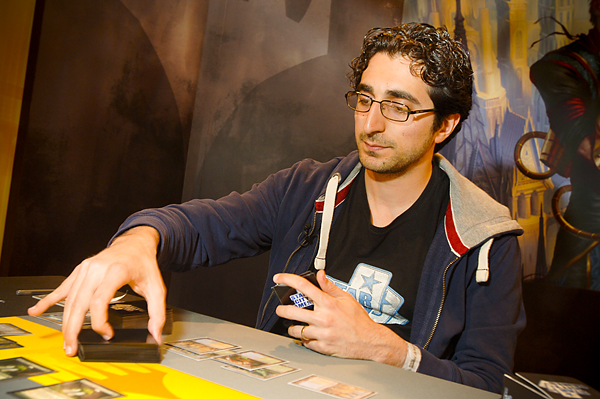 Nassif's Bant Control deck is capable of switching to an aggressively minded strategy that is less reliant on Jace, Architect of Thought.

"You need them," he said in regards the cheap beaters. "It's so huge to put on pressure and deal with Jace and to be the one to sit on the counters."

Chapin had a different strategy, it appeared, as his Jaces stayed in. But the Plasm Capture sequence and missing his third land for several turns in a row were what really sunk Chapin.

In fact, the first two games were so interesting, Chapin lamented the finish to the final game of an otherwise intriguing matchup.