this point, 16-year-old Gadiel Szleifer requires little introduction to most fans of the game. The Pro Tour-Philadelphia winner burst onto the scene as a precocious 14-year-old in New Orleans and has become one of the most successful Americans on the Tour. He somehow managed to post a 5-1 record on draft day despite the fact that he had played almost zero drafts since Ravnica came out, and as of 20 minutes before play started Friday, he still hadn't chosen an Extended deck. His default was still Affinity, and another strong performance could see Szleifer once again in Top 8 contention. 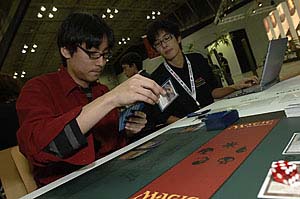 Akira Asahara is looking for a big performance on the biggest stage.

Sitting across from Gadiel is Japanese star Akira Asahara. Asahara has been the hot pick to be the next breakout name from a country of rising stars for some time, but his Pro Tour success never seems to live up to his promise. This weekend could finally be his time, as he's played well for the first two days but still needs to post a good Extended result to have a shot at Sunday play. This match is actually a rematch of what occurred in Los Angeles, where Asahara's Balancing Tings deck prevailed over Szleifer's Goblins -buoyed by the fact that Szleifer had to mulligan six times in two games. Gadiel's hoping for a bit of a different result this time around.

Szleifer cast a turn-one Arcbound Worker, while Asahara tossed down the oh-so-familiar sacrificial lands that could only indicate he was once again playing Balancing Tings. Asahara had a Sensei's Divining Top on turn two, but it disappeared with Pithing Needle on the stack, and the Needle shut down any further Top tricks. Szleifer pondered his third turn for a considerable amount of time, casting Arcbound Ravager and then following that with Myr Enforcer before pushing his Ornithopter and Arcbound Worker into the fray. Artifacts disappeared from the board, and suddenly there was a 5/7 flying kite, rapidly eating away at Asahara's life total.

Ice from Asahara merely cycled to draw an extra card, and on his own turn a Balancing Act wiped the board clear, ending Gadiel's threat. Asahara followed that up by laying a land. One turn later an 8/8 Terravore rumbled onto the board and trampled Gadiel before he ever found another land.

"I did everything right to have him dead next turn, too. It took me like five minutes to do the math and it just didn't matter," noted Szleifer. 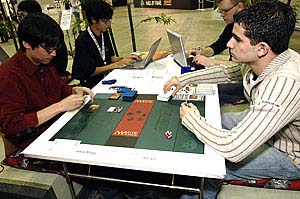 Despite the fast start, Szleifer couldn't contend with Asahara.

Asahara mulliganned twice to start Game 2, but still had the turn-two Kataki, War's Wage he needed, blunting what would have been a tremendously explosive turn from Szleifer. With two artifacts and a Frogmite on the board plus a land, two more Frogs, and a Myr Enforcer in hand, Gadiel's army would have multiplied faster than rabbits in heat if not for the meddling legendary spirit.

As it was, Kataki once again proved he was very good at his job of keeping the droids in check while beating down for two. Anurid Brushhopper showed up to the party and increased the clock and Boom! went the teenager, a victim of a rather miserable matchup.

The only other thing to note here is that Szleifer cast a Cabal Therapy about midway through the game naming Balancing Act and whiffed, but Tooth and Nail was revealed in the process, an extremely saucy card from the man who only seems to win in Japan.