Round 13: Raphael Levy vs. Eivind Nitter 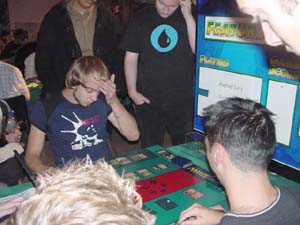 Both players won their first round and need to win the next two as well to still have a shot at a place in the top 8. Eivind was really unlucky during the draft but still managed a solid deck while Rapahel got an average deck with 2 huge bombs: Akroma's Vengeance and Insurrection. You can read about the draft here.

After a thinking long and hard Rapael decided his opening off seven wouldn't be good enough; he kept his second hand though and even had a turn play: a Gustcloak Runner. Eivind played a second turn Wirewood Herald which he described as a good blocker. A Severed Legion came down next turn and it started the beats. Raphael just laid 3 morph creatures stalling on three lands. A Wellwisher came down on Eivind's side and with the three Elves in play Raphael could better get rid of it quick. When Eivind played Prowling Pagolin he said: "Any player may sacrifice two, I choose not to".

"I do" said R "or do you want to sacrifice 1 on 1?". He then proceeded to sacrifice a morph guy and his useless Gustcloak Runner. Due to the fact he couldn't get rid of the Wellwisher Raphael wasn't able to really force a lot of damage through and Eivind kept the beats going with his Severed Legion. He didn't want to wait any longer and give Raphael any outs so he just cast Tribal Unity for four, naming Elves and swung with his team of three Elves and Raphael had to pick up his cards.

Raphael decided to start again and this time kept his opening 7. Raphael played a turn 2 Glory Seeker and a turn 3 Glory Seeker and a Goblin Taskmaster... who says this is a slow format. When Raphael attacked with his team Eivind blocked a Seeker with his Snarling Undorak. Raphael had a trick in Pity Charm. Prowling Pangolin removed two little beaters but Eivind still couldn't handle the horde of creatures Raphael had at that point. 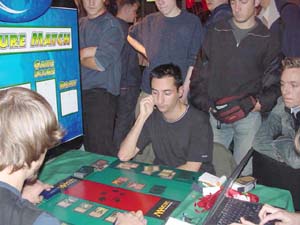 Now it was Eivind's time to start and he gladly accepted after the beating he received last game.

No mulligans again and Raphael had his turn 1 Gustcloak Runner. Like game 1 he attacked turn 2 and again Eivind blocked with his Wirewood Herald; of course Raphael removed his Runner from combat once again. After the usual amount of small dorks from Raphael's side Eivind laid Silklash Spider which probably has enough toughness to hold back Raphael's entire deck on his own. He also added a turn 7 Krosan Tusker and things were starting to look grim for Raphael. When it attacked next turn Raphael gang blocked with three creatures but when Eivind just played a Cruel Revival to remove one of the blockers so the Tusker stayed alive and all the dorks died. At this point even Insurrection wouldn't have helped Raphael anymore because Eivind would be able to kill two of his own guys with the Shock and Smother he was holding.