Round 13: Raphael Levy vs. Sim Han How 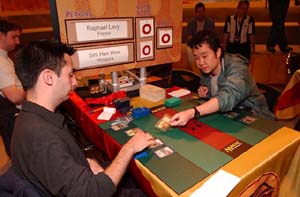 Pro rivalries happen for a number of reasons, whether a clash of personalities or a sincere respect for a worthy opponent. At this Worlds competition, a friendly rivalry has sprung up entirely by chance. Malaysian National Champ Sim Han How and Raphael Levy of France have been hanging out at the top of the standings since the close of Day 1. They faced each other in Standard, and How won. Then they wound up in the same draft pod twice, and split a match apiece. Now they have to do battle in OBC, and Levy's eager to even the score at 2-2.

What makes it all the more amazing is that neither player has lost a match, except to the other.

Levy started with Nimble Mongoose and Werebear, falling to How's Innocent Blood and Chainer's Edict. Wild Mongrel survived to hit once, but Levy had no action on his fourth turn. How Sludged away his hand.

Things were quick and brutal from there. How found Cabal Coffers and busted up the Mongrel with another Edict, using Rancid Earth on a forest for good measure.

Levy's only play was Werebear. How dropped a second Coffers, Edicted from the graveyard, played another Earth and Diabolic Tutor. Levy did nothing but watch Nantuko Shade hit play alongside a ridiculous third Coffers, and hit him for twenty-two all at once. 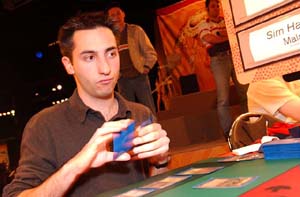 Levy was unexcited about a hand of Wonder, Werebear and five lands, but kept all the same. His Werebear met an Innocent Blood. Mental Note powered up his graveyard, and he lost a forest to How's Rancid Earth. Seton's Scout survived only long enough to be Edicted away.

Levy played his Wonder. How answered with Butcher, and now neither player had anything to add. The Butcher hit twice and How Earthed a land. Levy had plenty to spare.

Levy played his sixth land and thought hard. He decided to fire out Upheaval. His newly-freed Wonder got to hit once before How found an Innocent Blood. Seton's Scout went unanswered. Standstill made things even trickier.

Butcher stemmed the tide for How, but Levy came back with Mongoose and Standstill. How had to keep giving him the cards. Edict took out the Mongoose. Levy bounced back with Mongrel and Werebear, with seven cards still in hand.

How was in a bind. He played his sixth land and stared at his Laquatus's Champion. He played Diabolic Tutor to fetch a Coffers, and then tried to play it. Levy pointed out that he had already dropped swamp. How was dumbfounded at his mistake. From there, it was no problem for Levy to smash through.

Going first was not enough for How to keep on top of Levy's assault. He led with Mental Note and Nimble Mongoose, falling to an Edict from How. Another Note got Levy to threshold.

Werebear survived a second Edict thanks to Envelop, and that just let Levy ride a Standstill.

How cracked it immediately with a Sludge for five, leaving Levy with just one in hand. Unfortunately, that one was Breakthrough. Then he ripped Upheaval. Breakthrough for three got him another Breakthrough and a land. 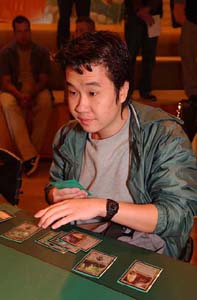 How's hand of two Braids and a Rancid Earth wasn't doing the job. He pulled swamp #6 and played Rancid Earth. Just one more swamp and he'd be able to turn on his Edicts.

Levy busted him to eight and played Breakthrough for four. How held the fort with Innocent Blood and then Braids. Levy trumped with Seton's Scout and Standstill. How let Braids die and ripped his seventh swamp, Edicting away the Scout.

Levy calmly played his sixth land and Upheaval. When his Mongoose went unanswered, he knew he was in good shape. Werebear joined it, and How extended the hand, evening their rivalry at 2-2. Perhaps the best-of-five will be settled at the final table.