Round 13: Regis Lavoisier vs. Fabien Francois 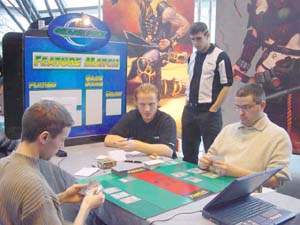 Both Regis Lavoisier and Fabien Francois are good French players. Both are relatively unknown outside of their country as they don't often travel much. Today they are still in contention for top 8 with 10-2 records. Francois is running another deck popular with the French today, blue-green madness, while Lavoisier is running the crazy red-blue Draco explosion deck the Japanese debuted at PT Houston.

Francois started with a Brainstorm on turn 1 then shuffled away the card he didn't want with a Flooded Strand. He followed with a surprise visitor to the Extended arena – Aquamoeba.

Francois was stuck with two islands and could only make another Aquamoeba.

Lavoisier wasn't faring much better as he dropped a Scroll Rack in an attempt to find a third land. He activated it and switched all eight cards from his hand.

Both Aquamoeba's came in next turn. With R1 mana open Francois chose to only switch the power of one. Sure enough Lavoisier had Fire/Ice and dispatched one. The second met the same fate the following turn.

Francois had Deep Analysis in graveyard, but concerned about what Lavoisier might do he kept mana open to sit on countermagic. Lavoisier had to go for more land, he tapped an island for Brainstorm but only found a forest leaving Lavoisier a window of opportunity. Lavoisier Intuitioned for an island at end of turn. He untapped and switched two cards from his hand with the rack. He then pointed an Erratic Explosion at Francois's head. Not quite as Erratic when you know the top card is Draco.

While this didn't kill Francois it left him at a precarious 1 life. He countered the Earthquake but had no answer for Lavoisier's Fairie Conclave. 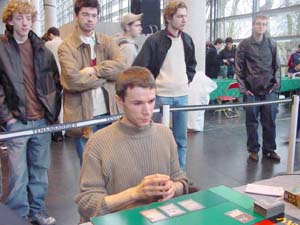 Francois found an early forest this time and started with the UG classic of turn two Wild Mongrel followed by turn 3 Arrogant Wurm.

Lavoisier switched 6 cards with a Scroll Rack. He made a Polluted Delta then passed turn. Francois asked if he could attack and Lavoisier got rid of the useless cards on top of his library with the Delta and Racked for the answer.

Fire/Ice looked a strong possibility, but it didn't prevent him from dying as Francois had a Logic in hand.

Game 3 Francois pulled off a Brainstorm/sac land trick of his own. He went for Aquamoeba only for Lavoisier to Mana Leak it.

Both players proceeded to build up their hands, Francois with Deep Analysis, Lavoisier with an amazing 3 Accumulated Knowledge. A Mongrel from Francois met with a Counterspell, but he could still make a Rootwalla. 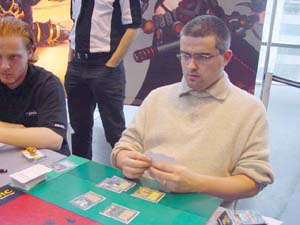 The turn after Francois went to add an elephant token to the mix with Call of the Herd. This sparked an interesting exchange as Lavoisier went for his 4th Accumulated Knowledge in response. Francois attempted to Logic it, this was countered and then Lavoisier dealt with the elephant token with a Chain of Vapor. A Scroll Rack looked good for Lavoisier with all the cards he'd drawn.

Francois wasn't getting any quick offence, just another Rootwalla as he flashed back Deep Analysis. He deliberately left himself 3 mana open for Circular Logic.

Lavoisier upset that plan by tapping an island end of turn with Ice. Francois Naturalized the Scroll Rack in the hope that would help but Lavoisier had already set his library up.

Boom. Erratic Explosion flipped over Draco and that was game and match to Lavoisier.