Round 13: Robert Bayardo vs. Nick Eisel 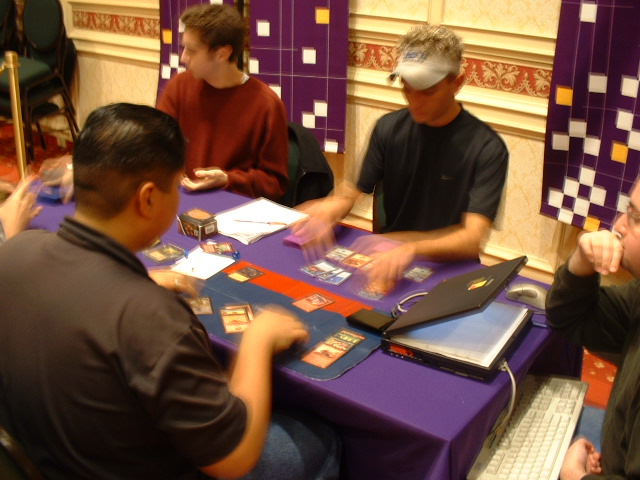 Nick won the die roll and promptly took the first mulligan at one of my feature matches of this entire tournament. His new six card hand contained wizards, Lavamancer's Skill, and land. Bayardo also cashed in his initial hand, settling for two mountains, double Craghorn, Oversold Cemetery and Spurred Wolverine.

Nick got the card-impaired game off to a roaring start with turn one Imagecrafter, turn two tapped cycling land. Bayardo, who had drawn his first forest by this point, traded casting morph creatures with Eisel on turn three. Eisel enchanted his Imagecrafter with Lavamancer's Skill, killing Bayardo’s morpher and bringing in the beats for two. 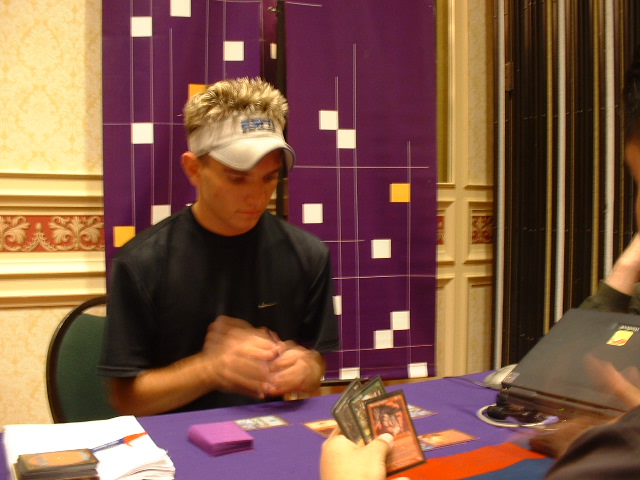 Robert played a second morph guy, and saved it from the wizard strike with a Vitality Charm-or so he thought. Eisel tapped a blue, revealing his morph creature to be Aphetto Alchemist, which untapped his wizardly brethren and shot down the now-dead Spitting Gourna.

Imagecrafter #2 hit the board, and two of the three wizards began their rather weak march into the red zone. Mistform Wall joined the party, making Eisel’s army of one power
beaters fourfold.

Bayardo hoped to slow down the slow bleed with a Battering Craghorn and his Cemetery. Eisel calmly shot down the beast as Bayardo failed to utilize the enchantment on his own turn, and died a turn thereafter to an army of dudes who all involved the number one.

Turn one Bayardo came out strong, as he played Elvish Pioneer and a swamp, bringing accelerating his mana a turn ahead of Eisel’s. The elf beat down past Imagecrafter, which died to an insect generated by Vitality Charm on the attack. Nick calmly played Lightning Rift on turn two, cycling Lonely Sandbar on turn three to draw a card and kill Bayardo’s morph creature. Sage Aven brought a stop to a second morph creature, as Robert failed to draw a Mountain with a hand full of red cards. Eisel took advantage of this mana stall by casting Sparksmith and Aphetto Alchemist in the same turn. 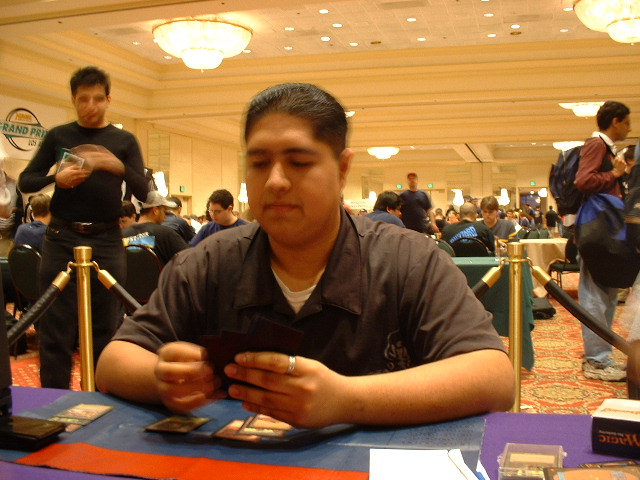 Bayardo, unimpressed, played a third morph creature for this game. Eisel untapped, and slapped down Goblin Machinist, allowing him to shoot down both morph creatures (Snapping Thragg and Treespring Lorian). Ironically, the very next turn, Bayardo drew Thunder of Hooves, the very card he drafted over Sparksmith, which was wrecking him horribly. The next turn, his first mountain allowed him to kill a creature via Solar Blast-and he chose to fry Aphetto Alchemist.

Eisel attacked with his force, activating his Machinist twice revealing Essence Fracture and Charging Slateback. This mercifully ended this drubbing post-haste. Bayardo, an amateur, was content to be so high up in the standings. This would enable him to collect quite a sizable prize by the end of this tournament, regardless of whether or not he made top eight.