Round 13: Roger Miller vs. Adam Kemp 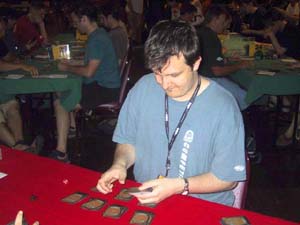 The reigning New Zealand Champion had only one more match to win to make the Top 8, unfortunately for him he was pared against former Australian National Team member Adam Kemp. Adam could also make the Top 8, so this round was truly a deathmatch scenario.

Adam had to mulligan away a hand of 6 plains and a Wild Mongrel, his next card being of course another plains. He then proceeded to stall on 1 land. Roger had no problems with mana however, dropping a 4th turn Chldhood Horror, 5th turn Childhood horror, and a 6th turn Stalking Bloodsucker. Adam finally got a second land and then dropped a Werebear, but all he had time to cast was embolden, and then again out of the graveyard with flashback. 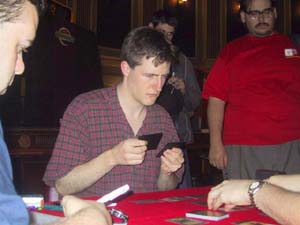 This time it was Roger's turn to get shy with mana, islands to be precise, his opening play was a Bog Wreckage, with Adam opening with a Wild Mongrel. He followed it with a Call of the Herd, which Roger had no choice but to sacrifice his land to Syncopate it. His next 4 lands were all swamps, and with Adam dropping two Cloudchasers to apply pressure. He managed to take down the Cloudchasers, with a Childhood Horror, which he was able to recur with a Gravedigger, but an Ivy Elemental for 5 mana moved the Match into game 3. 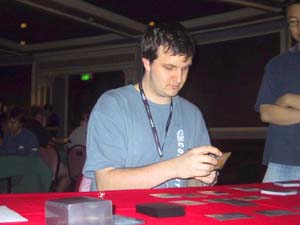 What looked like a third manascrew turned out to be an anti-climax. After mulliganing to 6 cards Roger was off to a flying start with a third turn dusk Imp, 4th turn Thought Devourer and a fifth turn Painbringer. Adam's drops were of far less quality, turn 3 - Auramancer, Turn 4 Blessed Orator, Turn 5 Werebear.

As Roger started to throw cards away to feed the Painbringer, Adam dropped a mongrel and proceeded to put the game into a high-speed mode. Roger always looked the winner however, a Patriachs Desire on the Devourer made it happen much quicker than expected. A Second Thoughts removed the Devourer, leaving Adam at 1 life. Consecutive drops by the Australian of a Cloudchaser Eagle and An Aven Flock challenged Roger to find different ways to get cards in his graveyard to fuel the Painbringer (Just a point of interest - there were 3 painbringers in the draft). The Kiwi champ proved his worth though, removing the obstacles Adam had placed in front of him, this was probably one of the better hands you could draw off a mulligan. Roger had kept the hopes of a Kiwi winning the Australian Grand Prix for a second year in a row. For Australians this is as bad as South Africa letting an Australian win in Cape Town.