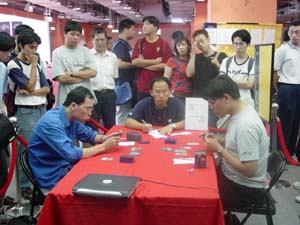 After a days worth of clubbering, just one match stands between these two hopefuls and Top 8 greatness. Both are local talents running unorthodox creations. Ming-Chih Wang is playing a green-white deck that features the tutoring power of Eladamri's Call. Sheng Hsun Hsia has gone all-out, modifying traditional blue-white control to add the power of Nantuko Monastery, adding in Genesis, Mystic Snake and Hunting Grounds along the way.

Wang won the die roll and started off with Elf, then Mongrel and Birds. He hit for three, then tried an end of turn Arrogant Wurm via Madness. Hsia stopped it with Counterspell. That only opened the door to Anurid Brushopper.

Hsia's life total was dropping quickly. He spared himself some damage with Repulse and Memory Lapse, but Wang had a second Mongrel. Hsia had no Wrath in hand. Another Memory Lapse bought him a turn, but with just Enforcer and Mystic Snake in hand he couldn't stop enough damage.

Things were more Hsia's speed in the second game. He had two blue up on the third turn, allowing him to stop an Anurid Brushhopper in its tracks. A second one resolved, but Hsia drew into Circle of Protection: Green.

Next turn, Wang used Eladamri's Call to get a Glory in his hand, then tried a Pernicious Deed, hoping to end the game in a hurry. Hsia had a second Counterspell. The rush of control hit Hsia full in the face. When Wang dropped Glory, it seemed Hsia Wrathed only because he could. He had Mystic Snake in hand, but only seven lands on the table. Of course, Wang had a second Pernicious Deed at the ready. 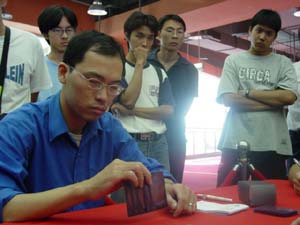 Then things really started to go downhill. Wang Called up a Genesis that got in the yard and started recursing threats in a hurry. Hsia had an abundance of countermagic, and soon had two Mystic Snakes beating down, but he had nothing to stop Genesis in the long term. He needed Fact or Fiction in the worst way. Two turns later he got it.

It turned on Nantuko Monastery and got him Meddling Mage and Mystic Enforcer. Wang tried to get in gear and Glory his way to a quick win. Hsia stopped him with Tangle. A lonely Bird of Paradise was all that stood between the Enforcer and victory. An all-out attack forced Wang to blow his Deed for zero, killing the monastery. Hsia dropped the bomb: Phantom Nishoba. Wang didn't have enough toughness to stop it from killing him.

Wang's first play of the deciding game was a Mongrel on turn four. Hsia countered it, and got bonked by Seedtime. The additional turn allowed Genesis to enter play. Hsia's rebuttal was Circle of Protection: Green.

That forced Wang to jump to the Glory plan. Hsia Memory Lapsed, then Excluded the incarnation. But Wang kept pressing. Spectral Lynx earned a Repulse, but Hsia had run out of steam. He memory Lapsed it on the following turn, and fell prey to Aven Cloudchaser of all things. His next draw was Hunting Grounds. Wang pressed with Spectral Lynx.

Hsia drew his next card and practically exploded with joy. With his full arm he tapped seven and slammed down Phantom Nishoba, even allowing himself some fist-pumps for good measure. 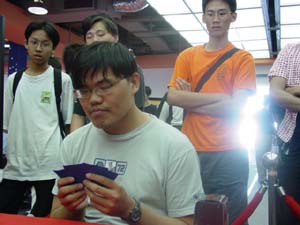 Wang was far from defeated. A Bird made it four toughness worth of men on the board, and with Glory in the 'yard he was only taking three. He tried a doubly-kicked Necravolver, a move that would take the game. Repulse sent it home, and now Wang didn't have the mana to protect his monsters with Glory. The Cloudchaser went to the graveyard.

He tried it a second time. This time Exclude put it away for good. Hsia played Deep Analysis twice. Wang made more creatures in hopes of outlasting the Nishoba, it was getting through for less and less damage. Genesis got countered, and then Living Wish fetched Nantuko Tracer to put in on the bottom of his library. Things seemed to be stabilizing. And then a Fact or Fiction turned over Wrath of God, clearing the way for the Nantuko Monastery.