Round 13: Sometimes the Bear Gets You

Thomas Huteson vs. John May

homas Huteson and John May were sitting at 27 points each coming into the round. With two rounds to go, it was vital to get a win here. They would go for that important win with vastly different archetypes-May was playing Solar Flare, while Huteson piloted a Gruul deck. Both players were new to the bright lights and high visibility of the Feature Match area, and it showed as they were quiet as church mice before the game. Antonino De Rosa, sitting at the next table, got them talking a little, but they mostly shuffled in silence before presenting their decks. John mulliganed to six after a minute of thought involving some pained facial expressions. He kept his six-card hand, and Huteson kept his first seven.

Land-go was the theme for both on their first turns, with May laying a Hallowed Fountain (tapped) and Huteson a Treetop Village. After another land-go from May, Huteson dropped a Mountain and suspended Rift Bolt. May's only play was a Nimbus Maze, and he fell to 17 when the Rift Bolt zapped him on Huteson's upkeep. Huteson fell to 18 from an untapped Stomping Ground, which he used to animate his Treetop Village and drop May to 14.

On his turn, May played a Court Hussar. He thought about the three cards for a moment before choosing one, then laid a Swamp. Another swing from Treetop Village brought May to 11, and Huteson followed that up by suspending his second Rift Bolt of the game. May Castigated Huteson, seeing Char, Seal of Fire, Incinerate, and Tin Street Hooligan. He removed the Char and swung with the vigilant Hussar, taking Huteson down to 17. Rift Bolt was Remanded this time, and May's Court Hussar jumped in front of the attacking Treetop Village, taking a lethal pounding from the apes. Huteson added Tin Street Hooligan to his side, and May answered on his turn by playing Aeon Chronicler as a 4/4, tapping out in the process.

Huteson capitalized by playing another Hooligan and a Mogg War Marshal, and suspending Rift Bolt again. Still with five lands, May thought for a moment before playing Tidings. He found his sixth land, laying a Godless Shrine tapped. Huteson's Rift Bolt knocked May down to 8. The red zone soon became crowded, with Treetop Village, two Tin Street Hooligans, and a Goblin token staring down Aeon Chronicler. The Chronicler took out the Village, but the combat damage knocked May to 3. Huteson had an Incinerate to end the first game.

Between games, both players remained quiet. They thought about their sideboarding decisions for a minute, looking between their unsleeved sideboards and a few cards in their decks. Huteson swapped in four cards, while May changed seven. Their deliberate sideboarding pace got them a time reminder from the judge, so they quickly shuffled and presented. 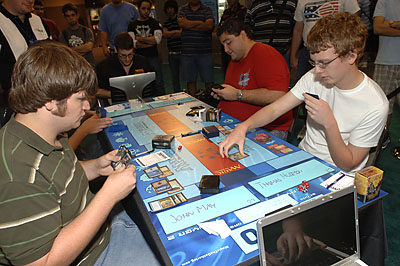 John May and Thomas Huteson both have a shot at the Top 8.

Both kept their opening hands, with May dropping an Island and Huteson using his Mountain to play Mogg Fanatic. May added a Plains to his board, took 1 from the Fanatic, but had a Remand when Huteson tried to play Mogg War Marshal. An untapped Watery Grave took May to 17, but only briefly, as the Aven Riftwatcher it enabled him to play brought him back up to 19. Huteson got his Mogg War Marshal this time, and added a tapped Stomping Ground to his side. May swung with his Aven and played a second one, leaving the life totals at 21-18 in his favor. Huteson paid the Marshal's echo and Incinerated the untapped Aven, putting May at 23, before attacking his opponent back down to 20. May swung with the Aven again, leaving Huteson at 16. He still had no fourth land, however, but did have an Azorius Signet.

Tin Street is known for its Hooligans, but Islands are known for producing counterspells, and Huteson's Hooligan met a Remand. His remaining lands (Karplusan Forest and Skarrg, the Rage Pits) did not allow him to replay it this turn. He did attack May down to 17, then took 1 from the Karplusan Forest to play a second Mogg War Marshal. May went up to 19 when his Aven Riftwatcher died, but he quickly replaced it with another, going to 21 and laying a Swamp. Huteson paid the Marshal's echo and tried the Hooligan again, but May had the Remand once more. Undaunted, Huteson swung with his whole team. The Aven took out a Mogg War Marshal, who left a token behind, and May was at 17.

On his turn, May laid an Urza's Factory and suspended Aeon Chronicler for 1. Huteson matched him in the suspending saucy creatures department with a Greater Gargadon. He swung with the team again, and Aven Riftwatcher again blocked a Mogg War Marshal. This time, though, the Marshal was sacced to the waiting Gargadon, and May was at 13 when the dust settled. Huteson was finally able to resolve the persistent Tin Street Hooligan; losing Azorius Signet left May with only one white source. Aeon Chronicler came into play and quickly dove into the red zone, joined by Aven Riftwatcher. Huteson blocked with a token, fed it to the Gargadon, and went to 13. May wasn't nearly finished, though, playing a Court Hussar, Nimbus Maze, and yet another Aven Riftwatcher to go to 15.

Huteson pondered the increasingly-crowded board for a moment before pushing his three goblin tokens, Tin Street Hooligan, and Mogg Fanatic into the red zone. Court Hussar and Aven Riftwatcher blocked the Fanatic and a token respectively, and Huteson recorded May's life change down to 11. He tried to sacrifice his Fanatic and token at this point, but the judge ruled that, by recording a life total change, he had indicated that combat damage had resolved, making it too late to feed the Gargadon. Frustrated, Huteson played another Fanatic and passed.

May went up to 13 when he lost an Aven, then played Foresee. He swung with his 5/5 Aeon Chronicler, the other Aven Riftwatcher, and Court Hussar. Mogg Fanatic took a pounding from Aeon Chronicler and was tossed at May; the life totals ended up at 12-10 in May's favor. May played another Hussar, but Huteson had a Char at the end of his turn to make the life totals 8 apiece. Huteson went to 6 from an untapped Stomping Ground and played a second Char, evening up the life totals again at 4. There's an old saying that goes, "Sometimes you get the bear, and sometimes the bear gets you." This time, the bear, in the form of a third Char, got John May, giving Thomas Huteson the game and the match.

Thomas Huteson 2, John May 0
Huteson goes to 10-3, putting him in good position heading into the all-important last round. May falls to 9-4, ending his chances of making Top 8, but still guaranteeing him a very good finish in his first Nationals.