With a lot of players secure in their Top 8 berths, it fell to the reigning World Champion Makihito Mihara of Japan to play off for his place alongside them. He would be taking his traditional Blue-White Urzatron build up against the frantic Goblin hordes of American stalwart Sean Connor, bidding to be the only one of those who began on Saturday morning with the gibbering green men to make it to the final tables. 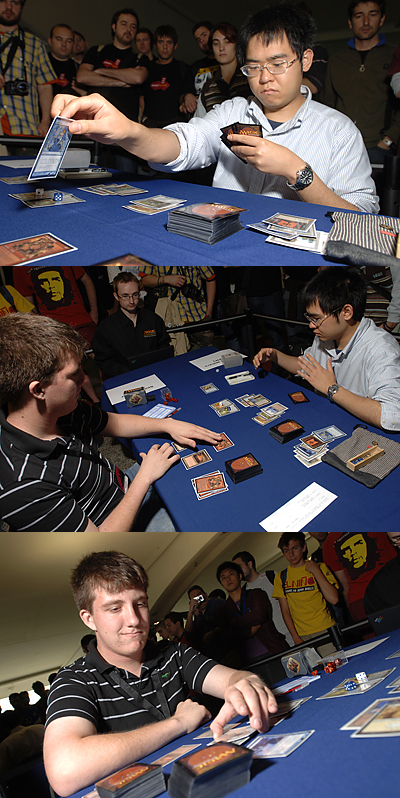 Sean Connor and Makihito Mihara play out the classic control vs. aggromatchup. Sean Connor won the dice roll and began as he meant to go on with a Barbarian Ring and Skirk Prospector on his first turn, while Makihito Mihara responded immediately with a Chrome Mox and Plains that allowing him to play a Chalice of the Void on the first turn, putting a single counter on. The Chalice immediately set to work and caught Sean out as on his second turn he tried to play a Rite of Flame to bring his Goblin Warchief into play, but when he was reminded about the Chalice, Connor could only shake his head at his error and pass the turn back to Mihara

The artifact countup to victory continued for Mihara as alongside his Chalice for one he prepared some Engineered Explosives for two. Things weren't going Sean's way and having failed to draw a third land he had little choice but to sacrifice his Skirk Prospector to bring in his Gobln Warchief, and followed it next turn with a Goblin Piledriver. Mihara's boobytrapped Explosives had done a lot to persuade the American to be wary of overloading the board with threats however, so he chose not to play anything else and only attacked for a conservative 5 points, dropping Mihara to 12 life.

At the end of Sean's turn Makihito was feeling a little unloved and brought up the Gifts Ungiven, asking Sean what he wanted to give his opponent as a present. Wrath of God, Urza's Mine, Urza's Tower, and Suncloud Expanse were on the shopping list and for Sean Connor it was hard to decide exactly what would make the perfect gift. In this format a Gifts Ungiven is perhaps the card that asks the most searching questions of your opponent as they are forced to guess from your card selection what you already have in hand. While separating the Urzatron lands between hand and graveyard was an obvious option, if Sean gave Mihara a Wrath of God did he have a second white mana source in hand to play it? On the other hand the very presence of Suncloud Expanse in the options hinted that Mihara already had a Wrath of God and needed white mana to cast it. In the end Sean played the percentages and handed Mihara a Suncloud Expanse and Urza's Mine, and Mihara showed how grateful he was by immediately laying that Suncloud Expanse and using it to sweep the board clean with the Wrath of God he had been holding all along.

Sean rolled out a lonely Goblin Piledriver as a miserable attempt to get back on the front foot, but with Mihara's deck gaining cards through a pair of Thirst for Knowledge the window of opportunity for the Goblin deck was closing rapidly. A second Gifts Ungiven again tested how generous Sean Connor would be, this time throwing up a Mindslaver, Academy Ruins, Urza's Mine, and Crucible Of Worlds. Sean knew the end was nigh and handed Mihara the Mindslaver and Mine. A turn later the dreaded mind-controlling artifact hit play, Mihara revealed the Academy Ruins in his hand, and Sean Connor admitted defeat, his devastating opening draw stopped on the very first turn by Mikihito Mihara's Chalice Of the Void.

It was serious and silent as the two players sideboarded, each looking as though they had a significant number of changes to make for the matchup as they clutched handfuls of sideboard cards. With a place in the Top 8 at stake for the winner, there was no doubt that it was all business for the two competitors.

Sean lead the way again in Game 2, playing Barbarian Ring and a Chrome Mox to give him a Goblin Piledriver on his first turn, while Mihara came out even faster and rapidly accelerated his mana with Academy Ruins and a Chrome Mox to play Azorious Signet—he would have the four mana he needed to play Wrath of God as early as turn two! Sean Connor really had no choice but to go for a blowout offense and really hope that Mihara wouldn't have the Wrath of God he was setting up for, summoning a Skirk Prospector and Mogg War Marshal to back up the Piledriver. Unfortunately for the American, the World Champion showed he was no man to bluff and cleared away the Goblins with a little help from the man upstairs and his divine Wrath. Sean threw his Warchief into the fray to try and make some more inroads against his opponent, but on only the third turn Mihara again showed how he had fought off so many aggro decks to make it to the cusp of the Top 8 by playing the devastating sideboard card Sphere of Law. As an enchantment that would prevent two of any red source of damage for no mana cost this single-handedly shut out 99% of Sean Connor's deck and left him with no option but to put his faith in a large Goblin Piledriver, and he rapidly built an army to support it, but this ovextension of his board position was exactly the invitation that Mikihito Mihara had been looking for to play a second Wrath of God and sweep the board clean while he was still on 9 life.

And Sean was pretty much done right there. Mihara rigged up some more Engineered Explosives with two counters to take care of the next Goblin Piledriver that arrived and Crucible of Worlds cemented Mihara's position. A Magus of the Moon set Mikihito back somewhat and bought the American some time, but with so many artefacts in his deck, and a Chrome Mox and Azorious Signet already in play the Magus wasn't as crippling for Mihara as it might have been. Sean turned to a Siege Gang Commander as a route to victory but groaned at his mistake when he realised that the Sphere of Law would even prevent the damage that he could deal by flinging Goblins at Mihara's head. His only hope was to find even more Piledrivers, a Goblin Matron reared one for him from his deck but that was immediately dealt with by the Engineered Explosives. This was now a straight race, could Sean Connor find his last Goblin Piledriver before Mihara found a solution?

The answer was no, on his next turn Mihara played a Chalice of the Void with two counters that would take care of any further Piledrivers. While Sean busily filled his side of the board with dozens of little green folk Mihara was able to relax behind his Sphere of Law in complete safety and wait for the Mox that would allow a Wrath of God to kill the Magus of the Moon. It finally arrived and with his Urzatron finally back online the Japanese had withstood the Goblin hordes and found victory, while Sean Connor was out of Pro Tour Valencia. As he scooped up his cards he paid tribute to his opponent's excellent sideboard choice.

"I had no way to win against that thing," he said, gesturing to the Sphere of Law. "No way at all."