Round 13: Steel Had All These

Both Daniel Gräfensteiner and Jeremy Neeman showed up to this round with 9-3 records piloting the fearsome Tempered Steel deck. With just four rounds to go in the event, either one of these players could go on a run and earn himself his second Pro Tour Top 8. (Gräfensteiner made the Top 8 at San Diego last year, while Jeremy Neeman made it to the elimination rounds in San Juan just a few months later.)

A Glint Hawk for Gräfensteiner made his air force even more fearsome, while Neeman attempted to mount an offense of his own with Blade Splicer. However, Gräfensteiner's next attack put Neeman on 9 and notched his own life total up to 23. 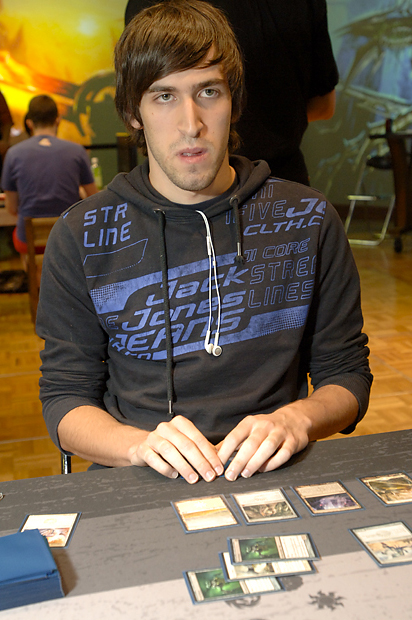 A Tempered Steel for Neeman set up an attack with Signal Pest, Blade Splicer, and a golem token that knocked Gräfensteiner down to 13, but even with the ability to attack for huge chunks of damage at a time, Neeman needed to draw something fast in order to stop Gräfensteiner's aerial assault.

Neeman used a Dismember to take out Gräfensteiner's Glint Hawk, but between the life that he paid to cast Dismember and the attack Neeman, he found himself on a meager 2 life.

Neeman played a second Tempered Steel and attacked with all of his creatures, but Gräfensteiner had enough chump-blockers to survive the attack, allowing him to then swing in for lethal in the air.

Neeman opened the second game with a couple of Vault Skirges and a couple of Origin Spellbombs, while Gräfensteiner had a Vault Skirge, a Spined Thopter and a turn-three Tempered Steel. 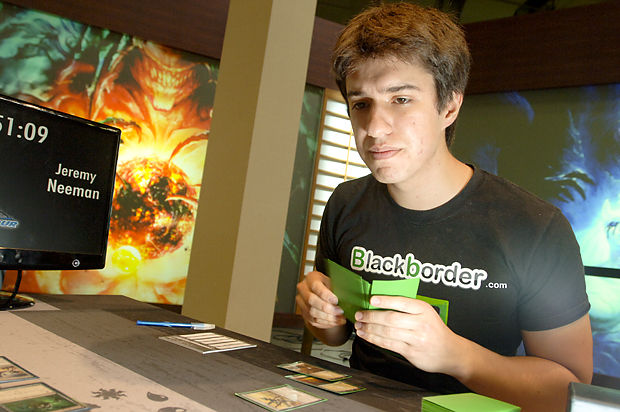 Antipodal hero Jeremy Neeman tries to keep the wheels on.

After taking a big hit from Gräfensteiner's Tempered Steel–enhanced army, Neeman attacked with two Vault Skirges and a Myr token, only to see them all fall to a Marrow Shards from the tapped-out Gräfensteiner.

Neeman's Hero of Bladehold got Dispatched, and while Neeman was able to get his opponent's Tempered Steel off the board thanks to Leonin Relic-Warder, he was unable to answer Gräfensteiner's fliers. A blank draw from Neeman later and Gräfensteiner was able to win his second game in a row with his fliers.