Round 13: Stefano Fiore vs. Gabriel Nassif 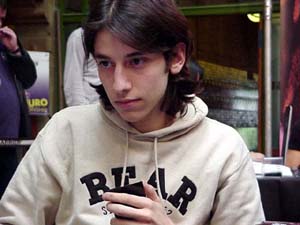 Stefano Fiore has been having a great year. He had a Top 8 at Grand Prix-Lisbon and recently became the Italian National Champion. Across the table sits Gabriel Nassif, one the good young French players in the Pro Tour circuit (and a Team Pro Tour finalist this year). They are both 3-2 in this moment and a win here could push them further up for some extra cash.

Nassif started things with turn two Merfolk Looter. Fiore chose not to use Fire/Ice on it but cycle it instead. A Careful Study from Nassif dumped Roar of the Wurm into the graveyard.

The Looter was a bit of a problem so Stefano finally bounced it with Repulse, but not before Gabriel could answer with Arrogant Wurm. Flametongue Kavu took care of that on the next turn.

In came the Looter again but Stefano Fiore was in full control: he had another Flametongue Kavu to kill it. The French wasn't completely helpless as well, be brought back the Roar token and used Fire/Ice to kill a Flametongue Kavu.

The token wasn't big enough to scare Fiore who used another Fire/Ice and ANOTHER Flametongue Kavu to kill it. Keeping in theme, Nassif used ANOTHER Fire/Ice to kill one of the Kavus.

Meddling Mage got countered but the remaining Kavu got Nassif to two life. The French begged for help and the deck delivered a Violent Eruption. He followed that with Wild Research and Stefano once again pounded his deck.

Perhaps scared the deck yielded a Fire/Ice. He played and when Nassif tutored up Circular Logic he had the Gainsay—yes, in the main deck—to back it up.

Again Nassif came out with second turn Looter but despite his humorous pleads Fiore had the Fire/Ice to kill it. The French replaced it with Wild Mongrel and Fiore played Meddling Mage, naming Arrogant Wurm. A Careful Study allowed Nassif to dig up for help and throw away a useless Arrogant Wurm.

The Italian tried to play Meddling Mage and they traded Gainsays before Pikula came into play naming Violent Eruption. He followed that with Sunscape Familiar before Nassif Looted away Roar of the Wurm.

The huge token came into play and started taking victims. All the Italian could do was shake his head and stare at the two Gainsays in his hand before conceding when two Mongrels joined the Roar token in the Red Zone. 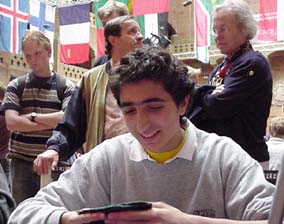 This time Fiore was the one playing Merfolk Looter on the second turn and this time the Looter survived. All Gabriel Nassif could do was play Wild Mongrel. On the next turn Arrogant Wurm came in but Fiore was ready for it, with Flametongue Kavu.

The French thought for a long time before playing the perfect answer: Violent Eruption. Not only did Fiore lose both creatures but he went down to fourteen. The Italian needed some defense and he got it the little shape of Sunscape Familiar, combined with Opposition.

Nassif tried to overwhelm him by playing more creatures but Stefano dropped the elbow: Worship. The Mongrels went about their business of reducing Stefano Fiore's life total but eventually Gabriel would have to solve the Worship problem.

They fought over a Merfolk Looter but the Frenchman got it to resolve. Fiore tried to get a second creature into play but Nassif had Circular Logic for the Lightning Angel. Visibly upset the Italian struck his deck but got little help.

Stil, when his life totals reached one his opponent seemed unable, or unwilling, to blow the Familiar away. Finally the Italian found a second creature and tried to play Flametongue Kavu. Again, Nassif countered. A few turns later, with both players praying for help the situation repeated itself.

Turn after turn they drew useless cards, as their mutual incredulity raised. Finally, just as Nassif got his second Looter online, on the following turn he found a Flametongue Kavu to kill Fiore's only creature to win the game.