Round 13: Stuart Wright vs. Sam Gomersall 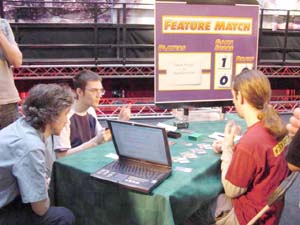 Two more rounds to go and England actually stands a chance of placing someone not named John Ormerod into the Top 8 of a major event for the first time in about a billion years. Sam Gomersall has been quietly racking up a number of money finishes at GP's and PT's, but is still lacking that breakout performance, despite making it onto the train earlier this year. Stuart Wright is a solid English player looking for a chance to prove himself on the international circuit. Gomersall needs to win out to make Top 8 whereas a win here would make it close to a lock for Wright. It will be tough though, as he's running Red-Green against Gomersall's Wake deck.

Wright mulliganed but came racing out the blocks with Grim Lavamancer and Wild Mongrel. Gomersall got the vital turn two Compulsion and then cast Duress.

"How Lucky are you! Random Duress!" Wright said as Gomersall plucked an Elephant Guide from Wright's hand.

"That wasn't supposed to be good in this matchup."

Wright bolted to the dome and then summoned a Phantom Centaur.

Gomersall Compulsioned and then put them all in the bin with a Wrath of God.

Wright came back with a second Centaur and then had to try and beat his way through Gomersall's Moment's Peace. Gomersall was looking strong as Compulsion and other card drawing dug through his deck. 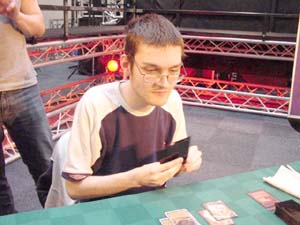 Wright stuck a Guide on the Centaur and bashed. Gomersall hampered his efforts with a Renewed Faith. Wright sent a Hammer to the head.

"Sod it," Gomersall said, flashing back the Deep Analysis and dropping to precarious 1 life.

Unfortunately sometimes Wake just doesn't do anything and this time was one of them as none of the cards helped out and Gomersall couldn't stop the Guided Centaur bashing his head in on the next turn.

Wright came haring in again in the second game: Lavamancer followed by Rootwalla and then a 2 point bolt to the head. Wright Guided up the Lavamancer and bashed Gomersall to 12. He took it, pulling two land out of the deck with a Verge and then passing turn again.

Wright swung again and the damage was negated with Moment's Peace. Wright added an Elephant to the mix with Call of the Herd, giving Gomersall something to ponder. He let it in and gained 5 life with Renewed Faith. 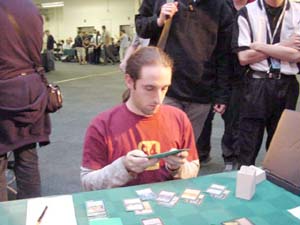 Next turn Gomersall tapped 5 mana for Mirari giving Wright a window to batter with his forces. Unsummon sent the Guided Lavamancer packing and Gomersall took six plus another off his City of Brass to drop back to 10 life.

Gomersall laid another land and passed turn with a Mirari looking threatening. Wright surged forward again and the damage was prevented by a flashed back Moment's Peace.

Sulfuric Vortex provided hope, but as Wright had drawn Karplusan Forests over Forests he was actually on less life. Red-Green has burn though, while Wake doesn't. Unfortunately despite the Mirari in play Gomersall had run out of cards.

Eruption, Hammer and then Firebolt brought the game to a savage end.