Round 13: Takayuki Nagaoka vs. Ryo Ogura 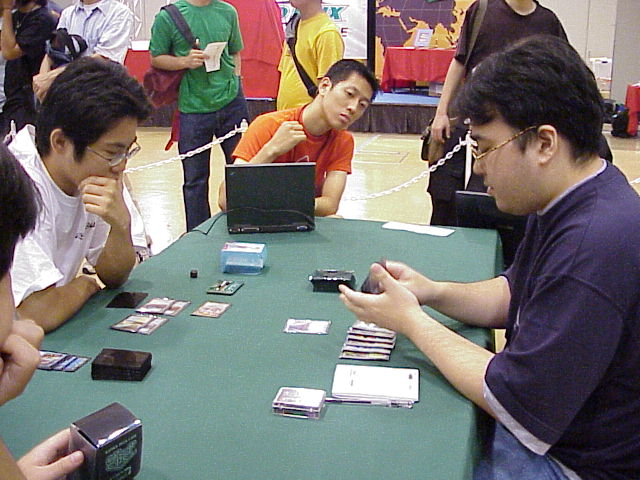 Ogura got off to a bad start, double-mulliganing past two hands with only one land between them. He bounced back as best he could, matching Nagaoka's Stormscape Apprentice with Meddling Mage (blocking other Mages), and a Goblin Legionnaire. Nagaoka held off tapping to Exclude Ogura's Galina's Knight.

Nagaoka Repulsed the Mage, but held back on his many lands and counterspells. With Ogura unwilling to add more pressure, Nagaoka was free to Harrow. Ogura took the opportunity to Fact or Fiction into Urza's Rage, Angelic Shield, Coastal Tower, Battlefield Forge and Galina's Knight. He scored the Shield and Rage.

Nagaoka untapped. He had plenty of options at his disposal. He chose to make a Meddling Mage, blocking out other Mages. He tapped down Ogura's Legionnaires, depriving himself of white mana. Ogura went for a main-phase Fact or Fiction that turned over two Absorbs, two plains and a Legionnaire. He sent the counters to the graveyard and picked up the rest of the cards.

Ogura's situation dimmed when Nagaoka Repulsed his Legionnaires at end of turn. He discarded the unplayable Meddling Mage and turned things over to Nagaoka. He, in turns swung for two and gave it back. He was even kind enough to let one of the Legionnaires resolve. The other he Absorbed.

Ogura untapped and played Angelic Shield. He bounced the hippo and swung for two. Nagaoka played Fact or Fiction and the only card he wanted was Mystic Snake. He was the recipient of a Prophetic Bolt from Ogura, falling to eight. 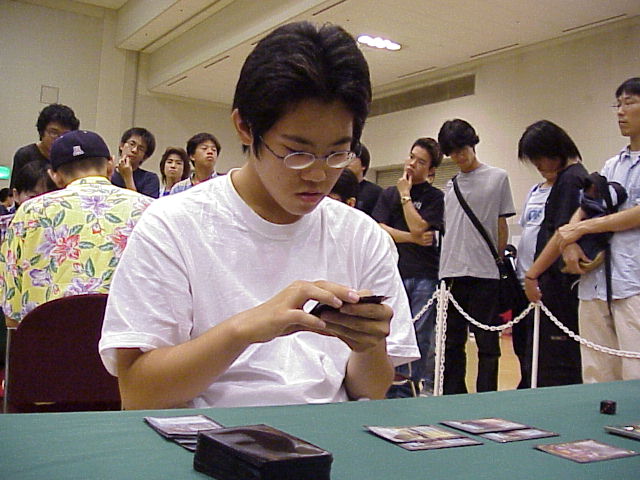 Nagaoka dropped Questing Phelddagrif. Ogura bided his time. He stopped the hippo with his Legionnaire and shot Nagaoka in the neck. He played Fact or Fiction at end of turn, but Nagaoka had drawn an Absorb. This meant that the second Urza's Rage Ogura drew would not be enough to take the game. The hippo took him down next turn.

Then it was Nagaoka's turn to visit Paris twice. His third hand had three lands in it, so he was overjoyed. He was less than thrilled when Ogura blazed out of the gates with Meddling Mage (stopping other Mages) and Goblin Legionnaire. Nagaoka tried to Repulse and slow the beats, but Ogura was ready with Disrupt. Ogura even had Gainsay for Fact or Fiction.

Nagaoka tried a second Fact or Fiction, and this one resolved into Fact or Fiction, Meddling Mage and three land. He surveyed the travesty before him, checked his life total, the laughed and packed it in. The whole affair took five minutes.

Nagaoka led game three with a Meddling Mage stopping Flametongue Kavu. Ogura's deck was uncharacteristically slow, having played only an Angelic Shield by turn three. Nagaoka, meanwhile, was in high gear, playing out five lands and sitting on a powerhouse hand. 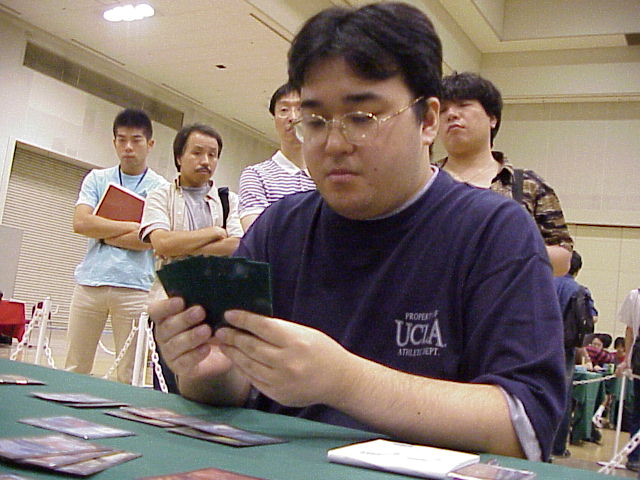 Ogura Raged the Mage. He untapped and sighed at his predicament. Nagaoka had a full hand, forcing him to play carefully. Goblin Legionnaires were blocked by Absorb, but Ogura overtrumped with Gainsay. Nagaoka thought hard before letting it go.

He untapped and kicked up a Kavu Titan, a monster Ogura would have a hard time handling. Ogura thought hard before going for a Lightning Angel, blowing his Shield to bounce the Titan, and sending for five. Nagaoka replayed his monster.

Ogura's Angel struck again. Nagaoka drew a second Titan. He swung with the first, then played the second unkicked. Ogura sensed victory. He Iced the untapped Titan, meeting Nagaoka's Absorb with Gainsay. He then untapped, swung for five, played an extra land to get around potential Disrupts, and played Prophetic Bolt for the win.