Round 13: Takuya Oosawa vs. Tsuyoshi Fujita 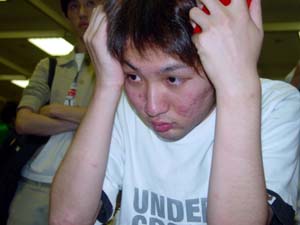 Oosawa's traveled quite a bit, making a top 4 performance at this season's Grand Prix Hong Kong. He has a decent shot at making it into the top 8 this weekend. Tsuyoshi Fujita's credentials need not be repeated here. Today he's sporting a quite nice Hawaiian ensemble and looks quite relaxed. Oosawa is playing Ravager Affinity, while Fujita is playing the new Red/Green aggression deck with scads of removal. With Fujita's speed and artifact removal, Oosawa was going to fight an uphill battle.

Oosawa won the die roll and played first. Finding his hand of four land, a Myr Enforcer, a Chromatic Sphere, and a Welding Jar to be inferior, he sent it back to get a hand with four artifact lands, a Myr Enforcer, and a Chromatic Sphere. Spectators witnessed this mulligan with surprise. (Oosawa was quite meticulous in shuffling.) He avoided going to five cards and kept the hand. Fujita liked his hand with Siege-Gang Commander, Sparksmith, and Oxidize.

Oosawa dropped his Chromatic Sphere on turn 1. He then followed up with a Welding Jar on turn 2. Fujita had a Sparksmith for his second turn. Oosawa played his enforcer and cycled his Sphere, but ended up with a handful of land. In a deck that runs 16 or 17 land normally, this draw is catastrophic. Fujita played a Goblin Sharpshooter on his third turn, and followed up by Oxidizing the Enforcer.. Oosawa managed to topdeck an Arcbound ravager, but it ran up against stiff opposition as Fujita played a Siege-Gang Commander. Oosawa was able to kill the Sharpshooter with a Shrapnel Blast, but the Ravager couldn't save him as Fujita found a second Siege-Gang Commander and barreled through for the kill. 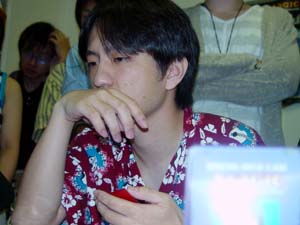 Despite winning the first game, Fujita looked frustrated, lying his head on the table for a minute while Oosawa sideboarded and then took a mulligan. Oosawa's new hand was all black lands and red spells. Electrostatic Bolt and Shrapnel Blast could do well, provided he drew red mana. Oosawa played a Vault of Whispers and dropped an Arcbound Worker. He followed that up with a Great Furnace and Frogmite. Fujita responded by playing a Sparksmith after fetching a forest with Wooded Foothills. The Frogmite and Arcbound Worker turned sideways, but Fujita played a Viridian Shaman on his turn targetting the Great Furnace. Oosawa tapped the Furnace for red mana (the last red mana he would have in his game) and sacrificed it to fuel a Shrapnel Blast to Fujita's Sparksmith. Oosawa could only come up with another Vault of Whispers and a Disciple of the Vault. Fujita answered back with another Sparksmith and a Skullclamp, attaching it to the Viridian Shaman. Oosawa could only look on as Fujita's Sparksmith killed the Disciple and played a huge Goblin Goon. With 2 creatures to Fujita's three, Oosawa's future looked grim.

That futute was short indeed, as Oosawa proceeded to draw nothing more helpful than another Vault of Whispers. Fujita cleared away the last of Oosawa's defense, then used Skullclamp on his Sparksmith to replentish his hand. After a Clickslither, Oosawa packed it up.