abriel Nassif and Antonino De Rosa were teammates for this Pro Tour, contributing to the same mailing list as current first-place competitor Mark Herberholz. Nassif is actually playing the same deck as Heezy, while Antonino and Ben Rubin split off and went with the mono-red deck the list had worked on. With both players sitting at three losses and four rounds left to go, a loss here would likely knock one of the competitors out of Top 8 contention. 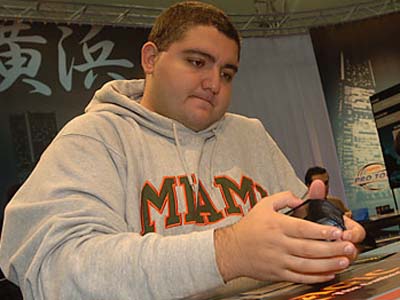 "Switch decks for this round?" asked Nassif. "No way!" De Rosa popped back. "Not because I think my deck is that much better, but because I have no idea what to do with that deck. All those choices with Mystical Teachings—it would hurt my head." This was amusing at least partly because De Rosa has played control decks to great success in the recent past, and partly because he had obviously tested the deck extensively somewhere along the way.

"Nooo, he got it! Can't win!" That was Nassif's exclamation when De Rosa suspended a first turn Greater Gargadon. Ant followed with Keldon Marauders on turn two, a card he admitted was the worst of his two-drops in this matchup, but at least it was something. For his part, Nassif built his mana with a pair of Prismatic Lenses. Nassif suspended Aeon Chronicler for 1 on turn four, and Ant flashed Sulfur Elemental into play at the end of the turn, dropping Nassif to 12 on the subsequent attack. Word of Seizing stole the avatar on De Rosa's next turn, and Ant attacked. Nassif responded with Mystical Teachings into Pull from Eternity on De Rosa's Greater Gargadon, forcing Ant into a bind. He could wipe out his own attack to put the Gargadon into play, or keep his Elemental but drop himself to one land, or lose his best threat. Ant chose option 1, leaving Nassif at 9, but giving him a major boom boom on the next attack.

Sadly for the Italian Stallion, Damnation cleared the board a turn later. Draining Whelk from Nassif countered De Rosa's Suq'Ata Lancer and De Rosa was now under pressure. A couple card drawing spells, a couple of counterspells, and 5 attacks from the Whelk meant De Rosa was frowning severely as he shuffled up for Game 2. 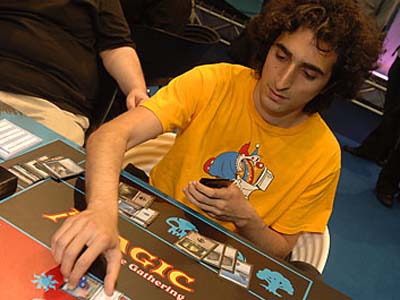 De Rosa led off in Game 2, playing Blood Knight on turn two and flashing in Sulfur Elemental at the end of turn three. Nassif went filthy on his fourth turn, playing Teferi's Moat on red and then doubling down with a second a turn later. Ewwww. Now De Rosa would have to burn Nassif out from 13 if he wanted to win. Or, he could fly on the back of Dragon Whelp, assuming it lived long enough to attack. Sudden Death made sure it did not.

"Tell me when you have me locked down, okay? You have a really good hand?" asked Ant.

Nassif replied, "It's okay. It doesn't do much, but you don't have me very close to dead either."

"Well tell me when it's locked up, will you? You know my decklist—I don't want to sit here all day if I just can't win."

They played a couple more turns, but eventually De Rosa offered to concede if Nassif flashed a counterspell. Gab showed the Cancel in hand, and Antonino wished his teammate good luck in the next round.