Round 13: Tomohiro Yokosuka vs. Yoshitaka Nakano 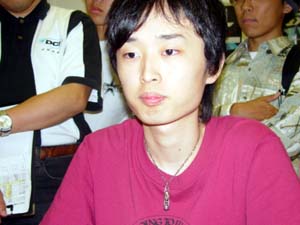 may not be familiar with Tomohiro Yokosuka, but he has a Pro Tour Top 8 to his name. Now, he's two rounds away from playing in tomorrow's Top 8, and adding more to his reputation. Yoshitaka Nakano is a local player from Osaka, who playtests with Tsuyoshi Fujita, Masahiko Morita and Masashiro Kuroda. With that kind of backup, success shouldn't be surprising. This is not to say that he's lacking playskill either, as he made Top 8 at Grand Prix Hiroshima.

Yokosuka mulliganed his opening hand. Nakano played Skirk Prospector on turn two, and sacrificed it on turn three to accelerate out Goblin Goon. Yokosuka played Silver Knight to stop the 6/6 dead in its tracks, so Nakano played another one. Both attacked to get six damage through, and Yokosuka played Viridian Shaman as a simple Gray Ogre. Electrostatic Bolt killed the Shaman, and the Goons charged in for six more. Nakano was now at seven, but he played Pristine Angel to give him another great blocker for the Goons. Nakano had strength in numbers, however, as he played a Warchief, Prospector and Sledder, and attacked with everyone. After combat, the Prospector allowed Sharpshooter to come out, and that did the rest. 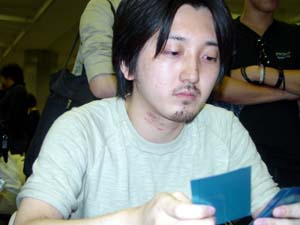 Once again, Yokosuka mulliganed to six. He winced at his new hand, and decided to keep it after some agony. Nakano had a first turn Prospector, and Yokosuka slid the top card off of his library. He paused, looked at it, and sighed as he realized it wasn't a land. A second land came a turn later, but even after cycling Renewed Faith, Yokosuka was stuck. Meanwhile, Nakano accelerated Clickslither out thanks to the Prospector. A second one came out on turn four, and Siege Gang Commander on turn five ended the game.